عنوان انگلیسی
Resilience in a community sample of children of alcoholics: Its prevalence and relation to internalizing symptomatology and positive affect
دانلود فوری مقاله + سفارش ترجمه 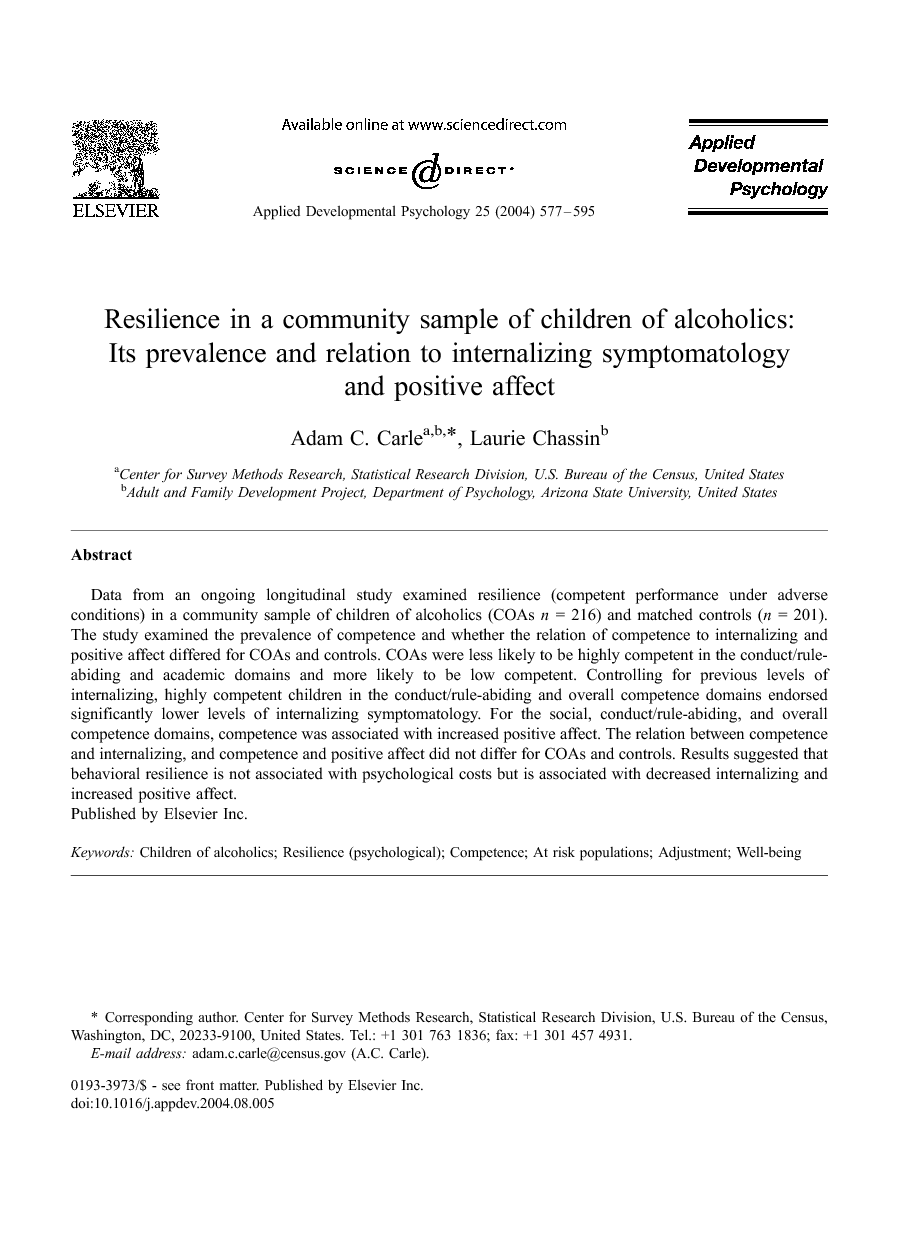 Developmental psychopathologists have identified a number of risks associated with the development and onset of psychological disorder (Cicchetti & Garmezy, 1993). However, not all children exposed to risk develop pathology (Cowen & Work, 1988, Garmezy, 1985, Masten, 1990, Rutter, 1979, Werner, 1993 and Werner & Smith, 1982). These children are considered to be resilient and are those individuals who, despite high-risk status, manage to defeat the odds (Garmezy & Neuchterlein, 1972). Knowledge of why some children manage to escape the effects of risk factors, while others do not, can lead to effective prevention and intervention strategies designed to promote mental health (Cowen, 1991 and Cowen & Work, 1988). For example, encouraging competent behavior in children at risk may lead to increased emotional adjustment and decreased internalizing symptomatology, providing clinicians a route to combat the effects of children's negative life experiences. The current study examined the relation of resilience to internalizing symptomatology and positive affect in children of alcoholic parents (COAs), a relatively understudied risk group in the resilience field. Resilience has been defined a number of ways, but is often characterized as successful adaptation, despite risk (Masten, Best, & Garmezy, 1990), with successful adaptation defined as competent performance (Masten & Coatsworth, 1995). Masten et al. (1999) have described competence as “a pattern of effective performance in the environment, evaluated from the perspective of development in ecological and cultural context” (Masten & Coatsworth, 1995, p. 724). Within this perspective, successful resolution of culturally salient developmental tasks marks competence. Masten et al. (1995) identified three developmental tasks in late childhood/early adolescence corresponding to three domains of competence: academic achievement, conduct/rule-abiding behavior, and social relationships. Successful performance in these areas reflects competence. The concept of resilience also requires exposure to a risk factor. For children exposed to the risk factor, there is an increased probability of developing psychopathology (Kraemer et al., 1997). Resilience has been studied across a number of groups: children exposed to adverse socioeconomic disadvantage ( Garmezy, 1981, Garmezy, 1985, Rutter, 1979 and Werner & Smith, 1982), children of schizophrenic mothers (Garmezy, 1984), maltreated children (Cicchetti & Rogosch, 1997), children exposed to urban poverty and violence (Luthar, 1999 and Richters & Martinez, 1993), children with chronic illness (Wells & Schwebel, 1987), children of divorce (Hetherington & Stanley-Hagan, 1999), and children exposed to catastrophic life events (Wright, Masten, Northwood, & Hubbard, 1997). These studies have sought to identify whether positive outcomes exist for these children, as well as whether specific factors lead to resilient outcomes (Luthar, Cicchetti, & Becker, 2000). Although the focus of these studies has differed, they have consistently identified resilient children. Unfortunately, resilience has been relatively understudied in a number of important risk groups, among them, children of alcoholic parents. As compared to their peers in nonalcoholic families, children of alcoholic parents are reported to be at increased risk for a number of negative outcomes, including internalizing and externalizing symptomatology and substance abuse (Chassin et al., 1991, McGue et al., 1996, Moos & Billings, 1982, Roosa et al., 1988 and Tubman, 1993). Furthermore, parental alcoholism is a relatively prevalent risk factor, with estimates suggesting that one in four children in the United States is exposed to alcohol dependence or abuse in the family (Grant, 2000). The relatively high prevalence of parental alcoholism, combined with the associated negative impact, places a large number of children at risk (West & Prinz, 1987). Unfortunately, little research has examined resilience in children of alcoholic parents. A few studies have examined ‘protective’ factors leading to the absence or low levels of negative outcomes among children of alcoholic parents. Farrell, Barnes, and Banerjee (1995) noted that family cohesion was negatively related to psychological distress, deviant behavior, and heavy drinking in adolescents over a period of 1 year. Hussong and Chassin (1997) found that family organization, higher perceived control, and high levels of cognitive coping were associated with a decreased likelihood of substance use initiation, regardless of parental alcoholism status. Although these studies represent important findings examining protective factors in children of alcoholic parents, they are few in number, fail to address the possibility of positive outcomes in children of alcoholic parents, and do not address issues of mental health in relation to competent behavior. One debate in the study of competence is whether effective performance, defined by behavioral criteria (e.g., academic achievement, conduct/rule-abiding behavior), also predicts positive psychological adjustment (Luthar & Zigler, 1991). In a cross-sectional study of inner city children, Luthar (1991) found that resilient children displayed more depression and anxiety than did competent children at similar levels of behavioral competence but not experiencing risk. Luthar, Doernberger, and Zigler (1993) replicated this finding in a larger sample and included a prospective design. The authors suggested that, for children from stressful backgrounds, the costs of maintaining competent behavior in the face of stress may be too high and may result in internalizing symptoms. However, these findings have not been consistent within the field. For example, Masten et al. (1999) found that resilient children showed significantly less internalizing symptomatology and higher levels of positive affect than nonresilient children. They proposed a ‘pleasure in mastery’ explanation, such that successful resolution of developmental tasks (i.e., competence) is pleasurable and encourages positive emotional outcomes in resilient children. The question of whether behavioral competence among children at risk promotes positive emotional adjustment has not been adequately examined among children of alcoholic parents. It is uncertain whether efforts to increase competent behavior in children of alcoholic parents would lead to similar positive changes in mental health. Clinical observations have hypothesized that there may be a relationship between resilience and internalizing symptoms for adult children of alcoholic parents. Sher (1991), in a review of the clinical literature, discussed the “hero” child who is depressed and anxious despite outward evaluations of success, similar to the model proposed by Luthar, 1991, Luthar, 1995 and Luthar et al., 1993. Empirical tests of this notion in adolescent children of alcoholic parents are lacking. Two studies tested the relation of positive outcomes to internalizing symptoms in adult children of alcoholic parents (Hinz, 1990 and Tweed & Ryff, 1989) and found that positive outcomes in adult children of alcoholic parents were related to increased internalizing symptoms. However, results were based on retrospective report, did not include a comparison group of nonresilient adult children of alcoholic parents, and were cross-sectional in nature.