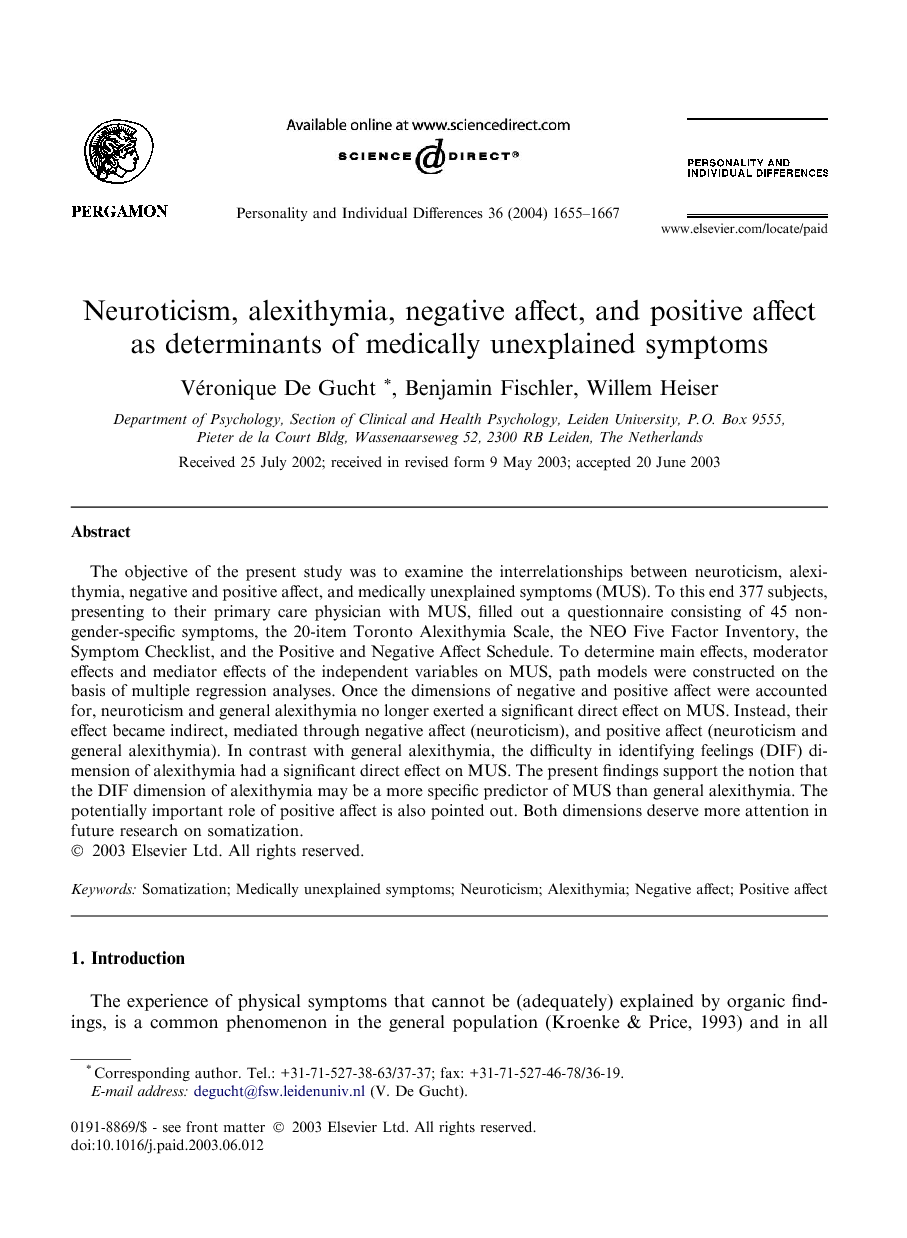 The objective of the present study was to examine the interrelationships between neuroticism, alexithymia, negative and positive affect, and medically unexplained symptoms (MUS). To this end 377 subjects, presenting to their primary care physician with MUS, filled out a questionnaire consisting of 45 non-gender-specific symptoms, the 20-item Toronto Alexithymia Scale, the NEO Five Factor Inventory, the Symptom Checklist, and the Positive and Negative Affect Schedule. To determine main effects, moderator effects and mediator effects of the independent variables on MUS, path models were constructed on the basis of multiple regression analyses. Once the dimensions of negative and positive affect were accounted for, neuroticism and general alexithymia no longer exerted a significant direct effect on MUS. Instead, their effect became indirect, mediated through negative affect (neuroticism), and positive affect (neuroticism and general alexithymia). In contrast with general alexithymia, the difficulty in identifying feelings (DIF) dimension of alexithymia had a significant direct effect on MUS. The present findings support the notion that the DIF dimension of alexithymia may be a more specific predictor of MUS than general alexithymia. The potentially important role of positive affect is also pointed out. Both dimensions deserve more attention in future research on somatization.

The experience of physical symptoms that cannot be (adequately) explained by organic findings, is a common phenomenon in the general population (Kroenke & Price, 1993) and in all medical settings (Escobar, Waitzkin, Cohen Silver, Gara, & Holman, 1998; Fink, 1992). In their chronic or recurrent form, they lead to an increased utilization of health care resources, increased disability, and an elevated number of days off work (Fink, Sörensen, Engberg, Holm, & Munk-Jorgensen, 1999; Kroenke et al., 1997; Smith, 1994). This clinical phenomenon has attracted a number of names, including the term somatization, which is widely used by psychiatrists and psychologists. Although a broad definition of somatization is synonymous to the presentation of physical symptoms that cannot be (adequately) explained by organic findings (Kellner, 1990), the term somatization has been variously defined (De Gucht & Fischler, 2002), and often entails assumptions regarding etiology (Bridges & Goldberg, 1985). In order to avoid this problem and allow the etiology of such symptoms to be investigated independently, Mayou (1993) proposed the use of a more general, theoretically neutral, term, such as non-organic physical symptoms or medically unexplained symptoms (MUS). For the purpose of this study, the term MUS was preferred. A large number of factors have been studied in order to account for the phenomenon of MUS, including a number of personality traits, considered to be risk factors for its development and/or persistence. One of them is neuroticism, defined as “a broad dimension of individual differences in the tendency to experience negative distressing emotions” (Costa & McCrae, 1987, p. 301). Neuroticism has repeatedly been demonstrated to be related to the presentation of MUS (Costa, 1987; Costa & McCrae, 1987; Russo et al., 1997; Vassend, 1994). Another trait dimension that has been hypothesized to play a role in the development of MUS, is alexithymia (Sifneos, 1973). This dimension, which literally means `no words for feelings', is considered to reflect a deficit in the cognitive processing and regulation of emotions (Bagby & Taylor, 1997). Although the results of empirical research have demonstrated the existence of an association between alexithymia and MUS (Taylor, 1997), both the magnitude and specificity of this association remains to be established (De Gucht & Heiser, 2003; Kooiman, 1998; Lundh & Simonsson-Sarnecki, 2001). In addition, the constituting dimensions of alexithymia relate differently to MUS, suggesting that these dimensions have greater discriminant validity than general alexithymia (De Gucht & Heiser, 2003; Kooiman, 1998). Next to personality factors, the experience of psychological distress, especially anxiety and depression, has been considered to be an important factor in the development of MUS. This has led a number of authors to define somatization as a somatic equivalent of psychological distress (Bridges & Goldberg, 1985; Katon, Ries, & Kleinman, 1984; Lipowski, 1987). Empirical research has demonstrated a high degree of comorbidity between the presentation of MUS, and anxiety and depression, both on a symptom and syndrome level (Fink, 1995; Simon, Gater, Kisely, & Piccinelli, 1996; Simon & Von Korff, 1991). Although, from a theoretical perspective, anxiety and depression are closely related to positive as well as negative affect (Clark & Watson, 1991), the dimension of positive affect, especially defined as a state variable, has not often been studied with respect to MUS (Adler, Horowitz, Garcia, & Moyer, 1998; Billings, Folkman, Acree, & Moskowitz, 2000; Brown & Moskowitz, 1997; Lundh & Simonsson-Sarnecki, 2001). It is a well-known fact that, in addition to being related to the experience of MUS, neuroticism, alexithymia, and psychological distress are also (highly) intercorrelated (Bagby, Taylor, & Parker, 1994b; Hendryx, Haviland, & Shaw, 1991; Honkalampi, Hintikka, Tanskanen, Lehtonen, & Viinamäki, 2000; Luminet, Bagby, Wagner, Taylor, & Parker, 1999). Studies that have looked at the respective contribution of each of these factors to the experience of MUS are however scarce (Deary, Scott, & Wilson, 1997; Lundh & Simonsson-Sarnecki, 2001). In the present study, the contribution of alexithymia to the phenomenon of MUS was studied within the context of its relationship with neuroticism, state negative affect (psychological distress), and state positive affect. The specific research questions of the study are: (1) Do the different dimensions of alexithymia relate differently to MUS? (2) Can we find evidence for the fact that neuroticism and alexithymia directly influence the experience of MUS, or should they be considered vulnerability factors that influence the experience of negative or positive affective states, which in turn leads to MUS? In other words, can we find evidence for direct and/or indirect effects of the personality traits under study on MUS? In the event of indirect effects, we hypothesize these to be mediated through the presence of negative affective states (psychological distress) and/or the absence of positive affective states; (3) Are there any interaction effects between the personality traits neuroticism and alexithymia on the one hand, and the affective state dimension on the other hand. In other words, to what extent does affective state have a moderating effect on the relation between neuroticism/alexithymia and the experience of MUS?