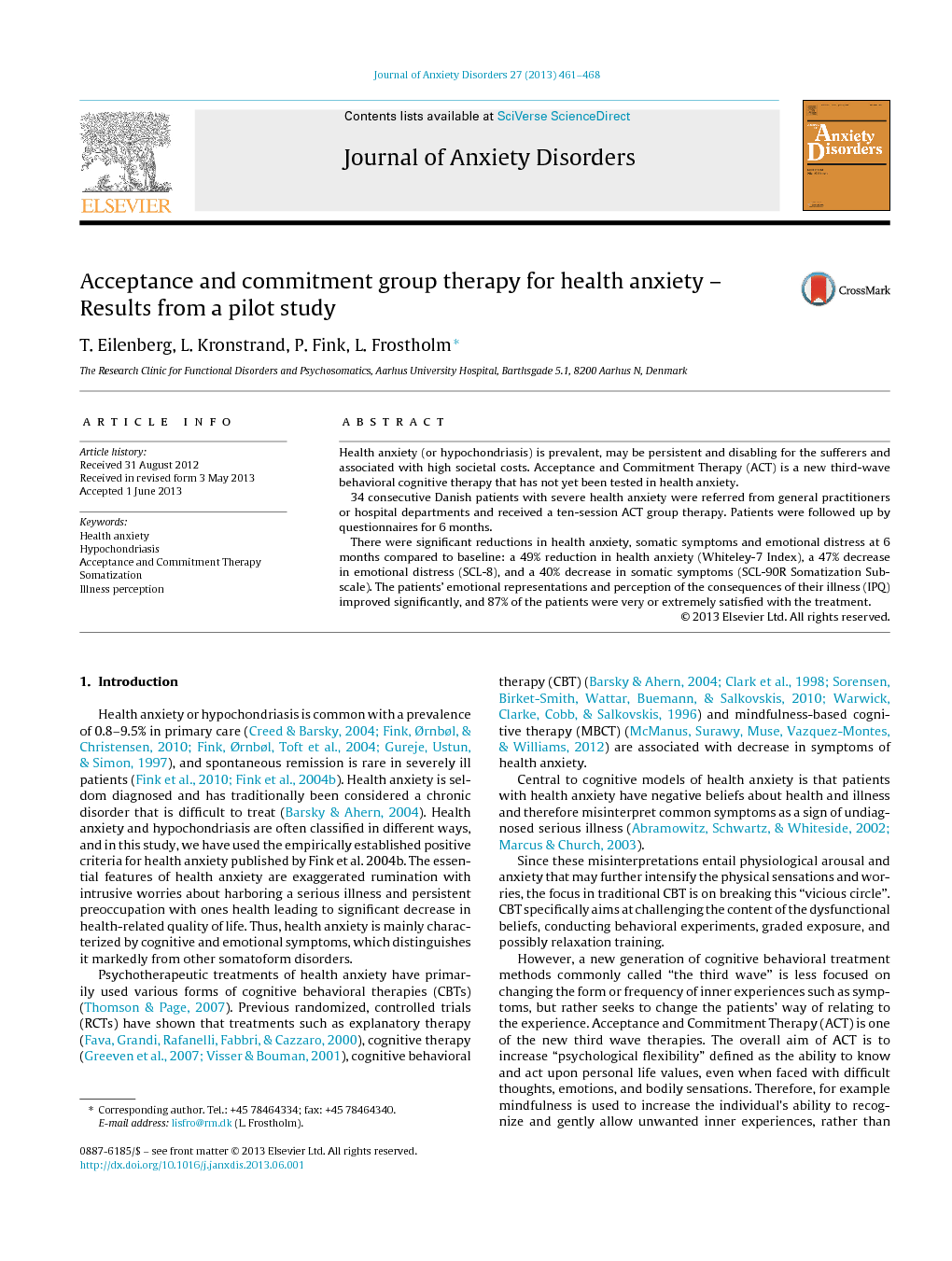 Health anxiety (or hypochondriasis) is prevalent, may be persistent and disabling for the sufferers and associated with high societal costs. Acceptance and Commitment Therapy (ACT) is a new third-wave behavioral cognitive therapy that has not yet been tested in health anxiety. 34 consecutive Danish patients with severe health anxiety were referred from general practitioners or hospital departments and received a ten-session ACT group therapy. Patients were followed up by questionnaires for 6 months. There were significant reductions in health anxiety, somatic symptoms and emotional distress at 6 months compared to baseline: a 49% reduction in health anxiety (Whiteley-7 Index), a 47% decrease in emotional distress (SCL-8), and a 40% decrease in somatic symptoms (SCL-90R Somatization Subscale). The patients’ emotional representations and perception of the consequences of their illness (IPQ) improved significantly, and 87% of the patients were very or extremely satisfied with the treatment.

Health anxiety or hypochondriasis is common with a prevalence of 0.8–9.5% in primary care (Creed and Barsky, 2004, Fink et al., 2010, Fink et al., 2004b and Gureje et al., 1997), and spontaneous remission is rare in severely ill patients (Fink et al., 2010 and Fink et al., 2004b). Health anxiety is seldom diagnosed and has traditionally been considered a chronic disorder that is difficult to treat (Barsky & Ahern, 2004). Health anxiety and hypochondriasis are often classified in different ways, and in this study, we have used the empirically established positive criteria for health anxiety published by Fink et al. 2004b. The essential features of health anxiety are exaggerated rumination with intrusive worries about harboring a serious illness and persistent preoccupation with ones health leading to significant decrease in health-related quality of life. Thus, health anxiety is mainly characterized by cognitive and emotional symptoms, which distinguishes it markedly from other somatoform disorders. Psychotherapeutic treatments of health anxiety have primarily used various forms of cognitive behavioral therapies (CBTs) (Thomson & Page, 2007). Previous randomized, controlled trials (RCTs) have shown that treatments such as explanatory therapy (Fava, Grandi, Rafanelli, Fabbri, & Cazzaro, 2000), cognitive therapy (Greeven et al., 2007 and Visser and Bouman, 2001), cognitive behavioral therapy (CBT) (Barsky and Ahern, 2004, Clark et al., 1998, Sorensen et al., 2010 and Warwick et al., 1996) and mindfulness-based cognitive therapy (MBCT) (McManus, Surawy, Muse, Vazquez-Montes, & Williams, 2012) are associated with decrease in symptoms of health anxiety. Central to cognitive models of health anxiety is that patients with health anxiety have negative beliefs about health and illness and therefore misinterpret common symptoms as a sign of undiagnosed serious illness (Abramowitz et al., 2002 and Marcus and Church, 2003). Since these misinterpretations entail physiological arousal and anxiety that may further intensify the physical sensations and worries, the focus in traditional CBT is on breaking this “vicious circle”. CBT specifically aims at challenging the content of the dysfunctional beliefs, conducting behavioral experiments, graded exposure, and possibly relaxation training. However, a new generation of cognitive behavioral treatment methods commonly called “the third wave” is less focused on changing the form or frequency of inner experiences such as symptoms, but rather seeks to change the patients’ way of relating to the experience. Acceptance and Commitment Therapy (ACT) is one of the new third wave therapies. The overall aim of ACT is to increase “psychological flexibility” defined as the ability to know and act upon personal life values, even when faced with difficult thoughts, emotions, and bodily sensations. Therefore, for example mindfulness is used to increase the individual's ability to recognize and gently allow unwanted inner experiences, rather than suppressing, controlling, or ruminating about these. The human tendency of wanting to control or get rid of difficult thoughts, feelings, and sensations is called “experiential avoidance” in ACT terms and is assumed to be a key element in the development of psychological pathology (Fledderus et al., 2010 and Hayes et al., 2011). Third wave therapies are gaining more and more attention, both in research and clinical practice (Hofmann et al., 2010 and Ost, 2008). It is found that RCTs on ACT have an overall moderately strong effect size (Ost, 2008). ACT has not yet been tested in patients with health anxiety, but has shown a positive effect in the treatment of a range of disorders, among others depression, anxiety disorders, chronic pain, drug abuse, and psychotic symptoms (Bach et al., 2011, Dahl et al., 2004, Dalrymple and Herbert, 2007, Forman et al., 2007, Lundgren et al., 2006, Lundgren et al., 2008a and Lundgren et al., 2008bPull, 2009 and Twohig et al., 2006Zettle and Rains, 1989 and Zettle, 2003). There are reasons to hypothesize that ACT may be applicable in the treatment of health anxiety as health anxiety phenomenologically is similar to anxiety disorders in some aspects, e.g. dysfunctional cognitions and rumination leading to misinterpretations of internal or external cues resulting in anxiety (Taylor & Asmundson, 2004). ACT has been applied specifically in RCTs on anxiety disorders, e.g. OCD (Twohig et al., 2010) and mixed anxiety disorders (Arch et al., 2012a and Forman et al., 2007) providing preliminary evidence that ACT may be an effective treatment for anxiety disorders. Furthermore, authors have stressed a relationship between anxiety sensitivity and the ACT term “experiential avoidance” (Arch et al., 2012b and Berman et al., 2010). In this uncontrolled pilot study, we wished to examine the effect and acceptability of ACT group therapy on severe health anxiety as well as assess the study design in terms of assessment procedure, outcome measure, and treatment manual before initiating a randomized, controlled trial. We hypothesize that for patients with severe health anxiety, ACT group therapy is (1) associated with significant reductions in self-reported health anxiety symptoms, somatic symptoms, and emotional distress 6 months after treatment compared to before treatment, (2) acceptable, and (3) associated with significant improvements in the patients’ illness perceptions 6 months after treatment compared to before treatment.