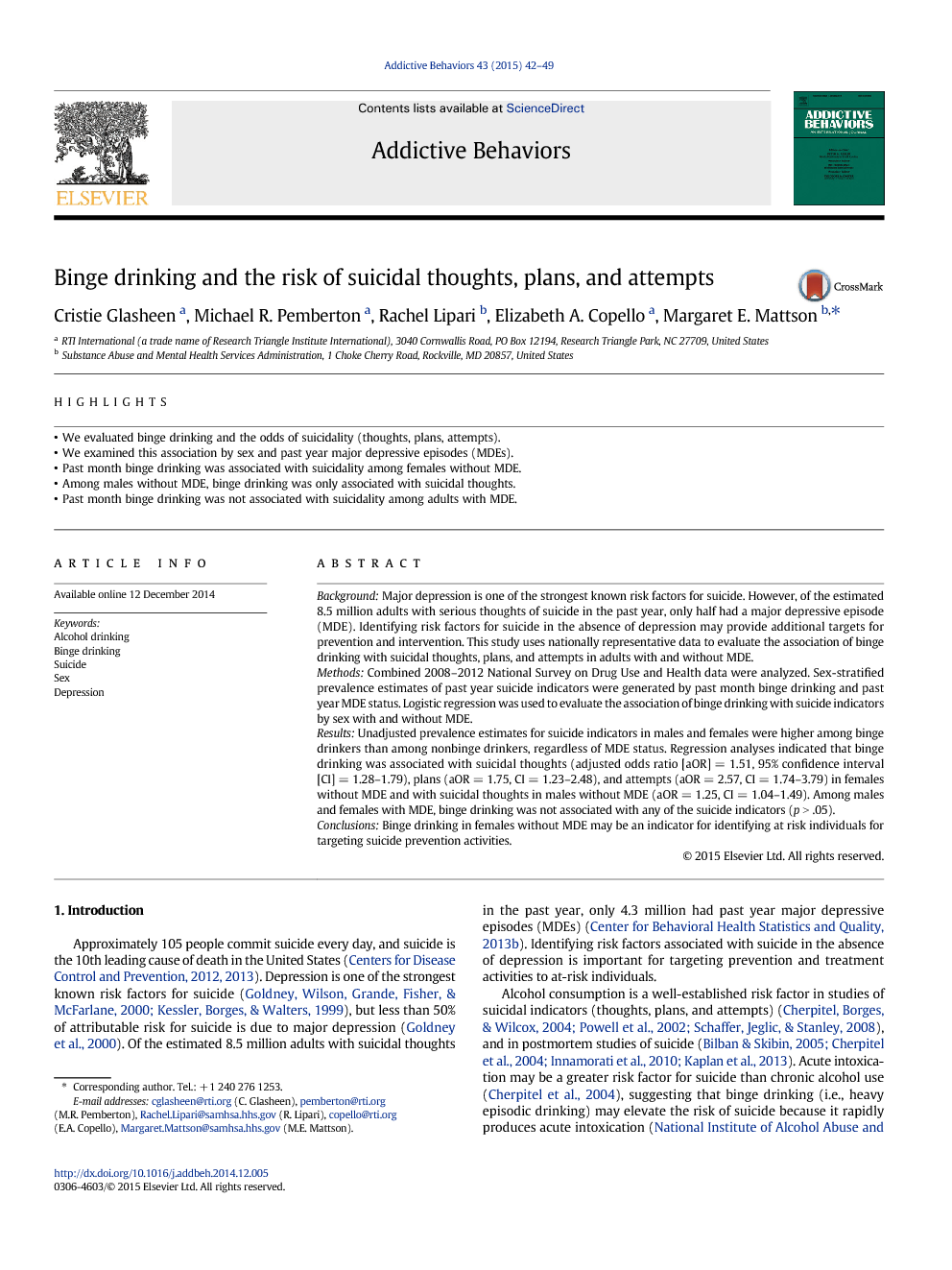 Background Major depression is one of the strongest known risk factors for suicide. However, of the estimated 8.5 million adults with serious thoughts of suicide in the past year, only half had a major depressive episode (MDE). Identifying risk factors for suicide in the absence of depression may provide additional targets for prevention and intervention. This study uses nationally representative data to evaluate the association of binge drinking with suicidal thoughts, plans, and attempts in adults with and without MDE. Methods Combined 2008–2012 National Survey on Drug Use and Health data were analyzed. Sex-stratified prevalence estimates of past year suicide indicators were generated by past month binge drinking and past year MDE status. Logistic regression was used to evaluate the association of binge drinking with suicide indicators by sex with and without MDE. Results Unadjusted prevalence estimates for suicide indicators in males and females were higher among binge drinkers than among nonbinge drinkers, regardless of MDE status. Regression analyses indicated that binge drinking was associated with suicidal thoughts (adjusted odds ratio [aOR] = 1.51, 95% confidence interval [CI] = 1.28–1.79), plans (aOR = 1.75, CI = 1.23–2.48), and attempts (aOR = 2.57, CI = 1.74–3.79) in females without MDE and with suicidal thoughts in males without MDE (aOR = 1.25, CI = 1.04–1.49). Among males and females with MDE, binge drinking was not associated with any of the suicide indicators (p > .05). Conclusions Binge drinking in females without MDE may be an indicator for identifying at risk individuals for targeting suicide prevention activities.

Approximately 105 people commit suicide every day, and suicide is the 10th leading cause of death in the United States (Centers for Disease Control and Prevention, 2012 and Centers for Disease Control and Prevention, 2013, December 30). Depression is one of the strongest known risk factors for suicide (Goldney et al., 2000 and Kessler et al., 1999), but less than 50% of attributable risk for suicide is due to major depression (Goldney et al., 2000). Of the estimated 8.5 million adults with suicidal thoughts in the past year, only 4.3 million had past year major depressive episodes (MDEs) (Center for Behavioral Health Statistics and Quality, 2013b). Identifying risk factors associated with suicide in the absence of depression is important for targeting prevention and treatment activities to at-risk individuals. Alcohol consumption is a well-established risk factor in studies of suicidal indicators (thoughts, plans, and attempts) (Cherpitel et al., 2004, Powell et al., 2002 and Schaffer et al., 2008), and in postmortem studies of suicide (Bilban and Skibin, 2005, Cherpitel et al., 2004, Innamorati et al., 2010 and Kaplan et al., 2013). Acute intoxication may be a greater risk factor for suicide than chronic alcohol use (Cherpitel et al., 2004), suggesting that binge drinking (i.e., heavy episodic drinking) may elevate the risk of suicide because it rapidly produces acute intoxication (National Institute of Alcohol Abuse and Alcoholism, 2004). Several studies support this hypothesis (Archie et al., 2012, Goldstein and Levitt, 2006, Hallfors et al., 2004 and Powell et al., 2002) but have limitations, including the use of small nongeneralizable convenience samples (e.g., college students) (Goldstein & Levitt, 2006), only examining adolescents or young adults (Archie et al., 2012, Hallfors et al., 2004 and Powell et al., 2002). Moreover, these studies did not consider the interactions between binge drinking and depression (Hallfors et al., 2004 and Powell et al., 2002) despite studies suggesting that binge drinking is more prevalent among depressed individuals (Dawson, Grant, Stinson, & Chou, 2005) and predicts the development of depression symptoms (Paljärvi et al., 2009). To date, no nationally representative studies examining the association of binge drinking and suicidal indicators among males and females with and without depression have been identified. This study builds on previous research by using a nationally representative dataset to examine past year suicidal thoughts, plans, and attempts among binge drinking and nonbinge drinking (consumed alcohol but did not binge) adults with and without past year MDEs. Moreover, we provide sex-specific results because previous research suggests that the association between alcohol consumption and suicide may differ in males and females (Goldstein and Levitt, 2006, Innamorati et al., 2010 and Ramstedt, 2005).