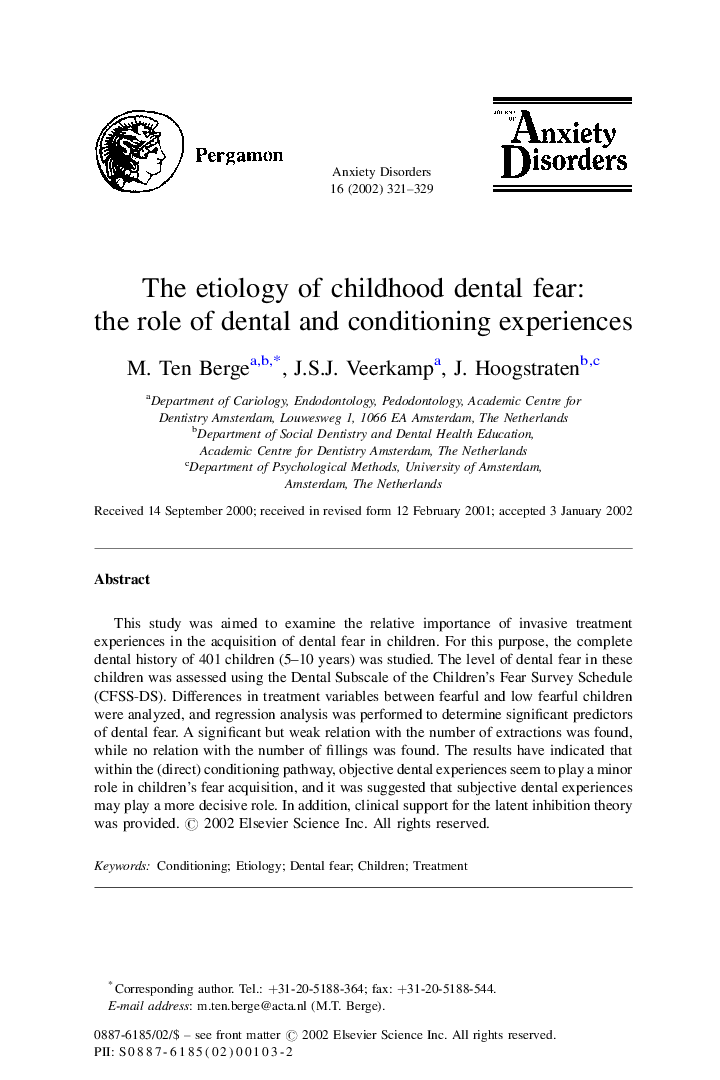 This study was aimed to examine the relative importance of invasive treatment experiences in the acquisition of dental fear in children. For this purpose, the complete dental history of 401 children (5–10 years) was studied. The level of dental fear in these children was assessed using the Dental Subscale of the Children’s Fear Survey Schedule (CFSS-DS). Differences in treatment variables between fearful and low fearful children were analyzed, and regression analysis was performed to determine significant predictors of dental fear. A significant but weak relation with the number of extractions was found, while no relation with the number of fillings was found. The results have indicated that within the (direct) conditioning pathway, objective dental experiences seem to play a minor role in children’s fear acquisition, and it was suggested that subjective dental experiences may play a more decisive role. In addition, clinical support for the latent inhibition theory was provided.

In the literature on the acquisition of fear and phobia, different pathways are described. Rachman (1977) has proposed three pathways: directly through direct conditioning or indirectly via vicarious learning or modeling. Research has provided support for all pathways, although acquisition of dental fear has most often been attributed to the first, that is direct conditioning. In several studies indications for a relation with invasive or painful dental treatment were found (e.g., Davey, 1989; Jongh De et al., 1995, Liddell, 1990, Locker et al., 1999, Locker et al., 1996 and Milgrom et al., 1995). However, most of these studies have been carried out retrospectively among adult patients, thus based on subjective reports and possibly involving a bias. Studies among child patients have resulted in more inconsistent findings, depending on the method used to assess conditioning (Klingberg et al., 1995a and Klingberg et al., 1995b; Liddell, 1990 and Milgrom et al., 1995; Townend, Dimigen, & Fung, 2000). That is, a relation with oral health and invasive treatment has been reported repeatedly, but conclusions on the relative contribution of factors vary among studies. For example, Milgrom et al. (1995) found oral health to be a highly important predictor, while others suggested that subjective dental experiences such as perceived dentists’ empathy may be more important (Townend et al., 2000). In addition to Rachman’s pathways, research has also provided evidence for an additional role of other factors. That is, temperamental factors such as general fearfulness or shyness have been associated with dental fear (Berge Ten et al., 1999, Klingberg and Broberg, 1998, Klingberg et al., 1995a and Klingberg et al., 1995b; Williams, Murray, Lund, Harkiss, & De Franco, 1985). Weiner and Sheehan (1990) proposed a two-fold classification of dentally fearful subjects into an endogenous and an exogenous group, with the latter having conditioning as its etiological source and the former a generally anxious constitution. A recent study on age of onset of dental anxiety showed that child-onset patients may be more likely to fall into the exogenous etiological category, indicating that for children conditioning may be most important (Locker et al., 1999). This direct conditioning pathway, however, seems complex and is moderated by other mechanisms. That is, according to the latent inhibition theory an association between a conditioned stimulus (CS) and an unconditioned stimulus (UCS) is formed less likely when the CS is presented alone on several occasions before it is paired with the UCS, than when there were no CS-alone trials before conditioning (Davey, 1989 and Lubow, 1973). For the dental situation, this means that a history of positive or neutral dental experiences may serve as a defence against the development of traumatic associations or experiences, and subsequently against the acquisition of high fears or phobias. The aim therefore, of the present study was to examine the role of direct conditioning experiences in the acquisition of dental fear in children, for a large, more representative group of children. For this purpose, not only the role of potentially invasive dental procedures was studied, but also the timing of these experiences in a child’s dental history. In addition, the children’s emotional reactions during dental visits were taken into account to collect information on subjective dental experiences.