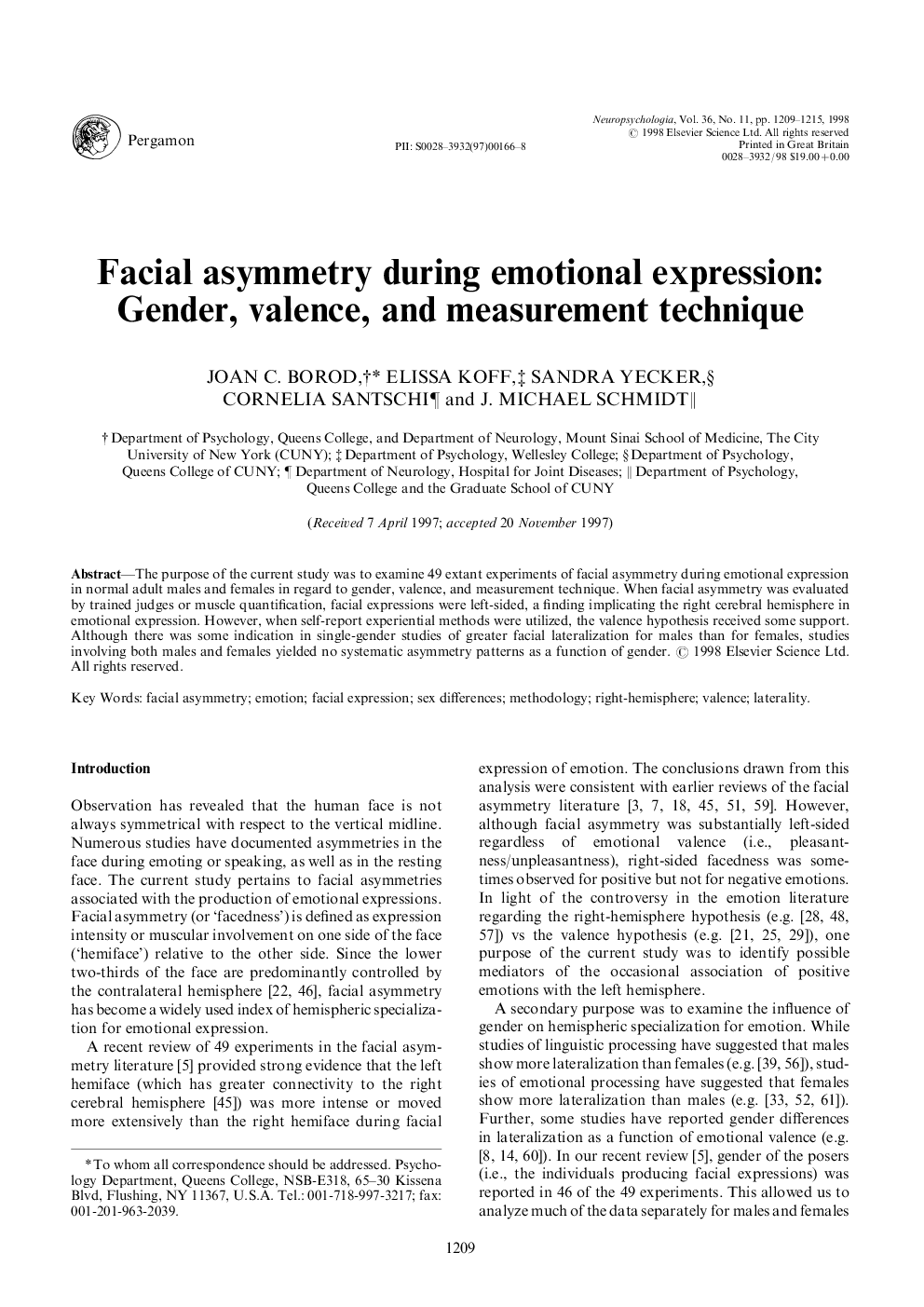 Abstract The purpose of the current study was to examine 49 extant experiments of facial asymmetry during emotional expression in normal adult males and females in regard to gender, valence, and measurement technique. When facial asymmetry was evaluated by trained judges or muscle quantification, facial expressions were left-sided, a finding implicating the right cerebral hemisphere in emotional expression. However, when self-report experiential methods were utilized, the valence hypothesis received some support. Although there was some indication in single-gender studies of greater facial lateralization for males than for females, studies involving both males and females yielded no systematic asymmetry patterns as a function of gender.

. Introduction Observation has revealed that the human face is not always symmetrical with respect to the vertical midline. Numerous studies have documented asymmetries in the face during emoting or speaking, as well as in the resting face. The current study pertains to facial asymmetries associated with the production of emotional expressions. Facial asymmetry (or facedness) is defined as expression intensity or muscular involvement on one side of the face (hemiface) relative to the other side. Since the lower two-thirds of the face are predominantly controlled by the contralateral hemisphere 22 and 46, facial asymmetry has become a widely used index of hemispheric specialization for emotional expression. A recent review of 49 experiments in the facial asymmetry literature [5]provided strong evidence that the left hemiface (which has greater connectivity to the right cerebral hemisphere [45]) was more intense or moved more extensively than the right hemiface during facial expression of emotion. The conclusions drawn from this analysis were consistent with earlier reviews of the facial asymmetry literature 3, 7, 18, 45, 51 and 59. However, although facial asymmetry was substantially left-sided regardless of emotional valence (i.e., pleasantness\unpleasantness), right-sided facedness was sometimes observed for positive but not for negative emotions. In light of the controversy in the emotion literature regarding the right-hemisphere hypothesis (e.g. 28, 48 and 57) vs the valence hypothesis (e.g. 21, 25 and 29), one purpose of the current study was to identify possible mediators of the occasional association of positive emotions with the left hemisphere. A secondary purpose was to examine the influence of gender on hemispheric specialization for emotion. While studies of linguistic processing have suggested that males show more lateralization than females (e.g. 39 and 56), studies of emotional processing have suggested that females show more lateralization than males (e.g. 33, 52 and 61).Further, some studies have reported gender differences in lateralization as a function of emotional valence (e.g. 8, 14 and 60). In our recent review [5], gender of the posers (i.e., the individuals producing facial expressions) was reported in 46 of the 49 experiments. This allowed us to analyze much of the data separately for males and females to ascertain whether any systematic differences in facial asymmetry could be identified. A number of methodological variables are known to mediate emotional expression, including face part (whole vs lower), elicitation condition (posed vs spontaneous), and social display rules. Although these variables did not appear to have overall effects on asymmetry patterns [5],there were indications that factors intrinsic to the way in which facial asymmetry was measured (e.g. whether trained judges or self-report were used) might have shaped some of the results. Thus, our third objective was to analyze the asymmetry data as a function of measurement technique.

3. Results To determine the direction of facial asymmetry in these 82 observations, the data presented by the investigators were examined and categorized as showing overall left-sided, right-sided, or no asymmetry of expression intensity or muscular movement. With the exception of three cases (where trends [P < 0.10] were reported), a finding was categorized as asymmetrical when it was significant at the 0.05 level. Because elicitation condition fn2 and face part did not systematically affect the results in the initial review, these variables were not included in the current paper. 3.1. Gender of poser To determine the effect of the gender of the poser on facial asymmetry, each of the 82 observations was categorized with respect to gender. There were 5 observations where gender was not specified and 23 where only one gender was used. Among the 54 observations that included both genders, 16 did not present results separately for males and females. However, there were 38 observations where data were described or could be analyzed with respect to gender. To begin, we examined those cases using either male (10 observations) or female posers (13 observations). Data for positive and negative emotions were combined because asymmetry distributions did not differ as a function of valence for either gender (Fisher exact probability test). Among male posers, 70% of the observations were left-sided, 20% equal, and 10% right-sided; however, among the female posers, 38% were left-sided, 54% equal, and 8% right-sided. Overall, males showed stronger patterns of lateralization (i.e., left-facedness) than females, though the two distributions did not differ significantly from each other (Fisher exact probability test). In a more direct test of the gender hypothesis, we next examined observations in which both males and females served as posers and the results were reported separately by gender (see Table 2). In these cases, 70% showed no significant gender differences. In 18%, males were more left-faced than females, and in 12%, females were more left-faced than males (Binomial test, P = 0.377). Again, there was no significant relationship among valence, gender, and laterality (Fisher exact probability test). Thus, neither data set provides support for facial asymmetry differences as a function of gender. Table 2. Gender comparisons of facial asymmetry for 33 observations involving both males and females Males and Males are females Females Females Males are more left- do not are more are signi- Emotional significantly faced than differ sig- left-faced ficantly Valence left-faced femalesa nificantly than malesa left-faced Positive 2 2 14 1 2 Negative 0 2 9 0 1 Total 2 4 23 1 3 Ten observations from the original review (involving 38 observations) were collapsed in order to make gender comparisons. a These categories are derived from data based on significant statistical interactions. Table options 3.2. Valence of expression Contrary to what would be expected from the left-sided facedness findings of the original review, there were some instances where posers showed right-sided facedness. This occurred for 7 of the 47 observations involving facial expressions of positive emotion; there were, however, no instances of right-facedness among the 35 observations involving negative emotion. We then examined the data for factors that might account for these right-sided findings. Strikingly, a wide range of measurement techniques was employed. One observation involved trained judges [54], and two observations each involved muscle quantification (e.g. mouth deviation from horizontal line) 11 and 65, electromyography 55 and 58, and self-report (Experiments 1 and 2 [53]). There were fewer instances of judge-based (1 out of 28 observations [3.6%]) than of muscle (2 out of 11 [18%]), electromyography (2 out of 4 [50%]), or self-report (2 out of 4 [50%]) measurements. 3.3. Measurement This range of measurement techniques led us to examine all 82 observations in terms of measurement type. For each measurement type, facedness distributions are displayed in Table 3. Table 3. Number of observations (N = 82) in which a hemiface is more intense or moves more extensively on the left or right side or in which the hemifaces show no asymmetry, as a function of measurement type >Measurement technique Muscle Emotional Trained raters quantification Electomyography Self-report Valence L. = R. L. = R. L. = R. L. = R. Positive 20 7 1 4 5 2 0 2 2 0 2 2 Negative 17 5 0 3 2 0 1 3 0 3 1 0 Total 37 12 1 7 7 2 1 5 2 3 3 2 L. left-facedness; = no differences between right and left hemiface; R. right-facedness. Table options The Binomial test was then used for statistical comparisons of left-sided versus right-sided asymmetries. The data were collapsed across valence, and the equal category was not included. Overall, the left hemiface was more intense or moved more extensively than the right hemiface for rater-based judgments (P < 0.001) and for muscle quantification (P = 0.090). Left\right differences were nonsignificant for electromyography; the most frequent finding here was equal. On self-report measures, interestingly, negative emotions tended to be left-faced and positive emotions to be right-faced.