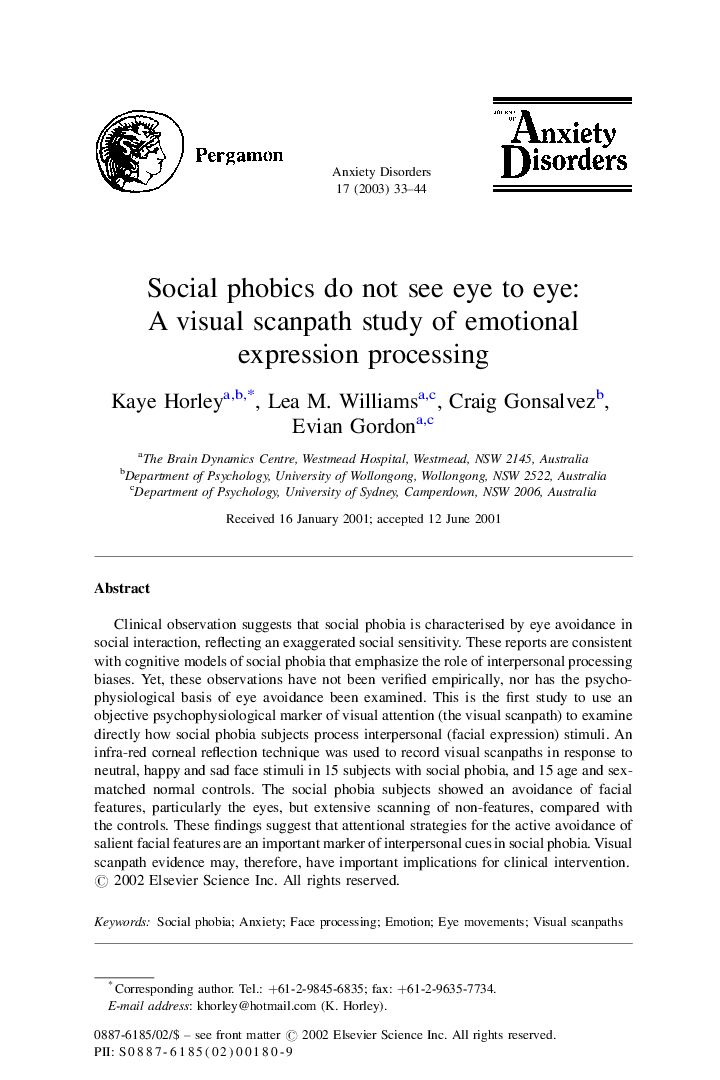 Abstract Clinical observation suggests that social phobia is characterised by eye avoidance in social interaction, reflecting an exaggerated social sensitivity. These reports are consistent with cognitive models of social phobia that emphasize the role of interpersonal processing biases. Yet, these observations have not been verified empirically, nor has the psychophysiological basis of eye avoidance been examined. This is the first study to use an objective psychophysiological marker of visual attention (the visual scanpath) to examine directly how social phobia subjects process interpersonal (facial expression) stimuli. An infra-red corneal reflection technique was used to record visual scanpaths in response to neutral, happy and sad face stimuli in 15 subjects with social phobia, and 15 age and sex-matched normal controls. The social phobia subjects showed an avoidance of facial features, particularly the eyes, but extensive scanning of non-features, compared with the controls. These findings suggest that attentional strategies for the active avoidance of salient facial features are an important marker of interpersonal cues in social phobia. Visual scanpath evidence may, therefore, have important implications for clinical intervention.

. Introduction Social phobia is an anxiety disorder that is characterised by fear of negative evaluation in social situations. One of the most striking observations in clinical studies of social phobia is the avoidance of eye contact in social interactions (Greist, 1995, Marks, 1969 and Ohman, 1986) that may be a consequence of these fears. Since Darwin (1872/1955), psycho-evolutionary research has shown that the eyes are the most fear-inducing feature in situations of social appraisal by others (Öhman, 1986). Cognitive models of anxiety (Beck & Emery, 1985) provide a useful conceptual framework for understanding the likely link between fear of negative evaluation and active avoidance of salient facial features (such as the eyes) in social phobia. These models propose that socially phobic individuals have a selective bias towards processing information that contains a potential threat to oneself, affecting normal attentional strategies and the perception of social stimuli and interactions. Evidence from cognitive paradigms, including dichotic listening and modified Stroop, is consistent with the notion of biases towards potentially threatening interpersonal information in social phobia (for review, see Logan & Goetsch, 1993). Nevertheless, clinical observations of interpersonal dysfunctions in social phobia, and eye contact avoidance in particular, have not been verified empirically, nor has the psychophysiological basis of eye avoidance been examined. This was the first study to use an objective marker of visual attention (the visual scanpath) to examine directly how individuals with social phobia process interpersonal (facial expression) stimuli, compared to healthy subjects. Accurate social perception involves the integration of several basic components, and the ability to perceive emotional expressions in others is a particularly important component. Both the perception and expression of facial affect provides the basis for interpersonal communication. Face and facial emotion processing relies on the integrity of visuomotor and visuospatial information processing systems (Bruce & Young, 1986). It is through these systems that we acquire emotional information, and signal social involvement, empathy, control, dominance and interpersonal adequacy. Argyle (1983, p. 80) has highlighted the “central importance” of eye movements in social interaction, both to receive and to send information. In this study, visual scanpath recording provided information on both eye movement and eye fixation parameters. Visual scanpath studies have shown that healthy subjects produce a regular pattern of eye movement and fixations to face stimuli. Subjects focus in particular on the salient facial features of eyes, nose and mouth, producing scanpaths that represent an inverted triangle in shape (Mertens, Siegmund, & Grüsser, 1993; Walker–Smith, Gale, & Findlay, 1977). Of these features, the greatest attention is usually paid to the eyes, as the most revealing source of information about emotional expression in social interactions (Lundqvist, Esteves, & Öhman, 1999). Visual scanpaths to face stimuli have been investigated only in schizophrenia. Our group (Gordon et al., 1992 and Manor et al., 1999; Williams, Loughland, Gordon, & Davidson, 1999) and others (Ishizuka, Kashiwakurra, & Oija, 1998; Streit, Wolwer, & Gaebel, 1997) have shown that patients with schizophrenia show “restricted” scanpaths to facial stimuli, reflected in few foveal fixations, a longer fixation duration and a reduced scanpath length. Schizophrenia subjects also display a reduced attention (few fixations, shorter fixation duration) to salient facial features (Gordon et al., 1992; Phillips & David, 1997; Williams et al., 1999). The isolated visual scanpath studies of Post-Traumatic Stress Disorder (PTSD) and Generalised Anxiety Disorder (GAD) have examined other threat-relevant stimuli. PTSD subjects have been found to initially fixate on threat words more than controls, reflecting preferential processing of threatening material (Bryant, Harvey, Gordon, & Barry, 1995). In contrast, GAD subjects have not shown aberrant scanpaths in response to ambiguous, potentially threat-related social scenes (Freeman, Garety, & Phillips, 2000). Evidence from both clinical and cognitive studies suggests the scanpaths of individuals with social phobia (as a distinct anxiety disorder) would show a marked avoidance of salient features, particularly the eyes, but not necessarily the more global scanpath differences (e.g., in scanpath length) shown by schizophrenia subjects. We took into account reports that the avoidance of eye gaze also occurs in depression (Shea, Glenn, & Heefner, 1995), autism (Hobson & Lee, 1998), and mental retardation (Elias–Burger, Sigelman, Danley, & Burger, 1981). In this study it was proposed that individuals with social phobia are more likely to avoid the eyes of others because of fear (particularly of negative evaluation) rather than because of a generally flattened affect (depression) or a more fundamental cognitive disorder (autism, mental retardation). Social phobia subjects were, therefore, assessed for depression and screened for mental retardation. We predicted that subjects with social phobia would show significantly less attention (fewer fixations, shorter duration) to eye features compared to healthy controls, but that there would be no between-group differences in other scanpath parameters, such as length of scanpath.