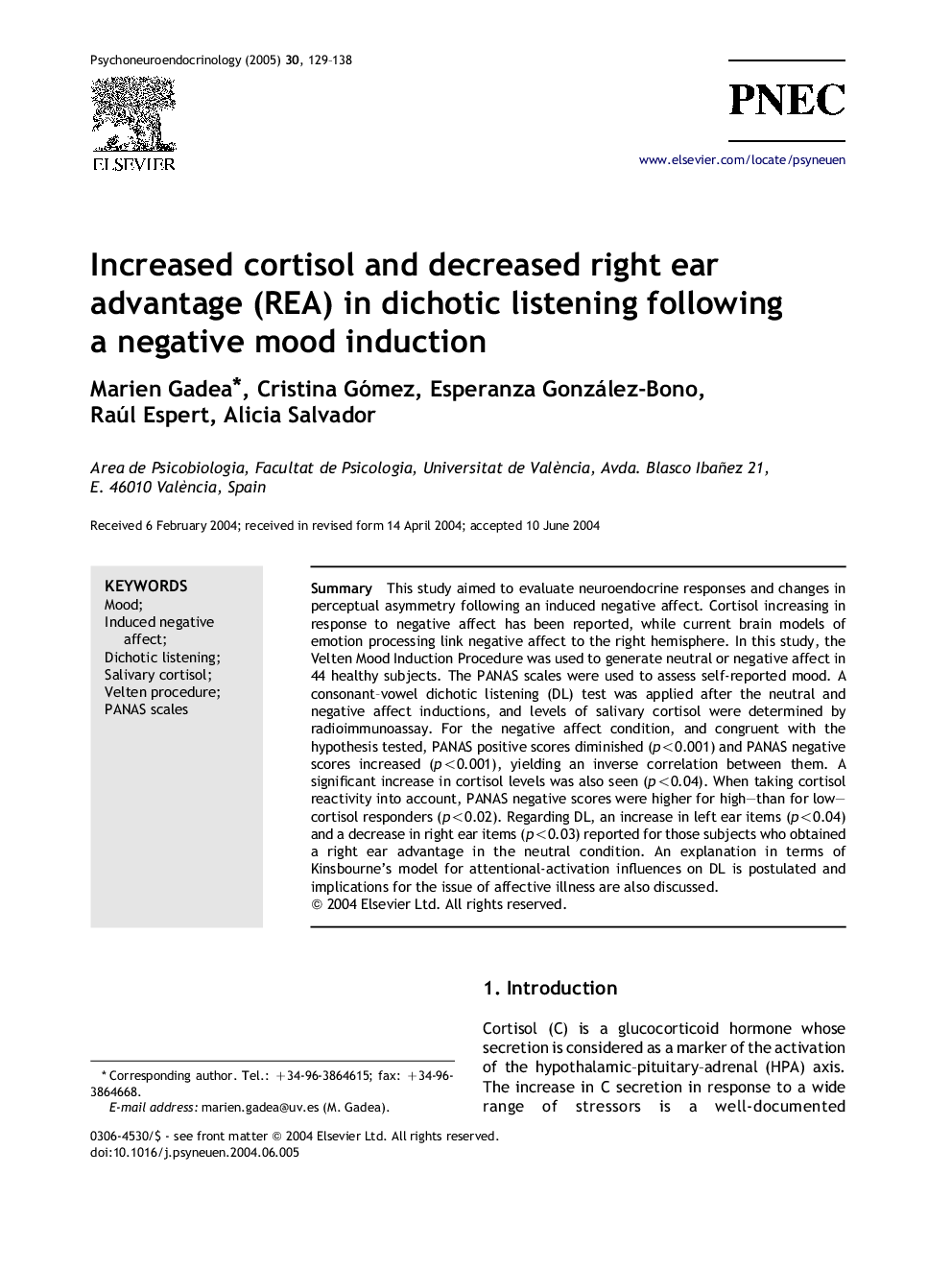 This study aimed to evaluate neuroendocrine responses and changes in perceptual asymmetry following an induced negative affect. Cortisol increasing in response to negative affect has been reported, while current brain models of emotion processing link negative affect to the right hemisphere. In this study, the Velten Mood Induction Procedure was used to generate neutral or negative affect in 44 healthy subjects. The PANAS scales were used to assess self-reported mood. A consonant–vowel dichotic listening (DL) test was applied after the neutral and negative affect inductions, and levels of salivary cortisol were determined by radioimmunoassay. For the negative affect condition, and congruent with the hypothesis tested, PANAS positive scores diminished (p<0.001) and PANAS negative scores increased (p<0.001), yielding an inverse correlation between them. A significant increase in cortisol levels was also seen (p<0.04). When taking cortisol reactivity into account, PANAS negative scores were higher for high—than for low—cortisol responders (p<0.02). Regarding DL, an increase in left ear items (p<0.04) and a decrease in right ear items (p<0.03) reported for those subjects who obtained a right ear advantage in the neutral condition. An explanation in terms of Kinsbourne's model for attentional-activation influences on DL is postulated and implications for the issue of affective illness are also discussed.

Cortisol (C) is a glucocorticoid hormone whose secretion is considered as a marker of the activation of the hypothalamic–pituitary–adrenal (HPA) axis. The increase in C secretion in response to a wide range of stressors is a well-documented phenomenon (for a review see Biondi and Picardi, 1999). Commonly applied laboratory stressors are mental arithmetic (al'Absi et al., 1997), speech tasks (Buchanan et al., 1999), emotional films (Hubert and deJong-Meyer, 1992) or interpersonal rejection paradigms (Stroud et al., 2000). Real-life stressors such as anticipation of stressful events (Smyth et al., 1998, Suay et al., 1999 and Salvador et al., 2003) or everyday work stress (Hanson et al., 2000) have also been used. However, a great variability in the individual C response to these manipulations has frequently been observed and the subjective perception of the situation seems to be crucial for the psychoendocrine pattern found (Biondi and Picardi, 1999). In fact, experiencing a negative affect or a depressed mood has been suggested to play a mediating role in the relationship between stressful events and C secretion (van Eck et al., 1996, Buchanan et al., 1999, Hanson et al., 2000 and Scarpa and Luscher, 2002). In addition, the psychiatric literature often reports an increased activity of the HPA axis in severely depressed patients (Holsboer and Barden, 1996) as well as normalization of the hyperactive HPA system during successful antidepressant pharmacotherapy (Barden et al., 1995). While the connection between increased C and negative affect seems plausible, its linking with cerebral laterality has not been fully explored, although a special role for the right hemisphere (RH) has been suggested. Animal research has demonstrated that rhesus monkeys with extreme right frontal electroencephalographic (EEG) activity show more fear-related behavior, as well as elevated cortisol concentrations (Kalin et al., 1998). More interesting, the association between right frontal EEG asymmetry with higher cortisol levels and fear or sadness behavior has recently been replicated in a sample of 6-month-old infants (Buss et al., 2003). In adult humans, Wittling and Pfluger (1990) showed increases in C when negatively emotional films were projected to the RH (via left visual hemifield) compared with left hemisphere (LH) presentation. The authors concluded that cortical regulation of C secretion in emotion-related situations is under primary control of the RH. On the other hand, current brain models of emotion processing also link negative affect experience to the RH (Mandal et al., 1996). A recent review of functional neuroimaging of depressed patients has related the right dorsolateral prefrontal cortex to the emotion–cognition interactions that mediate negative mood states (Liotti and Mayberg, 2001). EEG studies have shown a reduced left relative to right frontal activation in depressed or dysphoric individuals (Davidson et al., 2002). For right parietal regions, there is evidence of higher activation in depressed patients having a comorbid anxious disorder, but also of reduced activation in patients with a ‘pure’ major depression (Bruder et al., 1997). Regarding induced negative affect (INA), Canli et al. (1998) applied functional MRI and demonstrated an overall RH brain reactivity when normal subjects were viewing emotionally negative pictures. Finally, some studies have explored the cognitive–behavioral outcome of an INA when taking into account the lateralization of the task evaluated. Bartolic et al. (1999) found that dysphoria, generated by means of the Velten Mood Induction Procedure (VMIP) (Velten, 1968) yielded better figural (RH task) than verbal (LH task) fluency outcomes. Van Strien and Morpurgo (1992) demonstrated that the previous presentation of emotionally threatening stimuli enhanced the detection of letters tachistoscopically projected on the left visual field, although this was not replicated in work by Ferry and Nicholls (1997). The above effects could be explained in terms of Kinsbourne's (1970) model of attention and perceptual asymmetry, with the INA increasing RH activation, which in turn facilitated RH tasks and caused an attentional bias to the left hemispace. In this study, the VMIP was used to induce both a neutral and a negative affect in healthy subjects. Other authors have shown that C increases under the negative compared with the neutral conditions of the VMIP (Brown et al., 1993), so we expected a similar result. A consonant–vowel dichotic listening (DL) test was also applied after each condition. In the light of these studies, a facilitation of left ear performance on the DL task following INA was predicted to occur in this study.