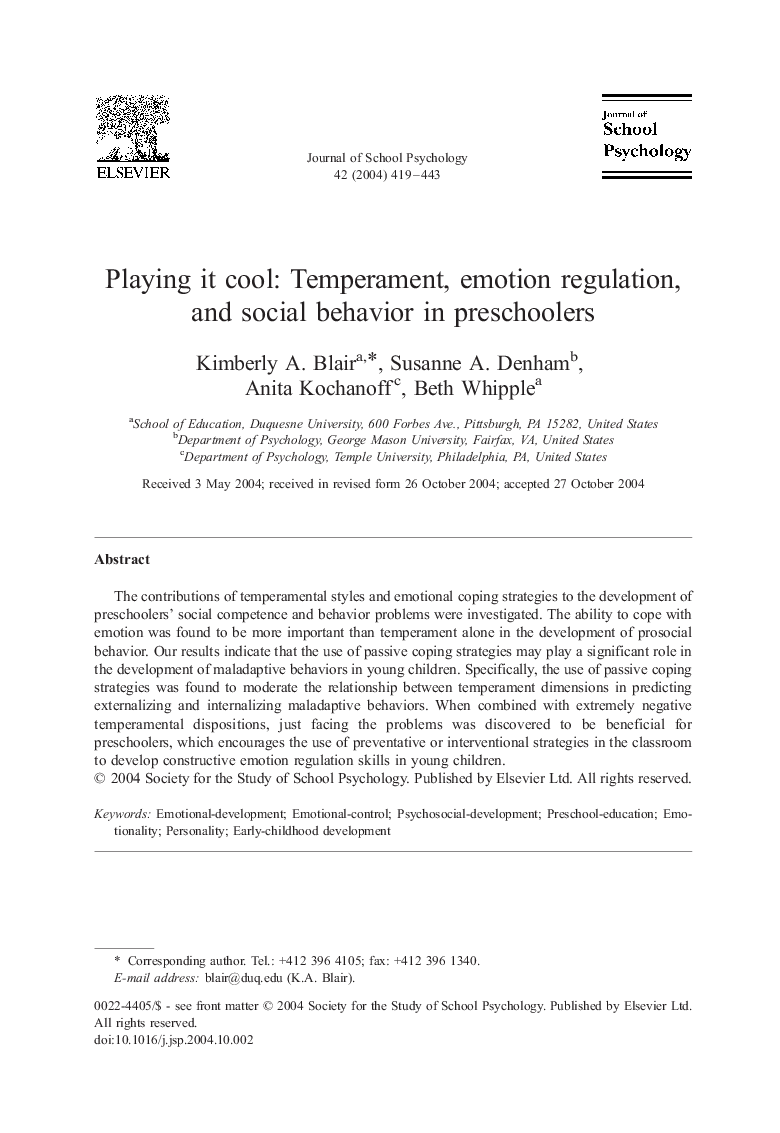 Abstract The contributions of temperamental styles and emotional coping strategies to the development of preschoolers' social competence and behavior problems were investigated. The ability to cope with emotion was found to be more important than temperament alone in the development of prosocial behavior. Our results indicate that the use of passive coping strategies may play a significant role in the development of maladaptive behaviors in young children. Specifically, the use of passive coping strategies was found to moderate the relationship between temperament dimensions in predicting externalizing and internalizing maladaptive behaviors. When combined with extremely negative temperamental dispositions, just facing the problems was discovered to be beneficial for preschoolers, which encourages the use of preventative or interventional strategies in the classroom to develop constructive emotion regulation skills in young children.

Conclusions The study of the intricate relations between aspects of temperament and emotion regulation and their prediction of quality of social functioning over time is in the early stages of exploration. Most of the previous research investigating temperament–emotion regulation associations has focused on predicting social competence and externalizing problems. Our results indicate that the use of passive coping strategies may play a significant role in how temperament influences the development of both externalizing and internalizing behaviors in young children. The results of the present study may be an important step in explaining how different negative emotions, in combination with regulation, may predict problems in social–emotional adjustment. Future research will include lines of study that extend our understanding of temperament and emotion regulation, and the prediction of quality of social functioning while addressing some of the current limitations. It will be important to explore temperament–emotion regulation interactions across more diverse demographic groups, as research indicates socialization practices may differ across racial, cultural, and socioeconomic groups. Upcoming research will also need to continue to define the construct of emotion regulation, how it differs from other constructs of emotional development, and how it can best be measured. Although valuable, most research currently relies on parent and teacher reports of emotional and behavioral processes in children and it will be necessary to identify new ways in which to validly measure emotion regulation. In addition, the study of early emotional development will be most useful when it affords us opportunities for early identification and intervention; longitudinal studies that more conclusively connect early processes to later processes will facilitate our ability to more accurately identify and intervene with those children who are most at risk. Our findings also support the wealth of information available in the current early childhood curricula on how to promote the development of social and emotional competence. For a comprehensive review on the current state of early childhood social and emotional prevention and intervention programming and recommendations for making programming work, see Denham and Burton (2003). By using evidence-based research to inform a team approach to teaching emotion regulation skills that includes both parents and teachers, children can better learn to skillfully navigate social interactions.