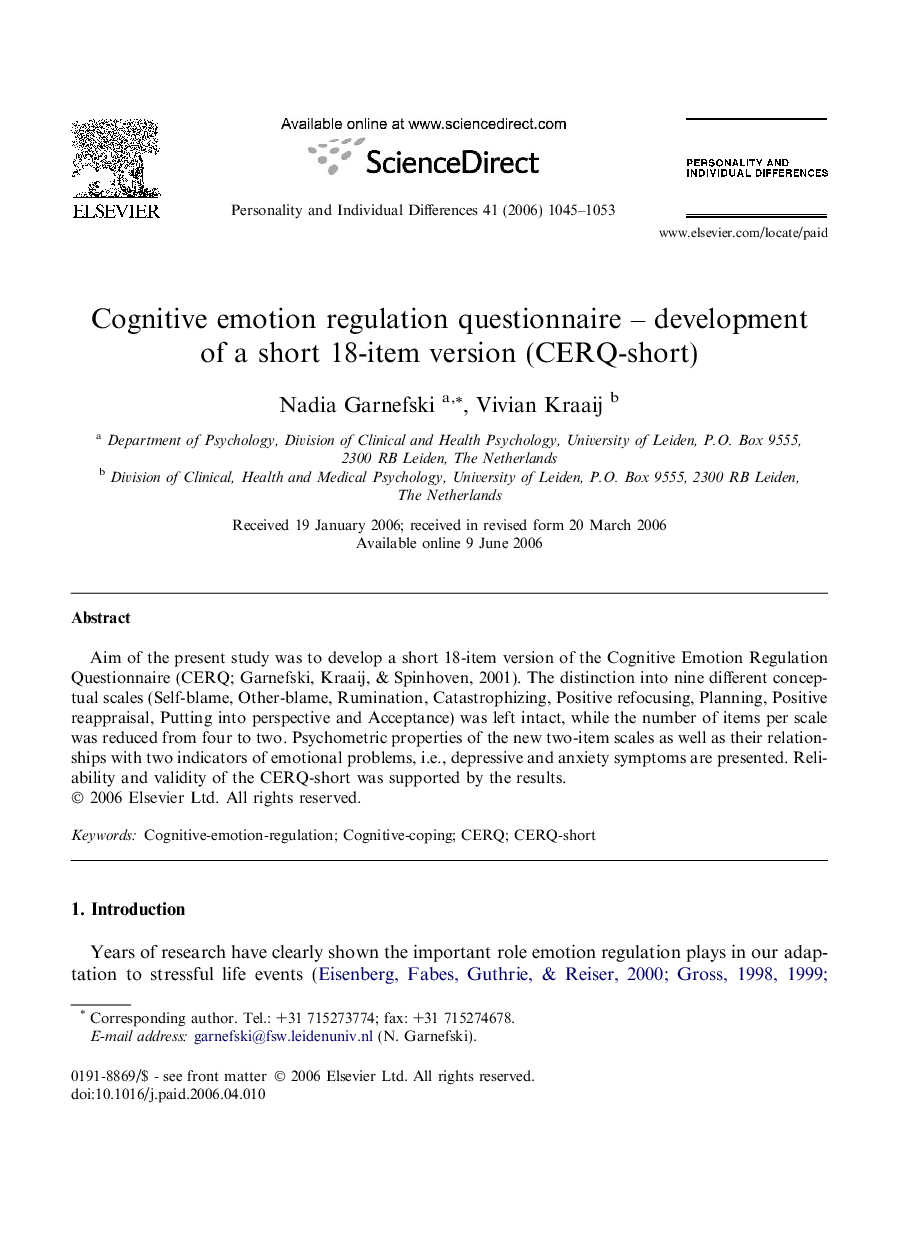 Abstract Aim of the present study was to develop a short 18-item version of the Cognitive Emotion Regulation Questionnaire (CERQ; Garnefski, Kraaij, & Spinhoven, 2001). The distinction into nine different conceptual scales (Self-blame, Other-blame, Rumination, Catastrophizing, Positive refocusing, Planning, Positive reappraisal, Putting into perspective and Acceptance) was left intact, while the number of items per scale was reduced from four to two. Psychometric properties of the new two-item scales as well as their relationships with two indicators of emotional problems, i.e., depressive and anxiety symptoms are presented. Reliability and validity of the CERQ-short was supported by the results.

1. Introduction Years of research have clearly shown the important role emotion regulation plays in our adaptation to stressful life events (Eisenberg et al., 2000, Gross, 1998, Gross, 1999 and Thompson, 1994). Research has shown that a particularly powerful category of emotion regulation involves the cognitive way of handling the intake of emotionally arousing information (e.g., Thompson, 1991, Ochsner and Gross, 2004 and Ochsner and Gross, 2005). Because no instrument had been available to assess a broad set of specific cognitive emotion regulation strategies that people use in response to the experience of threatening or stressful life events, in 1999 the Cognitive Emotion Regulation Questionnaire was developed (CERQ; Garnefski, Kraaij, & Spinhoven, 2001). To date, the CERQ has been included in an increasing number of studies in various countries focusing on relationships between cognitive processes and mental health. Despite some variation across studies, cognitive strategies such as Self-blame, Rumination, Catastrophizing and Positive Reappraisal (inversely) have consistently been associated with negative emotions like depression, anxiety, stress and anger (e.g., D’Acremont and van der Linden, in press, Garnefski et al., 2001, Garnefski et al., 2002a, Garnefski and Kraaij, 2006, Kraaij et al., 2003, Jermann et al., 2006, Kraaij et al., 2003 and Martin and Dahlen, 2005). The CERQ has 36-items in total and consists of nine subscales: Self-blame, referring to thoughts of putting the blame of what you have experienced on yourself; Other-blame, referring to thoughts of putting the blame of what you have experienced on the environment or another person; Rumination, referring to thinking about the feelings and thoughts associated with the negative event; Catastrophizing, referring to thoughts of explicitly emphasizing the terror of what you have experienced; Putting into Perspective, referring to downgrading the importance of the event; Positive Refocusing, referring to thinking about positive experiences instead of thinking about the actual event; Positive Reappraisal, referring to thoughts of giving the event a positive meaning in terms of personal growth; Acceptance, referring to thoughts of resigning yourself to what has happened and Planning, referring to thinking about what steps to take and how to handle the negative event. Lately, the number of requests to develop a short version of the CERQ has grown. Development of a short version is considered important, because of its assumed usefulness as a fast screening instrument in psychiatric patients and easier inclusion in large self-report research batteries where space is scarce. Purpose of the present study therefore was to create a short 18-item version of the Cognitive Emotion Regulation Questionnaire (CERQ-short) by reducing the number of items per scale from four to two. In order to maintain validity, the distinction into nine different conceptual scales was left intact. Psychometric properties of the new two-item scales as well as their relationships with two indicators of emotional problems, i.e., depressive and anxiety symptoms are presented. Results will be compared with the original 36-item version of the CERQ.

4. Conclusion In this study the psychometric properties of the CERQ-short were tested in a large adult general population sample. Whereas the distinction into nine different conceptual scales was left intact, the number of items per scale was reduced from four to two. The results of Principal Component Analyses provided strong empirical support for the allocation of items to the short subscales, while the reliabilities of the scales were found to be acceptably high. They were, however, somewhat lower than for the original 36-item version, but this can be considered as a logical, statistical consequence of the reduction of items per scale. Relationships with outcome measures were comparable to reported results with the original CERQ: Rumination, Self-blame and Catastrophizing were related to more depression and anxiety symptoms, while Positive Reappraisal was related to fewer symptoms, supporting the validity of the CERQ-short. For extensive discussions on the implications for theory and intervention as well as for directions and challenges for future research, we refer to our earlier studies (e.g., Garnefski et al., 2001, Garnefski et al., 2002a and Garnefski and Kraaij, 2006). Some limitations should be mentioned. The only measures included to study external validity were the depression and anxiety scales of the SCL-90. Although these measures have provided initial support for the validity of the CERQ-short, in future relationships with additional measures of depression and anxiety should be studied in order to draw more firm conclusions. In addition, it is important to realize that, generally speaking, overall validity may suffer from reduction of items and that a measure containing a greater number of items might provide more stability. If time and space are available, therefore, the 36-item version should definitely be preferable to the short version. However, the present study has clearly shown that the CERQ-short might be a valuable and reliable tool that can be used in assessment or self-report research, when there is not enough time and space available to include the 36-item version.