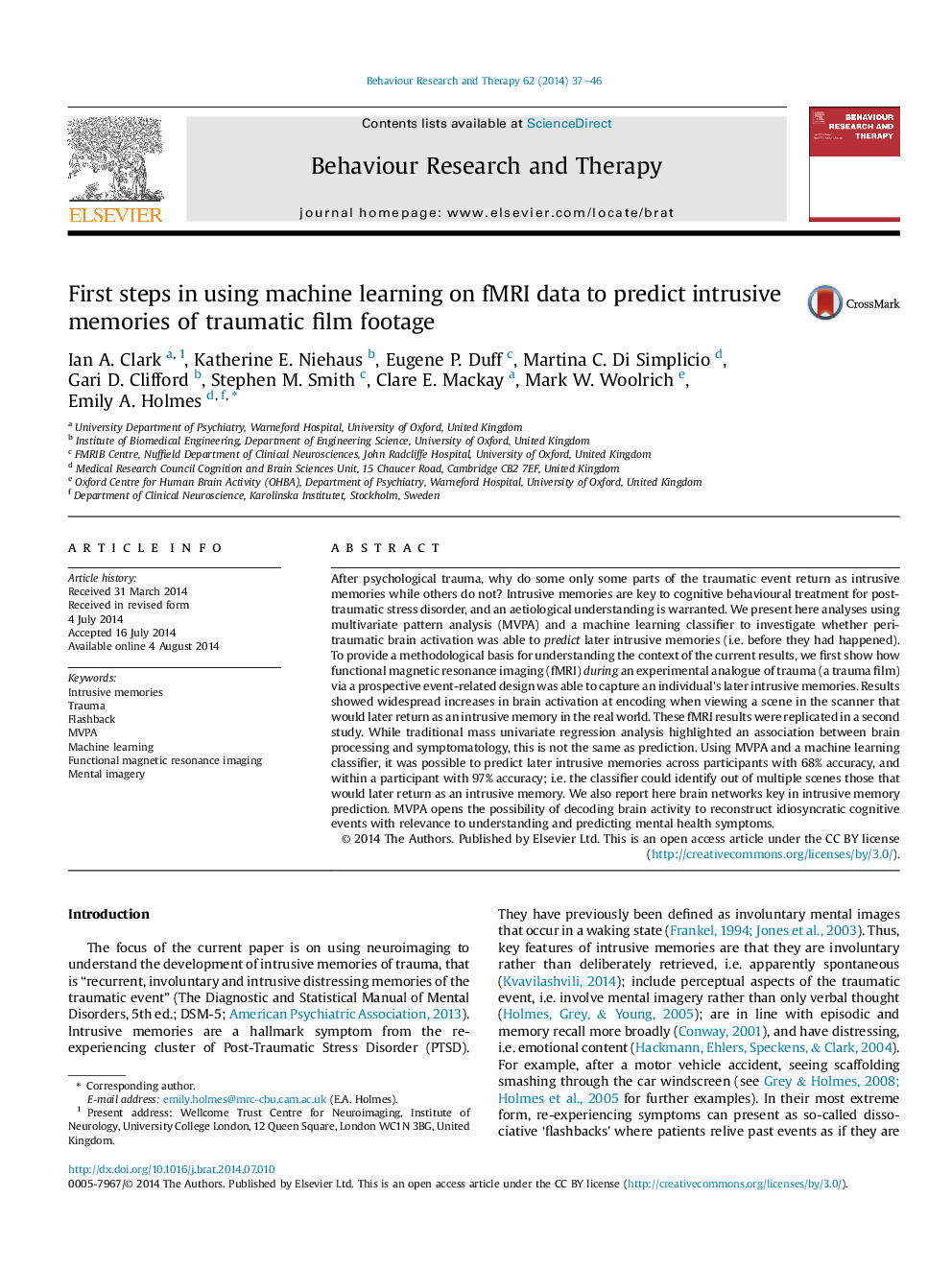 Abstract After psychological trauma, why do some only some parts of the traumatic event return as intrusive memories while others do not? Intrusive memories are key to cognitive behavioural treatment for post-traumatic stress disorder, and an aetiological understanding is warranted. We present here analyses using multivariate pattern analysis (MVPA) and a machine learning classifier to investigate whether peri-traumatic brain activation was able to predict later intrusive memories (i.e. before they had happened). To provide a methodological basis for understanding the context of the current results, we first show how functional magnetic resonance imaging (fMRI) during an experimental analogue of trauma (a trauma film) via a prospective event-related design was able to capture an individual's later intrusive memories. Results showed widespread increases in brain activation at encoding when viewing a scene in the scanner that would later return as an intrusive memory in the real world. These fMRI results were replicated in a second study. While traditional mass univariate regression analysis highlighted an association between brain processing and symptomatology, this is not the same as prediction. Using MVPA and a machine learning classifier, it was possible to predict later intrusive memories across participants with 68% accuracy, and within a participant with 97% accuracy; i.e. the classifier could identify out of multiple scenes those that would later return as an intrusive memory. We also report here brain networks key in intrusive memory prediction. MVPA opens the possibility of decoding brain activity to reconstruct idiosyncratic cognitive events with relevance to understanding and predicting mental health symptoms.

Conclusions Using machine learning and MVPA on fMRI data of trauma film encoding, we have demonstrated that peri-traumatic brain activation is able to predict moments that would later return as an intrusive memory with 68% accuracy across participants and within a given participant with 97% accuracy. Here, we make an attempt to import ideas from basic neuroscience to contribute to an area of mental health – intrusive trauma memories. We suggest certain advance neuroimaging techniques may even be developed for use in studying relatively infrequently occurring and idiosyncratic events in mental health symptomatology (such as intrusive memories) and be used to predict individual's future symptom response.