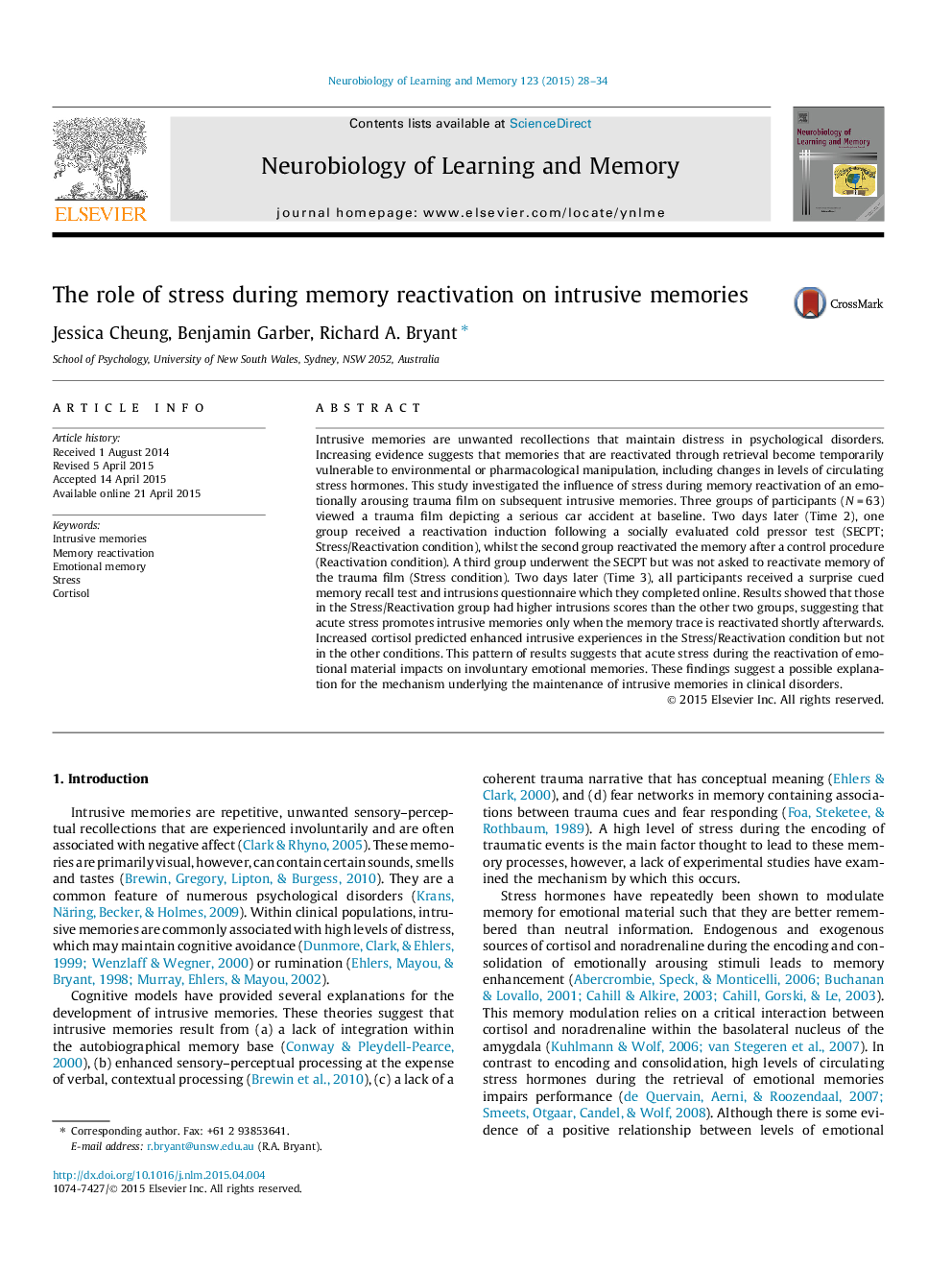 Abstract Intrusive memories are unwanted recollections that maintain distress in psychological disorders. Increasing evidence suggests that memories that are reactivated through retrieval become temporarily vulnerable to environmental or pharmacological manipulation, including changes in levels of circulating stress hormones. This study investigated the influence of stress during memory reactivation of an emotionally arousing trauma film on subsequent intrusive memories. Three groups of participants (N = 63) viewed a trauma film depicting a serious car accident at baseline. Two days later (Time 2), one group received a reactivation induction following a socially evaluated cold pressor test (SECPT; Stress/Reactivation condition), whilst the second group reactivated the memory after a control procedure (Reactivation condition). A third group underwent the SECPT but was not asked to reactivate memory of the trauma film (Stress condition). Two days later (Time 3), all participants received a surprise cued memory recall test and intrusions questionnaire which they completed online. Results showed that those in the Stress/Reactivation group had higher intrusions scores than the other two groups, suggesting that acute stress promotes intrusive memories only when the memory trace is reactivated shortly afterwards. Increased cortisol predicted enhanced intrusive experiences in the Stress/Reactivation condition but not in the other conditions. This pattern of results suggests that acute stress during the reactivation of emotional material impacts on involuntary emotional memories. These findings suggest a possible explanation for the mechanism underlying the maintenance of intrusive memories in clinical disorders.

1. Introduction Intrusive memories are repetitive, unwanted sensory–perceptual recollections that are experienced involuntarily and are often associated with negative affect (Clark & Rhyno, 2005). These memories are primarily visual, however, can contain certain sounds, smells and tastes (Brewin, Gregory, Lipton, & Burgess, 2010). They are a common feature of numerous psychological disorders (Krans, Näring, Becker, & Holmes, 2009). Within clinical populations, intrusive memories are commonly associated with high levels of distress, which may maintain cognitive avoidance (Dunmore et al., 1999 and Wenzlaff and Wegner, 2000) or rumination (Ehlers et al., 1998 and Murray et al., 2002). Cognitive models have provided several explanations for the development of intrusive memories. These theories suggest that intrusive memories result from (a) a lack of integration within the autobiographical memory base (Conway & Pleydell-Pearce, 2000), (b) enhanced sensory–perceptual processing at the expense of verbal, contextual processing (Brewin et al., 2010), (c) a lack of a coherent trauma narrative that has conceptual meaning (Ehlers & Clark, 2000), and (d) fear networks in memory containing associations between trauma cues and fear responding (Foa, Steketee, & Rothbaum, 1989). A high level of stress during the encoding of traumatic events is the main factor thought to lead to these memory processes, however, a lack of experimental studies have examined the mechanism by which this occurs. Stress hormones have repeatedly been shown to modulate memory for emotional material such that they are better remembered than neutral information. Endogenous and exogenous sources of cortisol and noradrenaline during the encoding and consolidation of emotionally arousing stimuli leads to memory enhancement (Abercrombie et al., 2006, Buchanan and Lovallo, 2001, Cahill and Alkire, 2003 and Cahill et al., 2003). This memory modulation relies on a critical interaction between cortisol and noradrenaline within the basolateral nucleus of the amygdala (Kuhlmann and Wolf, 2006 and van Stegeren et al., 2007). In contrast to encoding and consolidation, high levels of circulating stress hormones during the retrieval of emotional memories impairs performance (de Quervain et al., 2007 and Smeets et al., 2008). Although there is some evidence of a positive relationship between levels of emotional memory recall and intrusive recollections (Ferree & Cahill, 2009), there is little study of the role of stress hormones on development of intrusive memories. Consistent with the memory modulation hypothesis, one recent study found that the interactive influence of noradrenergic and glucocorticoid activation predicted intrusive memories (Bryant, McGrath, & Felmingham, 2013). Many studies have now demonstrated that the reactivation of long-term memory reverts it to a labile state that is open to disruption, and requires subsequent consolidation to stabilize it again (Sara, 2000 and Schiller and Phelps, 2011). Some evidence from animal studies suggests that increased glucocorticoids after reactivation can result in poorer memory at test (Maroun and Akirav, 2008 and Wang et al., 2008), although the results are conflicting (Akirav & Maroun, 2013). There are also mixed findings in human studies. In one study memory was impaired for negative (but not neutral) words encoded 5 weeks prior (Tollenaar, Elzinga, Spinhoven, & Everaerd, 2008), and this impairment can endure for one week (Tollenaar, Elzinga, Spinhoven, & Everaerd, 2009); in both these studies, reactivation occurred after the stress manipulation was introduced. In contrast, another study found that decreasing glucocorticoid levels prior to reactivation reduced emotional memory recall in a long-lasting manner (Marin, Hupbach, Maheu, Nader, & Lupien, 2011). Consistent with this finding, another study showed that acute stress enhanced memory for an emotional story only when the memory had first been reactivated (Marin, Pilgrim, & Lupien, 2010). Contrary to the findings of other studies, emotional autobiographical memories have not been influenced by administration of a post-reactivation stressor, however this has been attributed to possible inadequate strength of the stress manipulation (Schwabe & Wolf, 2010). The variations in these findings may be explained, in part, by differences in timing and form of stress manipulation, scheduling of memory testing, and the type of stimuli presented. Despite the attention given to memory reactivation on emotional memory, it has not been studied in relation to intrusive memories. The present study explored the mechanisms maintaining intrusive memories using a memory reactivation paradigm. We used a trauma film paradigm which has been shown to elicit intrusions in nonclinical populations (Holmes & Bourne, 2008). In addition, we administered a stressor in the form of the socially evaluated cold pressor test (SCEPT), which results in elevated higher hypothalamus–pituitary–adrenal (HPA) responsivity (Schwabe, Haddad, & Schachinger, 2008). Participants were randomized to either a Stress/Reactivation, Stress, or Reactivation group. Two days after encoding, the SCEPT was administered prior to memory reactivation. The role of the noradrenergic and glucocorticoid stress response in predicting memory was indexed using saliva sampling at various time points across the experiment. Finally, two days later participants received a surprise cued recall test and measure of intrusive memories. In terms of hypotheses, the current evidence is very mixed concerning the role of acute stress in the context of reactivation on subsequent emotional memories, and no studies have been conducted in relation to intrusive memories. However, on the basis of the evidence that acute stress manipulation does enhance reactivated emotional memories (Marin et al., 2010), we predicted more intrusive emotional memories in participants who received both the stressor and reactivation induction.