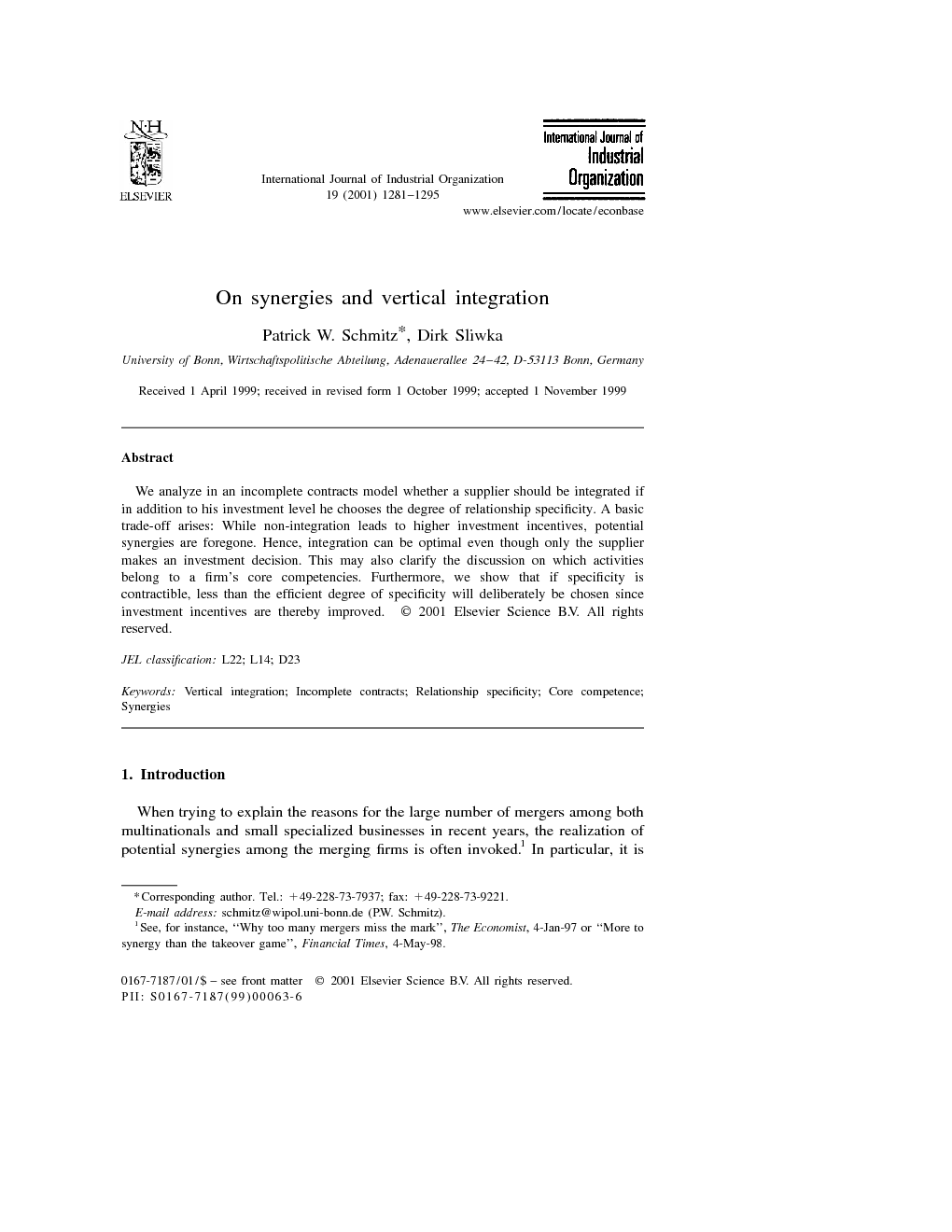 We analyze in an incomplete contracts model whether a supplier should be integrated if in addition to his investment level he chooses the degree of relationship specificity. A basic trade-off arises: While non-integration leads to higher investment incentives, potential synergies are foregone. Hence, integration can be optimal even though only the supplier makes an investment decision. This may also clarify the discussion on which activities belong to a firm’s core competencies. Furthermore, we show that if specificity is contractible, less than the efficient degree of specificity will deliberately be chosen since investment incentives are thereby improved.

The standard GHM incomplete contract model emphasizes the role of asset ownership as a means to induce parties to make appropriate investment decisions. Investment is usually interpreted as unverifiable effort. If only one party has to make an investment decision, this party should be the owner of the asset (non-integration). Here we have argued that if the investing party in addition also decides the degree of specificity, this conclusion may well change. In fact, if the potential of synergies that can be realized by full specificity is sufficiently large, integration may be optimal. It is true that incentives to exert effort may be smaller under integration than under non-integration. But under non-integration the investing party has an incentive not to choose full specificity, because this increases the revenue he could obtain on the spot market. Under integration this detrimental incentive effect does not arise, since without ownership of the asset the investing party cannot threaten to sell on the spot market. On the other hand, if the potential synergies are small, less specificity is not as harmful as underinvestment, so that non-integration is the preferred ownership structure. This trade-off can help to identify activities that belong to the firm’s core competencies. Such activities may be characterized by the fact that the potential synergies foregone with non-integration are large enough to dominate the incentive losses when the supplier is integrated. In the incomplete contracts literature it is usually assumed that initially only asset ownership can be contractually determined. Yet, unlike effort the degree of specificity (e.g. location) may in some instances well be verifiable. In this case non-integration is again the optimal ownership structure. However, it is interesting to note that now the parties deliberately agree on less than full specificity. While full specificity would be optimal in a first-best world, less specificity has the advantage of coming along with higher incentives to exert effort, because effort then also increases the revenue which the investing party could obtain on the spot market.