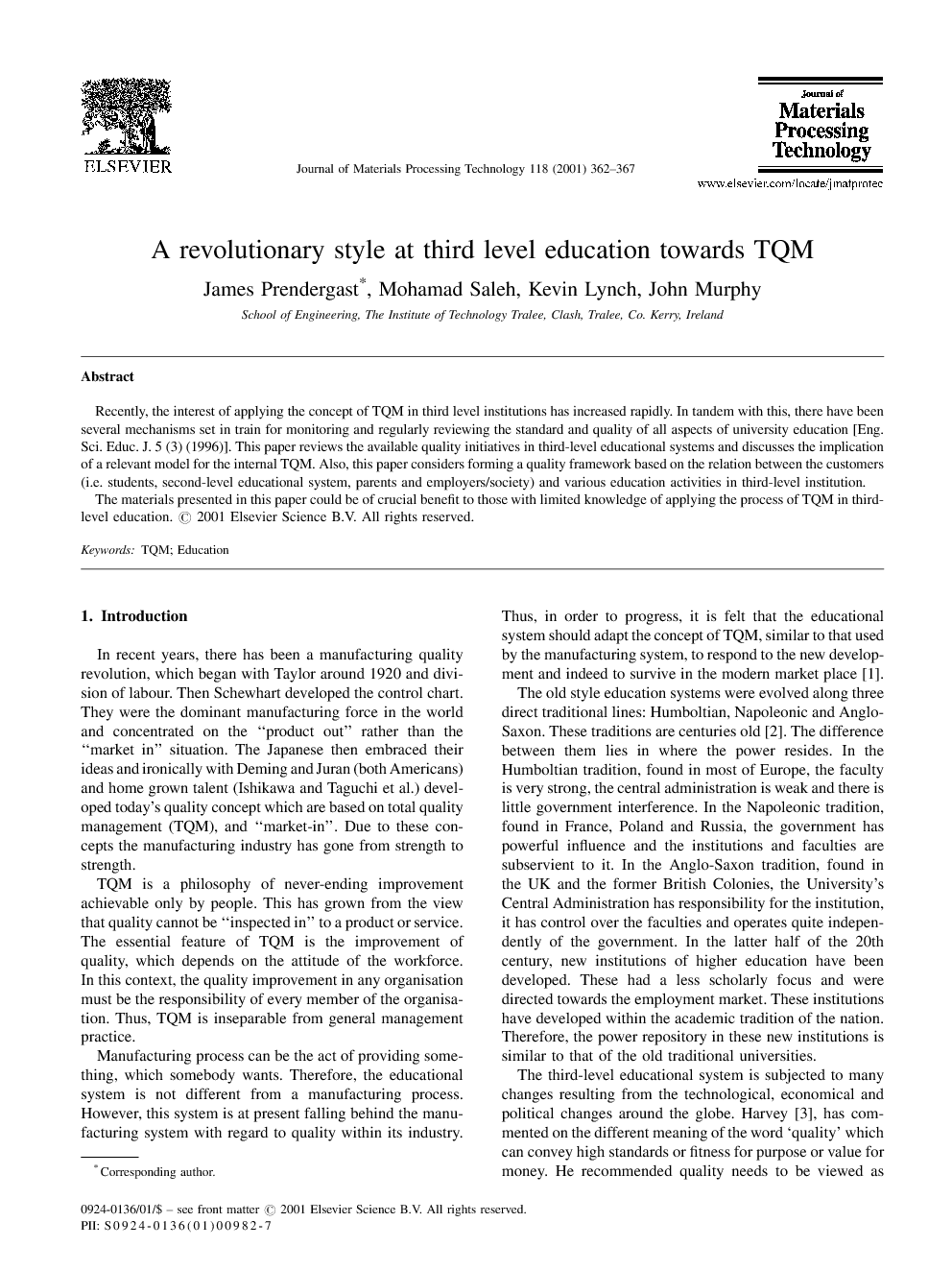 Recently, the interest of applying the concept of TQM in third level institutions has increased rapidly. In tandem with this, there have been several mechanisms set in train for monitoring and regularly reviewing the standard and quality of all aspects of university education [Eng. Sci. Educ. J. 5 (3) (1996)]. This paper reviews the available quality initiatives in third-level educational systems and discusses the implication of a relevant model for the internal TQM. Also, this paper considers forming a quality framework based on the relation between the customers (i.e. students, second-level educational system, parents and employers/society) and various education activities in third-level institution. The materials presented in this paper could be of crucial benefit to those with limited knowledge of applying the process of TQM in third-level education.

In recent years, there has been a manufacturing quality revolution, which began with Taylor around 1920 and division of labour. Then Schewhart developed the control chart. They were the dominant manufacturing force in the world and concentrated on the “product out” rather than the “market in” situation. The Japanese then embraced their ideas and ironically with Deming and Juran (both Americans) and home grown talent (Ishikawa and Taguchi et al.) developed today’s quality concept which are based on total quality management (TQM), and “market-in”. Due to these concepts the manufacturing industry has gone from strength to strength. TQM is a philosophy of never-ending improvement achievable only by people. This has grown from the view that quality cannot be “inspected in” to a product or service. The essential feature of TQM is the improvement of quality, which depends on the attitude of the workforce. In this context, the quality improvement in any organisation must be the responsibility of every member of the organisation. Thus, TQM is inseparable from general management practice. Manufacturing process can be the act of providing something, which somebody wants. Therefore, the educational system is not different from a manufacturing process. However, this system is at present falling behind the manufacturing system with regard to quality within its industry. Thus, in order to progress, it is felt that the educational system should adapt the concept of TQM, similar to that used by the manufacturing system, to respond to the new development and indeed to survive in the modern market place [1]. The old style education systems were evolved along three direct traditional lines: Humboltian, Napoleonic and Anglo-Saxon. These traditions are centuries old [2]. The difference between them lies in where the power resides. In the Humboltian tradition, found in most of Europe, the faculty is very strong, the central administration is weak and there is little government interference. In the Napoleonic tradition, found in France, Poland and Russia, the government has powerful influence and the institutions and faculties are subservient to it. In the Anglo-Saxon tradition, found in the UK and the former British Colonies, the University’s Central Administration has responsibility for the institution, it has control over the faculties and operates quite independently of the government. In the latter half of the 20th century, new institutions of higher education have been developed. These had a less scholarly focus and were directed towards the employment market. These institutions have developed within the academic tradition of the nation. Therefore, the power repository in these new institutions is similar to that of the old traditional universities. The third-level educational system is subjected to many changes resulting from the technological, economical and political changes around the globe. Harvey [3], has commented on the different meaning of the word ‘quality’ which can convey high standards or fitness for purpose or value for money. He recommended quality needs to be viewed as ‘transformative’ rather than a perfection process, i.e. essentially as a transformation of the life-experience of the students, by enhancing or empowering them. Harvey viewed the ultimate quality goal, which should be pursued by higher education as ‘the need to invest in continuous improvement of quality of student experience, through staff development, innovation in teaching and learning, research and scholarship’. He also argued that what was needed was a shift in emphasis from the external scrutiny of quality to the setting up of internal quality mechanisms within each educational institution. Tannock [4], pointed out that ‘engineering and other professional subject disciplines had external scrutiny of syllabus material and course accreditation process’. In USA higher education sector, Marchese [5] noted that ‘the number of individuals devoted to the topic TQM runs well up into the 100, the number of institution trying TQM in particular offices might be near 100, the number of those that have committed to TQM on an institution-wide basis stands at two dozen, of which the number with deeper experience constitutes a mere handful’. In the UK, using a study of total internal customer satisfaction, Chaston [6] has demonstrated that British universities are not yet ready to adopt TQM as a unifying managerial principle and institutional philosophy. This paper discusses an internal quality mechanism as an attempt to implant TQM in third-level educational