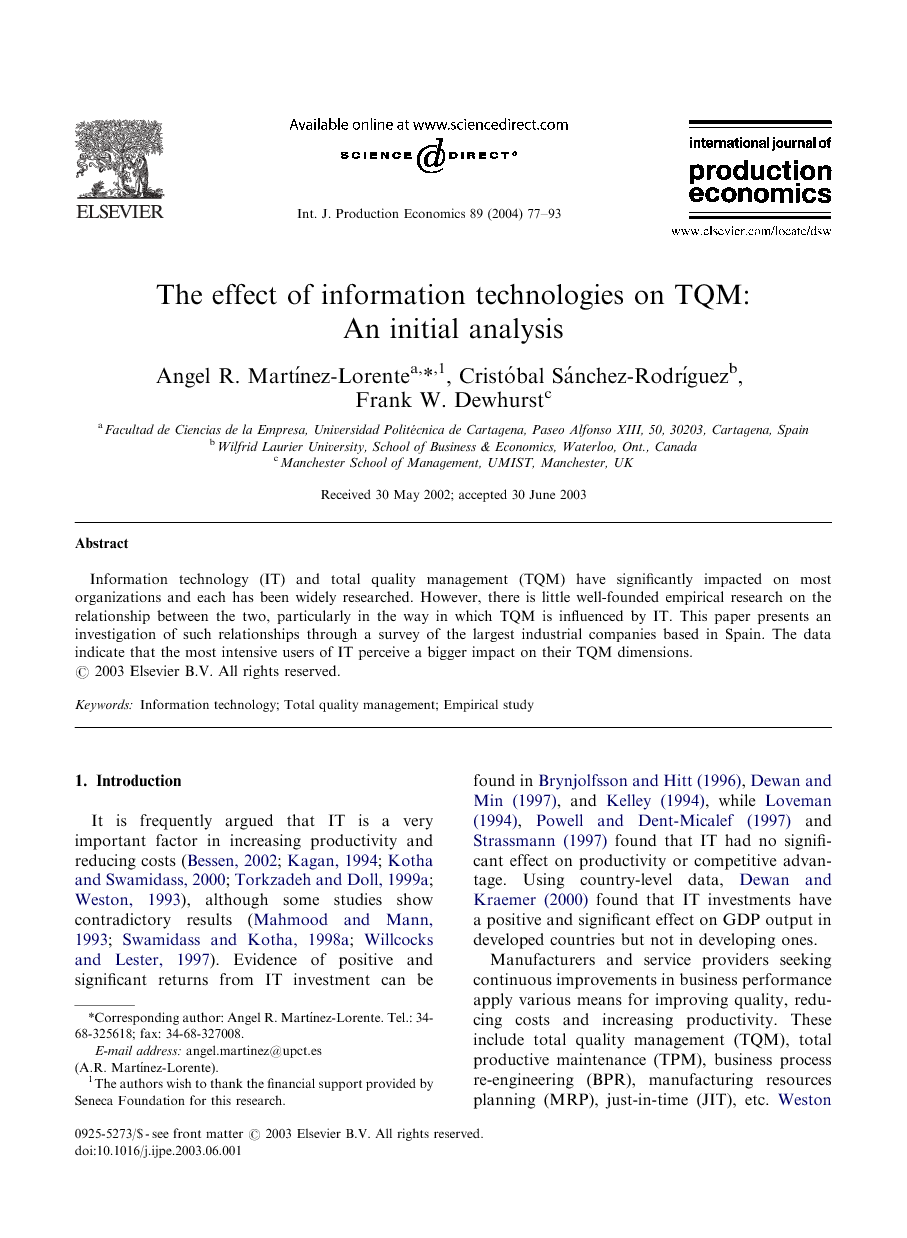 Information technology (IT) and total quality management (TQM) have significantly impacted on most organizations and each has been widely researched. However, there is little well-founded empirical research on the relationship between the two, particularly in the way in which TQM is influenced by IT. This paper presents an investigation of such relationships through a survey of the largest industrial companies based in Spain. The data indicate that the most intensive users of IT perceive a bigger impact on their TQM dimensions.

It is frequently argued that IT is a very important factor in increasing productivity and reducing costs (Bessen, 2002; Kagan, 1994; Kotha and Swamidass, 2000; Torkzadeh and Doll, 1999a; Weston, 1993), although some studies show contradictory results (Mahmood and Mann, 1993; Swamidass and Kotha, 1998a; Willcocks and Lester, 1997). Evidence of positive and significant returns from IT investment can be found in Brynjolfsson and Hitt (1996), Dewan and Min (1997), and Kelley (1994), while Loveman (1994), Powell and Dent-Micalef (1997) and Strassmann (1997) found that IT had no significant effect on productivity or competitive advantage. Using country-level data, Dewan and Kraemer (2000) found that IT investments have a positive and significant effect on GDP output in developed countries but not in developing ones. Manufacturers and service providers seeking continuous improvements in business performance apply various means for improving quality, reducing costs and increasing productivity. These include total quality management (TQM), total productive maintenance (TPM), business process re-engineering (BPR), manufacturing resources planning (MRP), just-in-time (JIT), etc. Weston (1993) claims that all these interventions rely on IT, since they act as a feedback mechanism to users who are keen to measure productivity and, in addition, they also serve as the means to obtain rapid and more accurate information, improve communication links, and facilitate the implementation of advanced tools, systems and modelling techniques. There is little doubt that applications of IT affect all sections and functions of a company, therefore, it is argued that IT also must affect TQM. This paper examines the way in which TQM is influenced by IT and the role of IT in TQM interventions.

The study has a number of limitations that give rise to a number of suggestions for future research. The lack of conclusive results in the analysis of the effects of IT and TQM implementation on company performance could be due to several reasons. One possible reason could be that PST and PE may not be the best “objective” financial measures to use for this purpose, since depreciation policies may vary considerably from company to company. Future research should try to use measures of financial performance that take into consideration this issue such as “value added per employee”. Another reason could be that the operational and quality performance was obtained from subjective opinions of managers, whereas the PST and PE are objective measures obtained from published financial data. Furthermore, optimistic managers might have given more points to every item of the questionnaire whilst pessimistic managers might have given less. However, this explanation would undermine most of the research based on questionnaires. A third reason could be found in the analysis of correlation amongst the variables, which shows that operational and quality performance are not correlated with profitability on sales turnover and that quality performance is not correlated with profit per employee. The explanation could be due to the fact that subjective scales are not affected by the industry factor since managers are asked to respond in relation to their competitors. The industry factor has not been considered for objective measures and this reason could hide the effect of TQM and IT on results. Our study was cross-sectional of a given sample at a given point in time. A more stringent test of the relationships between IT, TQM, impact of IT on TQM, and performance requires a longitudinal study, or field experiment, which could gather information about IT, TQM, impact of IT on TQM, and company performance on an appropriate time span to enable further investigation of the association between the variation of factors and the variation of performance.