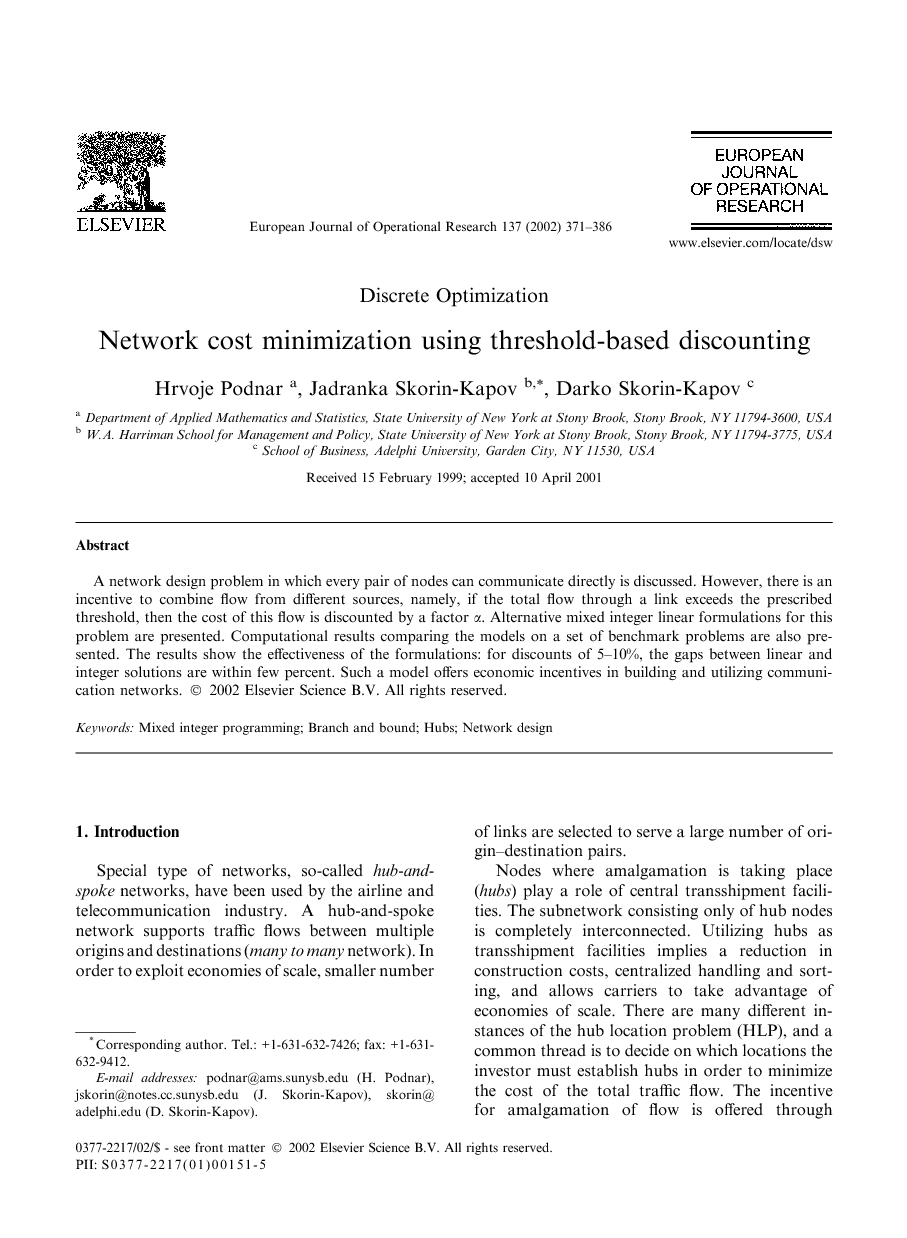 A network design problem in which every pair of nodes can communicate directly is discussed. However, there is an incentive to combine flow from different sources, namely, if the total flow through a link exceeds the prescribed threshold, then the cost of this flow is discounted by a factor α. Alternative mixed integer linear formulations for this problem are presented. Computational results comparing the models on a set of benchmark problems are also presented. The results show the effectiveness of the formulations: for discounts of 5–10%, the gaps between linear and integer solutions are within few percent. Such a model offers economic incentives in building and utilizing communication networks.

In this paper, we presented new alternative mixed integer programming formulations addressing network usage in light of possible discounted flows. Given discounting incentives based on total amount of flow on network links, users are motivated to amalgamate their flow. Three- and four-dimensional mixed integer programming formulations of our model were stated, and some solution strategies were tested on the benchmark CAB data set consisting of instances with n=10, 15, 20 and 25 nodes. The preference was given to branch and bound based techniques. For small n (n=10,15) it was possible to obtain the optimal solutions rather quickly. The strategies that we found attractive were mvs and frv (see Table 2). The frv strategy has a useful property that it aggressively searches for integer solutions. Hence, one can stop the execution of the frv branch and bound procedure if the best current integer solution is satisfactory. For middle-sized problems (n=20), our suggestion is to use the heuristics with fxb strategies (either fxb_mvs or fxb_frv) which almost always generate optimal solutions. For large problems (n=25), the simple rounding heuristic he0 produces satisfactory results in real time. For small discounts of 5–10%, all the proposed heuristics generate feasible integer solutions to the (CAB) data set with the gaps less than 3–4%. The behavior of our model clearly depends on input parameters (α,T). For larger values of α (i.e., for small discounts), the solution can still have a large number of non-discounted links. If the value of α is reduced, the number of discounted links increases followed by the cost reduction. The number of discounted links depends also on the threshold level. For small T the number of discounted links is larger than for larger T values. We believe that our model could be used in cases where a solution to the p-HLP generates discounts to links with insignificant flow. A solution to the p-HLP could force a pair of nodes to use hubs, although a direct link could be more beneficial for the nodes. In this case, the nodes have the incentive to leave the network. Our model could be used in cases where a customer is looking to satisfy his traffic needs using a network of a service provider with the threshold-based discounting. The customer will then amalgamate his flow generating an overall cost reduction for using the network. The model discussed in this paper allows several modifications as follows. For some applications (such as traffic flow, parcel delivery) it would be appropriate to add link capacities ukm. In the original model the role of upper-bounds on the flow were played by fij. The addition of link capacities might make our problem tighter. The new constraint would be defined as View the MathML source Further, a decision maker might find it inappropriate to use the same threshold T for all edges. The threshold could be modified to reflect the specific needs on a certain link. A matrix T=Tkm can be introduced. The new inequality can be then expressed as View the MathML source We anticipate that the models introduced in this paper could well be applied to the modified problem. Another extension of our work could lead to cost allocation problems and cooperative game theory based formulations, namely, by amalgamating flows, the total network cost could be reduced. Having a number of users with different proportions of flow contributing to total flow, and different multi-hop routes from sources to destinations, the challenge would be to allocate network cost in a fair manner, or to devise rules for formulating charges for network usage. A concern should be how to devise a cost structure so that users are encouraged to cooperate in order to bring the overall network costs down. This approach leads to cooperative game theory approach, extensively studied in a number of applications. For results concerning cost allocation in hub networks, see [14]. Since our model generalizes hub models, a future avenue of research will deal with developing cost allocation game theoretic approach to hub-like models.