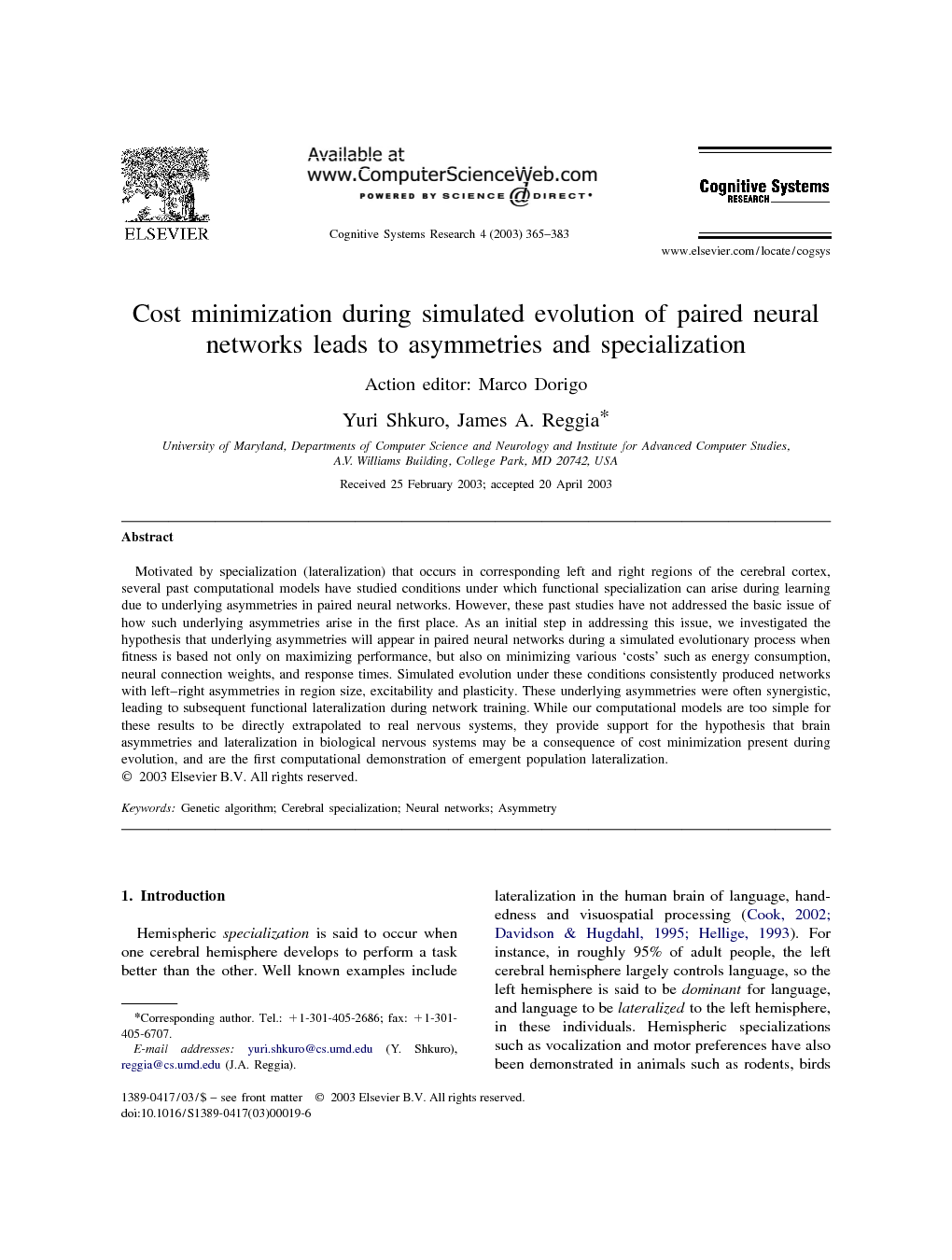 Motivated by specialization (lateralization) that occurs in corresponding left and right regions of the cerebral cortex, several past computational models have studied conditions under which functional specialization can arise during learning due to underlying asymmetries in paired neural networks. However, these past studies have not addressed the basic issue of how such underlying asymmetries arise in the first place. As an initial step in addressing this issue, we investigated the hypothesis that underlying asymmetries will appear in paired neural networks during a simulated evolutionary process when fitness is based not only on maximizing performance, but also on minimizing various ‘costs’ such as energy consumption, neural connection weights, and response times. Simulated evolution under these conditions consistently produced networks with left–right asymmetries in region size, excitability and plasticity. These underlying asymmetries were often synergistic, leading to subsequent functional lateralization during network training. While our computational models are too simple for these results to be directly extrapolated to real nervous systems, they provide support for the hypothesis that brain asymmetries and lateralization in biological nervous systems may be a consequence of cost minimization present during evolution, and are the first computational demonstration of emergent population lateralization

Hemispheric specialization is said to occur when one cerebral hemisphere develops to perform a task better than the other. Well known examples include lateralization in the human brain of language, handedness and visuospatial processing ( Cook, 2002, Davidson and Hugdahl, 1995 and Hellige, 1993). For instance, in roughly 95% of adult people, the left cerebral hemisphere largely controls language, so the left hemisphere is said to be dominant for language, and language to be lateralized to the left hemisphere, in these individuals. Hemispheric specializations such as vocalization and motor preferences have also been demonstrated in animals such as rodents, birds and primates ( Bradshaw and Rogers, 1993, Hellige, 1993 and Rogers and Andrew, 2002). An important distinction in this regard is between individual lateralization, such as occurs in a single person or animal, versus population lateralization, in which lateralization not only occurs in individuals, but also to the same side in the population of individuals under consideration. For example, people exhibit population lateralization to the left hemisphere for language and handedness as noted above, while birds exhibit population lateralization for bird song. In contrast, some species of lobsters develop strong individual ‘handedness’ (one claw develops to be a strong crusher, the other a more diminutive cutter) but there is no population lateralization: roughly 50% of such lobsters are left dominant and 50% right dominant (Govind, 1989). In spite of over a century of experimental investigation, the underlying causes of hemispheric specialization remain poorly understood and controversial. Many underlying asymmetries, involving neuroanatomic, cytoarchitectonic, developmental, biochemical and physiological factors, have been identified in the brain, including left–right cortical differences in size, excitability, and concentrations of important neurotransmitters (for reviews, see Davidson and Hugdahl, 1995 and Hellige, 1993). However, it is currently not clear which of these asymmetries actually are relevant to lateralization. Further, since bilateral symmetry evolved in early nervous systems in association with the appearance of forward locomotion (Lawrenz-Miller, 1977), and since it conveys certain apparent advantages (Provins, 1997), it is unclear what selective advantage would accrue on an evolutionary scale to individuals having superimposed asymmetries (Provins, 1997). Another factor, hemispheric interactions via connecting pathways between left and right hemispheres such as the corpus callosum, may also play a significant although currently unproven role ( Cook, 1986 and Hellige, 1993). Given the above uncertainties, a substantial number of computational models of emergent cerebral specialization and hemispheric interactions have been created over the last 15 years (recently reviewed in (Reggia & Levitan, 2003)). Typically, such neural network models consist of corresponding left and right cerebral regions, often connected to each other via simulated corpus callosum connections, that undergo a learning period involving alterations in synaptic connection strengths (Anninos and Cook, 1988, Cook, 1986, Cook and Beech, 1990, Jacobs and Kosslyn, 1994, Levitan and Reggia, 2000, Reggia et al., 1998, Reggia and Levitan, 2003, Ringo et al., 1994, Shevtsova and Reggia, 1999 and Shkuro et al., 2000). These computational studies have shown, for example, that lateralization to a simulated hemispheric region will occur during learning if that region is larger, learns faster, or is more active, and that inhibitory interhemispheric connections lead to more pronounced lateralization. None of these past neural models, including our own, have used evolutionary computation methods. Conversely, while there have been many studies investigating the evolution of artificial neural networks (e.g. Porto, 1997 and Ruppin, 2002), none of these latter studies has involved the issue of cerebral lateralization. In the research described in this current paper, we extend past computational modeling work by considering a different question: Why might the presence of underlying hemispheric asymmetries be beneficial to the brain from an evolutionary point of view? We work within the framework illustrated in Fig. 1. Unlike the past computational studies of hemispheric specialization described above, which start with an assumed underlying structural/functional asymmetry (i.e. they model solely the right half of Fig. 1), we evolve the parameters in a genetic representation of interacting left and right neural network regions to see if underlying asymmetries will emerge from the evolutionary process, and subsequently during learning/development lead to behavioral specialization (in other words, we model both the evolutionary and the learning processes of Fig. 1). However, we do not directly designate individual neural networks to be fit based on the presence or absence of underlying asymmetries or lateralization. Instead, we specifically examine the hypothesis that adaptive neural networks will evolve to became asymmetrical if they must not only learn to perform well during a developmental period (i.e. learn to minimize their error as they adapt to their environment via synaptic changes), but must also at the same time minimize (a) their energy consumption, (b) their weighted connectivity, or (c) their response time. As we discuss later, energy consumption, weighted connectivity, and response time have previously been suggested to be very important plausible constraints on evolution of organisms in natural environments, motivating their selection for study here. We explore through computational experiments whether these factors, which are not obviously related to neural network asymmetries or specialization a priori, can lead to simulated evolution of asymmetric neural networks that, in turn, lead to lateralization of function during subsequent neural network learning. To our knowledge, this is the first computational study to examine simulated evolution of underlying hemispheric region asymmetries rather than assuming their a priori occurrence1, and the first to examine emergent population lateralization as well as individual lateralization.