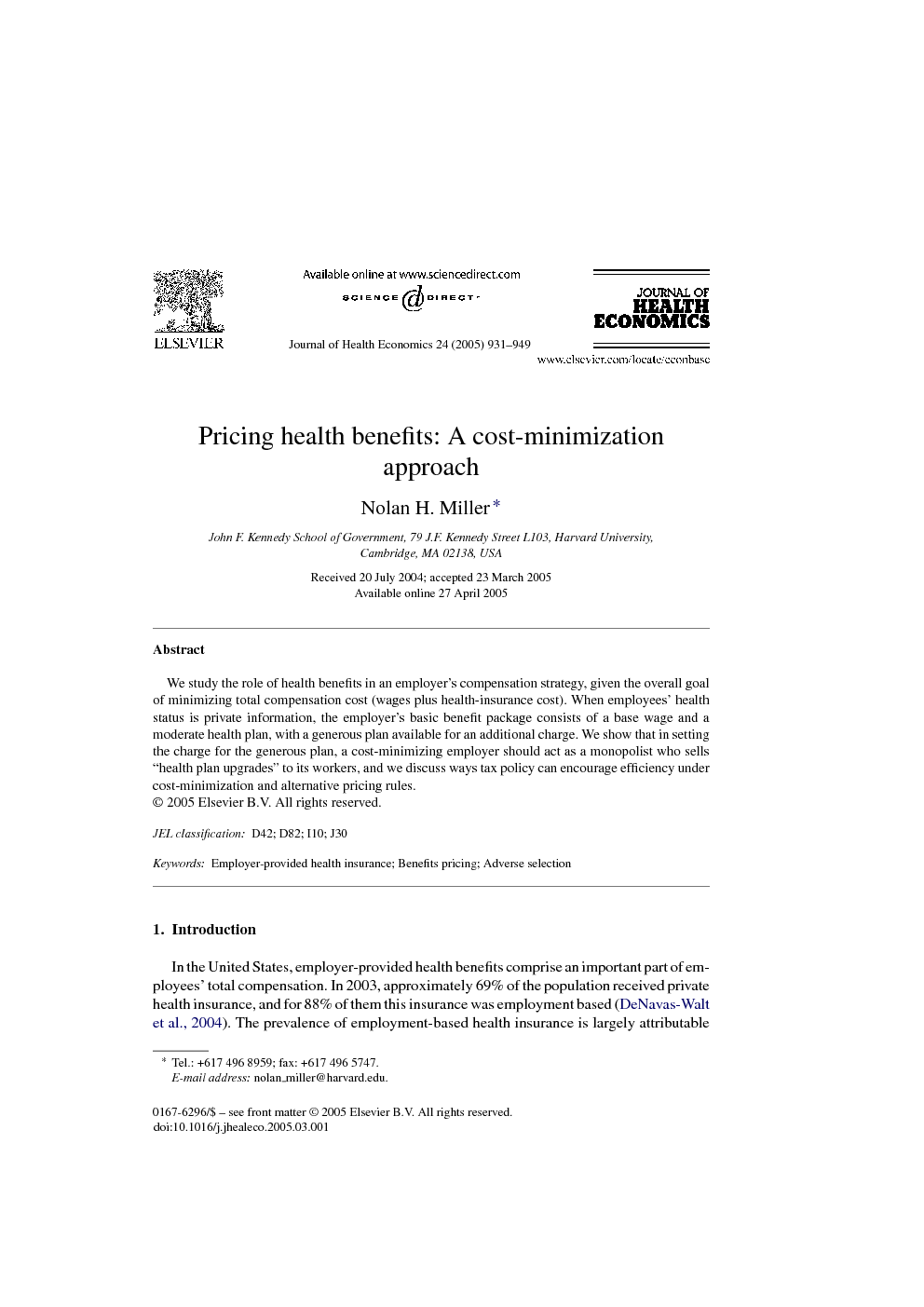 We study the role of health benefits in an employer's compensation strategy, given the overall goal of minimizing total compensation cost (wages plus health-insurance cost). When employees’ health status is private information, the employer's basic benefit package consists of a base wage and a moderate health plan, with a generous plan available for an additional charge. We show that in setting the charge for the generous plan, a cost-minimizing employer should act as a monopolist who sells “health plan upgrades” to its workers, and we discuss ways tax policy can encourage efficiency under cost-minimization and alternative pricing rules

This paper has considered an employer with the goal of minimizing its total compensation cost and has argued that in setting the surcharge for generous coverage, the employer should act as a monopolist who sells health insurance upgrades to its employees. At the most general level, this principle advocates a change in approach to the benefits design problem: employers’ primary focus should be on managing self-selection in order to minimize total compensation cost.27 Such an approach can ameliorate common benefits-related problems employers face. For example, by explicitly considering the cost effects of differing selection, the employer controls it, reducing the likelihood and severity of unintended adverse selection and premium spirals. The theory of firm behavior laid out in this paper provides a basis for thinking about how cost-minimizing employers will react to policy interventions such as changes in the tax code or the structure of insurance markets, and the welfare implications of such interventions. However, while we might expect employer behavior to agree broadly with the model laid out here, it should be noted that a sizeable fraction of employers explicitly adhere to ELS or EPP rules, not cost minimization.28 Those employers who are not minimizing cost may be doing so because they lack the knowledge or ability to do so, or they may be minimizing cost subject to different constraints than those considered in this paper. In either case, it may be difficult to develop robust conclusions about the effects of social policy interventions on employer behavior without a more complete positive model of how employers design their health benefits, and why. For example, while we argued that under either cost-minimization or ELS there is a tax rate that induces socially optimal sorting of workers into plans, the tax rate that does so depends on which rule the employer is using.29 Thus, while there some robust policy conclusions that emerge even in the absence of a clear positive model of employer behavior (e.g., increasing the rate of tax preference increases enrollment in the generous plan), more specific policy conclusions will depend on a more nuanced understanding of what employers are doing and why. This paper has made a number of simplifying assumptions, including assuming that all workers are equally productive, that employee demand for generous coverage depends only on health type, that the size and composition of the employer's workforce is exogenous, and that the employer has all of the bargaining power in the game with employees and insurers. While relaxing any of these assumptions would change the results somewhat, doing so would not affect the fundamental forces that drive the employer's decision. The cost-minimizing employer should merely incorporate these into its cost-minimization problem as constraints. Because they do not posit any objective for the firm, simple rules of thumb such as ELS or EPP will, in general, lead to outcomes that are suboptimal both from a social perspective and from the firm's perspective.