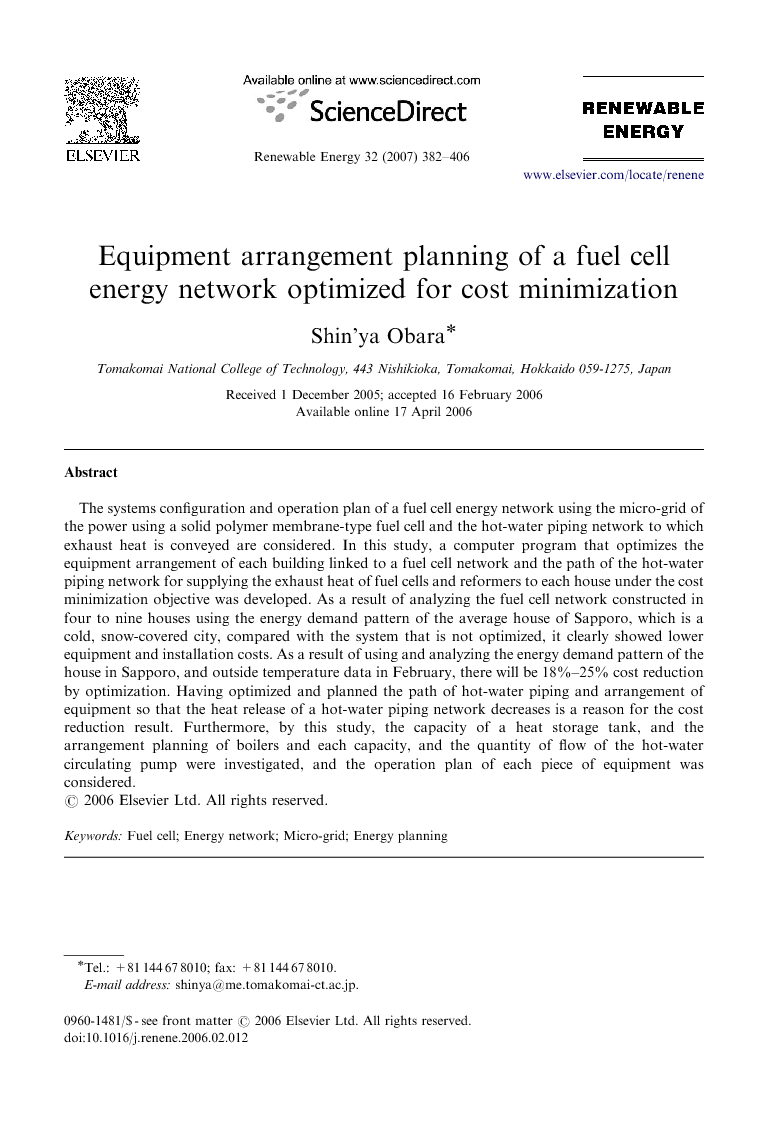 The systems configuration and operation plan of a fuel cell energy network using the micro-grid of the power using a solid polymer membrane-type fuel cell and the hot-water piping network to which exhaust heat is conveyed are considered. In this study, a computer program that optimizes the equipment arrangement of each building linked to a fuel cell network and the path of the hot-water piping network for supplying the exhaust heat of fuel cells and reformers to each house under the cost minimization objective was developed. As a result of analyzing the fuel cell network constructed in four to nine houses using the energy demand pattern of the average house of Sapporo, which is a cold, snow-covered city, compared with the system that is not optimized, it clearly showed lower equipment and installation costs. As a result of using and analyzing the energy demand pattern of the house in Sapporo, and outside temperature data in February, there will be 18%–25% cost reduction by optimization. Having optimized and planned the path of hot-water piping and arrangement of equipment so that the heat release of a hot-water piping network decreases is a reason for the cost reduction result. Furthermore, by this study, the capacity of a heat storage tank, and the arrangement planning of boilers and each capacity, and the quantity of flow of the hot-water circulating pump were investigated, and the operation plan of each piece of equipment was considered.

In recent years, uses by distribution of fuel cells have been studied [1] and [2]. Furthermore, fuel cell systems are connected by a network and the micro-grid of the electrical power operated in cooperation under the objective function given beforehand is investigated [3], [4] and [5]. Moreover, compound utilization of green energy equipment is considered to have little environmental impact although it is unstable, and stable power-generator equipment is investigated by the electrical power grid of small energy equipment [3]. Construction of an electrical power micro-grid may develop to compete with the existing energy infrastructure other than in short-term utilization, such as a backup power supply at the time of disaster. Installation of both a micro-grid of solid polymer membrane-type fuel cells and a hot-water piping network used to supply fuel cell exhaust heats to each building anticipates a large reduction in environmental impact [1] and [2]. In order to realize the energy network of electrical power and heat described above, cooperative control of the distributed energy equipment according to the objective function given beforehand, operation planning, an arrangement design of equipment, and a capacity design of equipment are required. The fuel cell energy network (FEN) investigated in this paper examines the micro-grid (FMG) used for an electric power supply, and the hot-water piping network (HWN) that uses the exhaust heat of equipment for supplying or collecting from each house. In small-scale FEN, since power transmission length is short, the energy loss of electric power transmission is small, and loss of exhaust heat transport can also be maintained at low levels. When loss of electric power transmission is improved rather than heat transport due to the difference in energy unit price, total energy cost is generally low. However, in cold regions, houses, apartment houses, office buildings, hospitals, etc. have great annual heat demand. It is expected that the heat transport loss of FEN in building with high heat demand has a large influence on the efficiency of the system. Therefore, when transporting a lot of heat using HWN, route planning of piping considering the heat release loss of HWN and an arrangement plan of equipment are required; these aspects depend on the route planning of HWN, and the optimum arrangement plan of heat output equipment depends on the energy demand pattern of each building linked to FEN, and the position of each house. The heat-medium (hot-water) temperature that flows through the inside of HWN in a house outlet is decided by the heat supply and demand of each house, and the heat release of HWN is dependent on the hot-water temperature and piping length. So, in this paper, a plan is made so that the equipment arrangement of the fuel cell, reformer, and boiler can be optimized, and an FEN with high energy efficiency and cheap facility cost is planned by optimizing the route of HWN used for supplying the exhaust heat of a fuel cell and a reformer to each house. If the scale of FEN is large, the total length of HWN will increase and heat release will also increase. From this, it is expected that the increase in the scale of FEN will lead to a decline in the energy efficiency of the system. However, compared with FEN that is not optimized, the cost and efficiency of the system may be improved by optimizing the equipment arrangement of each building linked to FEN, and the route of HWN. That is, compared with FEN that is not optimized, it is expected to be the same facility cost as FEN that has an optimized equipment arrangement and a HWN route whose scale (the number of houses linked to FEN) can be extended. In this paper, the arrangement plan of FEN that differs in the number of houses, and the route plan of HWN are conducted using a genetic algorithm [6], [7], [8], [9], [10] and [11]. From this analysis, the operation cost of the system, facility cost, and the installation cost of a facility are investigated, and the cost per house connected by FEN is investigated.