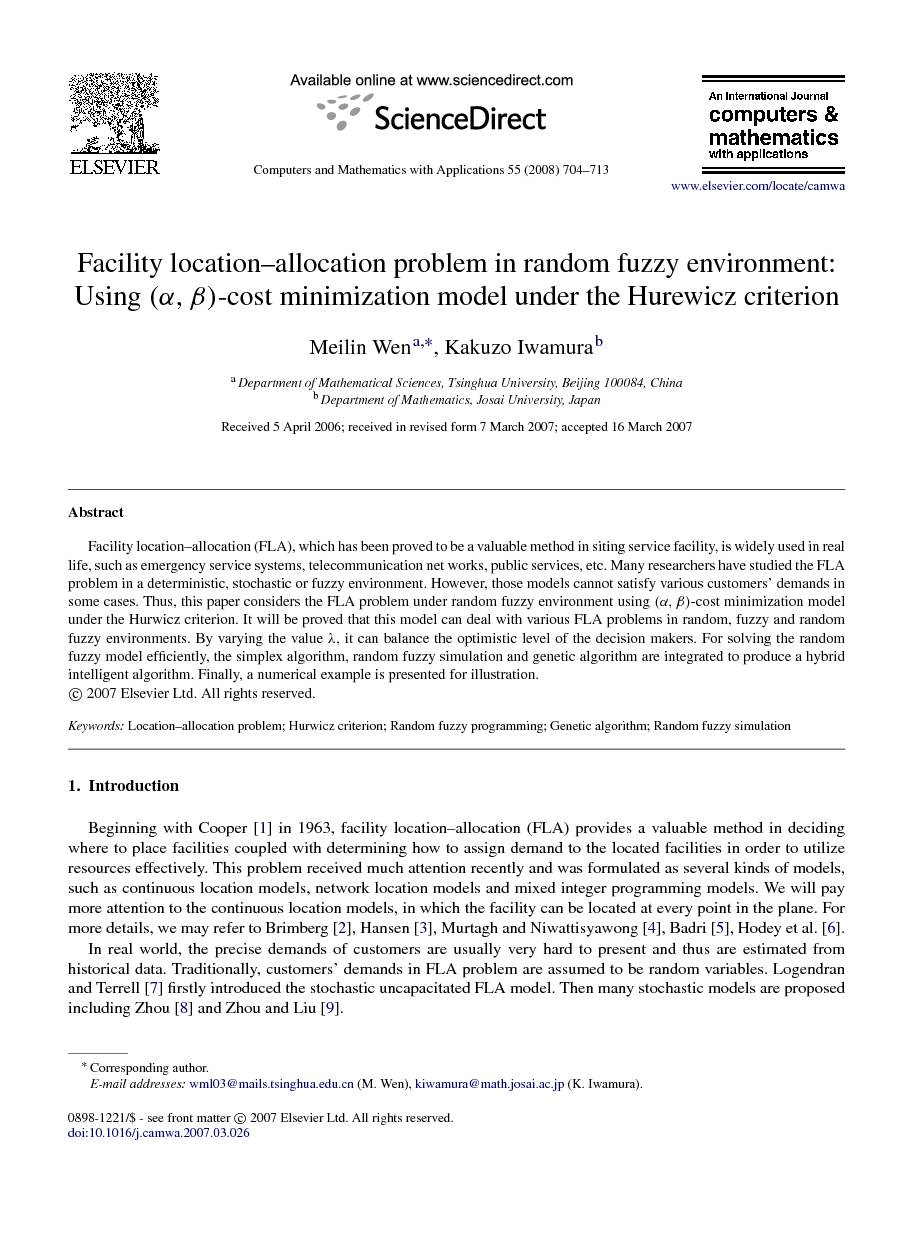 Facility location–allocation (FLA), which has been proved to be a valuable method in siting service facility, is widely used in real life, such as emergency service systems, telecommunication net works, public services, etc. Many researchers have studied the FLA problem in a deterministic, stochastic or fuzzy environment. However, those models cannot satisfy various customers’ demands in some cases. Thus, this paper considers the FLA problem under random fuzzy environment using (α,β)(α,β)-cost minimization model under the Hurwicz criterion. It will be proved that this model can deal with various FLA problems in random, fuzzy and random fuzzy environments. By varying the value λλ, it can balance the optimistic level of the decision makers. For solving the random fuzzy model efficiently, the simplex algorithm, random fuzzy simulation and genetic algorithm are integrated to produce a hybrid intelligent algorithm. Finally, a numerical example is presented for illustration.

Beginning with Cooper [1] in 1963, facility location–allocation (FLA) provides a valuable method in deciding where to place facilities coupled with determining how to assign demand to the located facilities in order to utilize resources effectively. This problem received much attention recently and was formulated as several kinds of models, such as continuous location models, network location models and mixed integer programming models. We will pay more attention to the continuous location models, in which the facility can be located at every point in the plane. For more details, we may refer to Brimberg [2], Hansen [3], Murtagh and Niwattisyawong [4], Badri [5], Hodey et al. [6]. In real world, the precise demands of customers are usually very hard to present and thus are estimated from historical data. Traditionally, customers’ demands in FLA problem are assumed to be random variables. Logendran and Terrell [7] firstly introduced the stochastic uncapacitated FLA model. Then many stochastic models are proposed including Zhou [8] and Zhou and Liu [9]. A new approach to the FLA problem has been developed, in which the customers’ demands are characterized as fuzzy variables. This assumption accords with practice because sometimes the parameters are given imprecisely. In past decades there are many people who have introduced fuzzy theory into FLA problem and various facility location problems by fuzzy logic methods were discussed (Bhattacharya et al. [10]; Chen and Wei [11]; Darzentas [12]). Different from the above-mentioned papers, the capacitated FLA problem with fuzzy demands of customers as the expected cost minimization model, αα-cost minimization model and possibility maximization model were formulated (Zhou and Liu [13]). Sometimes randomness and fuzziness may coexist in FLA problem in practice. For instance, there is a water company who wants to locate some new water stations due to the increase of customers’ demands. New water stations should be located in some new or old regions. The customers in the old regions have been supplying by the water company for a long time and the demands can be summarized by probability distributions. However, the customers in the new regions have never been supplied by the company and thus the demands can be described by fuzzy variables. In real word, many service companies may face such problem when they want to expand their scales. These problems include two kinds of data: the random ones and fuzzy ones. Thus random fuzzy variable can be introduced into FLA problem with mixed uncertainty of randomness and fuzziness. The most familiar criteria to us is the optimistic criterion and pessimistic criterion which are widely used in uncertain environment. Several other criteria are proposed, and a list of properties of rationality and consistency were set forth as a set of axioms to be obeyed by a rational criterion (Milnor [14], Chernoff [15]). The most well-known criterion, the Hurwicz criterion, is suggested by Hurwicz [16] and [17] in 1951, which attempts to find a middle ground between the extremes posed by the optimistic and pessimistic criteria. Instead of assuming total optimism or pessimism, the Hurwicz criterion incorporates a measure of both by assigning a certain percentage weight λλ to optimism and 1−λ1−λ to pessimism, λ∈[0,1]λ∈[0,1]. Many researchers use the optimistic criterion or pessimistic criterion to model the FLA problem, which are both extreme cases. In order to give a balance between these two models, we employ the Hurwicz criterion to model the FLA problem. This paper is organized as follows: in Section 2, the FLA problem and the notations are introduced. We give some basic concepts and conclusions on the random fuzzy variable in Section 3. A new model named random fuzzy (α,β)(α,β)-cost minimization model under the Hurwicz criterion is proposed in Section 4. For solving this random fuzzy model more efficiently, we integrate the simplex algorithm, random fuzzy simulation and genetic algorithm to design a powerful hybrid intelligent algorithm in Section 5. Finally, Section 6 provides a numerical example to illustrate the performance and the effectiveness of the proposed algorithm.

Due to the co-existence of the randomness and fuzziness in real word, we consider the facility location–allocation problem in a random fuzzy environment. This paper contributed to FLA analysis in the following four aspects: (a) In order to overcome the extreme cases of the αα-optimistic model and αα-pessimistic models, the (α,β)(α,β)-cost minimization model under the Hurwicz criterion was proposed. By varying the value λλ, it can balance the optimistic level of the decision makers; (b) We have proved that the (α,β)(α,β)-cost minimization model under the Hurwicz criterion can degenerate to the random and fuzzy cases, which means that the model can deal various FLA problems in random, fuzzy and random fuzzy environments; (c) To solve the model efficiently, we integrated the simplex algorithm, random fuzzy simulations and genetic algorithm to produce a hybrid intelligent algorithm; (d) A numerical example was provided to show the model of random fuzzy capacitated FLA problem and the performance of the hybrid intelligent algorithm. The computational results of the numerical experiments imply that it is effective to solve the (α,β)(α,β)-cost minimization model under the Hurwicz criterion.