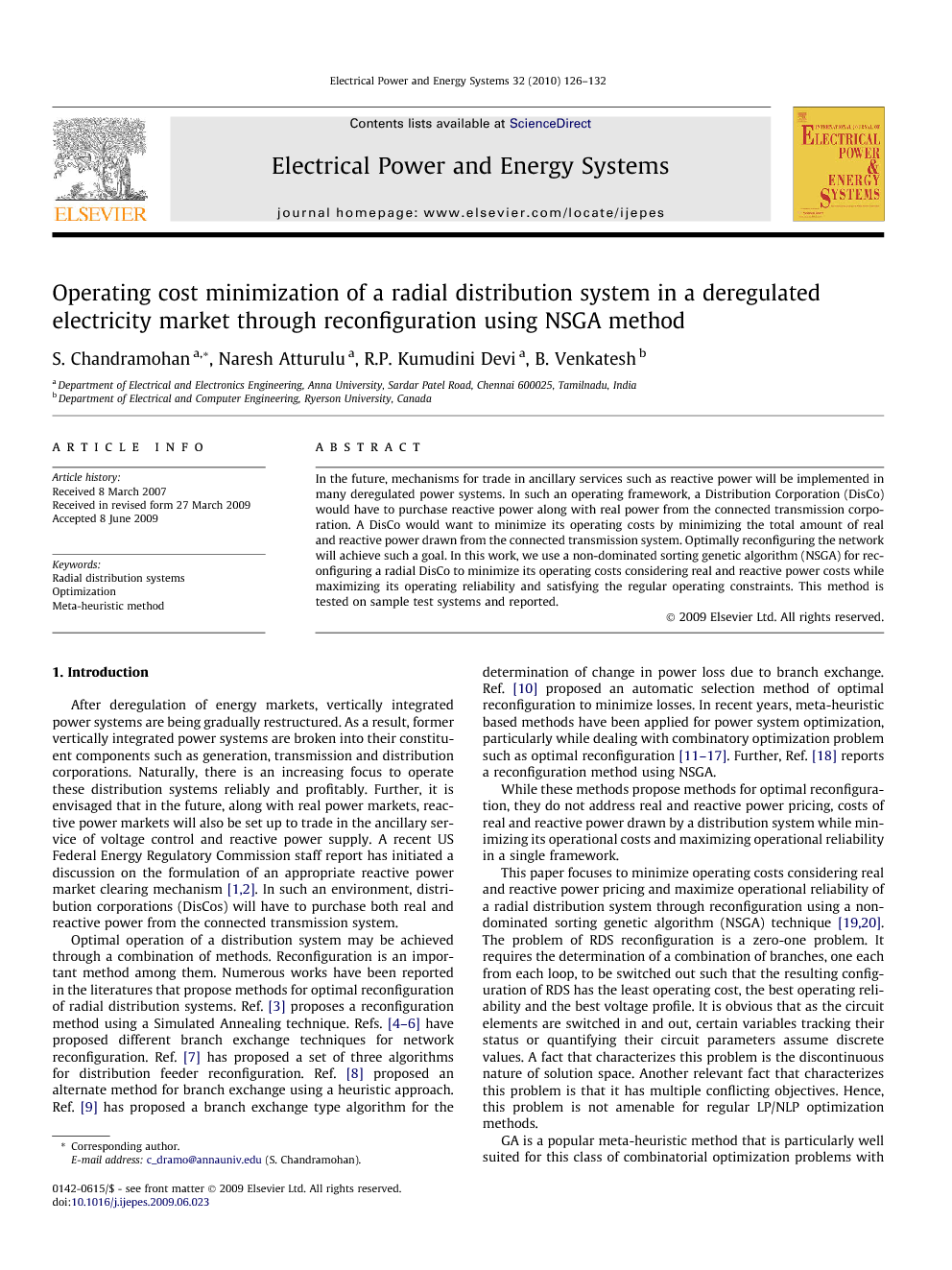 In the future, mechanisms for trade in ancillary services such as reactive power will be implemented in many deregulated power systems. In such an operating framework, a Distribution Corporation (DisCo) would have to purchase reactive power along with real power from the connected transmission corporation. A DisCo would want to minimize its operating costs by minimizing the total amount of real and reactive power drawn from the connected transmission system. Optimally reconfiguring the network will achieve such a goal. In this work, we use a non-dominated sorting genetic algorithm (NSGA) for reconfiguring a radial DisCo to minimize its operating costs considering real and reactive power costs while maximizing its operating reliability and satisfying the regular operating constraints. This method is tested on sample test systems and reported

After deregulation of energy markets, vertically integrated power systems are being gradually restructured. As a result, former vertically integrated power systems are broken into their constituent components such as generation, transmission and distribution corporations. Naturally, there is an increasing focus to operate these distribution systems reliably and profitably. Further, it is envisaged that in the future, along with real power markets, reactive power markets will also be set up to trade in the ancillary service of voltage control and reactive power supply. A recent US Federal Energy Regulatory Commission staff report has initiated a discussion on the formulation of an appropriate reactive power market clearing mechanism [1] and [2]. In such an environment, distribution corporations (DisCos) will have to purchase both real and reactive power from the connected transmission system. Optimal operation of a distribution system may be achieved through a combination of methods. Reconfiguration is an important method among them. Numerous works have been reported in the literatures that propose methods for optimal reconfiguration of radial distribution systems. Ref. [3] proposes a reconfiguration method using a Simulated Annealing technique. Refs. [4], [5] and [6] have proposed different branch exchange techniques for network reconfiguration. Ref. [7] has proposed a set of three algorithms for distribution feeder reconfiguration. Ref. [8] proposed an alternate method for branch exchange using a heuristic approach. Ref. [9] has proposed a branch exchange type algorithm for the determination of change in power loss due to branch exchange. Ref. [10] proposed an automatic selection method of optimal reconfiguration to minimize losses. In recent years, meta-heuristic based methods have been applied for power system optimization, particularly while dealing with combinatory optimization problem such as optimal reconfiguration [11], [12], [13], [14], [15], [16] and [17]. Further, Ref. [18] reports a reconfiguration method using NSGA. While these methods propose methods for optimal reconfiguration, they do not address real and reactive power pricing, costs of real and reactive power drawn by a distribution system while minimizing its operational costs and maximizing operational reliability in a single framework. This paper focuses to minimize operating costs considering real and reactive power pricing and maximize operational reliability of a radial distribution system through reconfiguration using a non-dominated sorting genetic algorithm (NSGA) technique [19] and [20]. The problem of RDS reconfiguration is a zero-one problem. It requires the determination of a combination of branches, one each from each loop, to be switched out such that the resulting configuration of RDS has the least operating cost, the best operating reliability and the best voltage profile. It is obvious that as the circuit elements are switched in and out, certain variables tracking their status or quantifying their circuit parameters assume discrete values. A fact that characterizes this problem is the discontinuous nature of solution space. Another relevant fact that characterizes this problem is that it has multiple conflicting objectives. Hence, this problem is not amenable for regular LP/NLP optimization methods. GA is a popular meta-heuristic method that is particularly well suited for this class of combinatorial optimization problems with discrete/continuous variables and a discontinuous solution space. Traditional GA is customized to accommodate multi-objective optimization problems by using specialized fitness functions, introducing methods to promote solution diversity, and other approaches. There are two general approaches to multi-objective optimization. The first approach is to combine multiple objective functions into a single composite function using a set of weights. However, selection of weights is not well defined and subjective. For this reason, it is better to prefer a set of promising solutions given the multiple objectives. NSGA is one of the pareto techniques that is available in the literature to solve the multi-objective optimization problems [19] and [20]. The second general approach is to determine an entire Pareto optimal solution set or a representative subset. A Pareto optimal set is a set of solutions that are non-dominated with respect to each other. While moving from one Pareto solution to another, there is always a certain amount of sacrifice in one objective to achieve a certain amount of gain in the other. Pareto optimal solution sets are often preferred to single solutions because they can be very useful when considering problems of practical nature. Considering the above, this paper proposes the use of non-dominated sorting genetic algorithm as the solution technique. Section 2 presents a mathematical formulation for the problem of optimal reconfiguration of RDS. The overall algorithm for the optimal reconfiguration of a RDS using NSGA is presented in Section 3. Section 4 presents results of study on 33-bus and 69-bus radial systems. Section 5 presents the conclusions.

This paper presents a method for optimally reconfiguring a distribution in a deregulated market environment with prices for real and reactive power supply. The optimal reconfiguration method uses NSGA as the optimization engine as the problem has both discrete and continuous variable and a discontinuous solution space. The method minimizes operational costs considering real and reactive power drawn by the distribution system from the connected transmission system. The method also maximizes operational reliability by minimizing the total customer interruption costs. It optimizes these objectives while obtaining a satisfactory voltage profile. The algorithm for this method is presented. It is understood that the NSGA can efficiently yield the optimal non-inferior solution for the RDS within a large search space. It also enables a decision maker to choose the most satisfactory solution. Test and results on two standard test systems are reported and discussed. The method is shown to be effective.