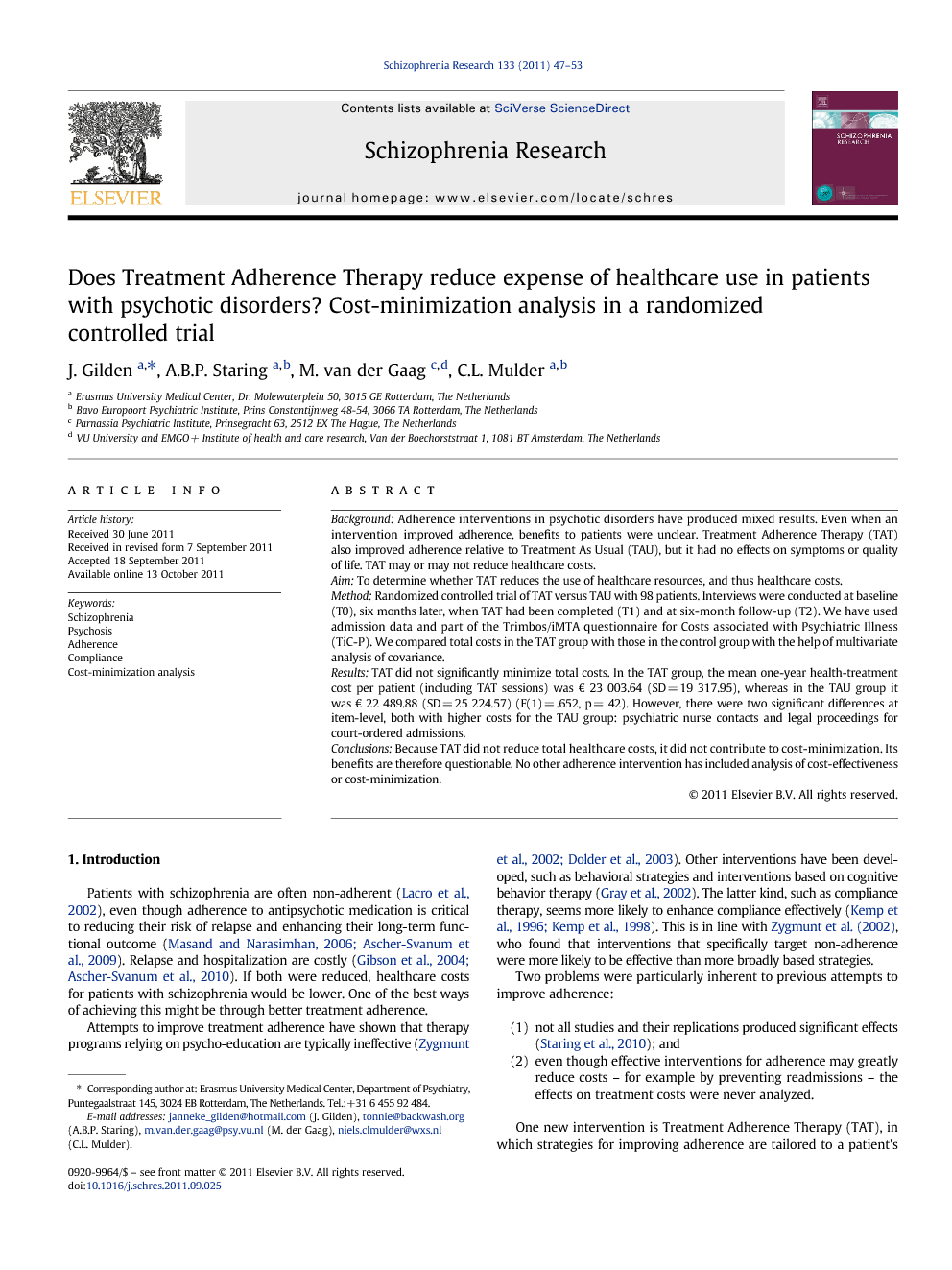 Adherence interventions in psychotic disorders have produced mixed results. Even when an intervention improved adherence, benefits to patients were unclear. Treatment Adherence Therapy (TAT) also improved adherence relative to Treatment As Usual (TAU), but it had no effects on symptoms or quality of life. TAT may or may not reduce healthcare costs.

Patients with schizophrenia are often non-adherent (Lacro et al., 2002), even though adherence to antipsychotic medication is critical to reducing their risk of relapse and enhancing their long-term functional outcome (Masand and Narasimhan, 2006 and Ascher-Svanum et al., 2009). Relapse and hospitalization are costly (Gibson et al., 2004 and Ascher-Svanum et al., 2010). If both were reduced, healthcare costs for patients with schizophrenia would be lower. One of the best ways of achieving this might be through better treatment adherence. Attempts to improve treatment adherence have shown that therapy programs relying on psycho-education are typically ineffective (Zygmunt et al., 2002 and Dolder et al., 2003). Other interventions have been developed, such as behavioral strategies and interventions based on cognitive behavior therapy (Gray et al., 2002). The latter kind, such as compliance therapy, seems more likely to enhance compliance effectively (Kemp et al., 1996 and Kemp et al., 1998). This is in line with Zygmunt et al. (2002), who found that interventions that specifically target non-adherence were more likely to be effective than more broadly based strategies. Two problems were particularly inherent to previous attempts to improve adherence: (1) not all studies and their replications produced significant effects (Staring et al., 2010); and (2) even though effective interventions for adherence may greatly reduce costs – for example by preventing readmissions – the effects on treatment costs were never analyzed. One new intervention is Treatment Adherence Therapy (TAT), in which strategies for improving adherence are tailored to a patient's individual situation (Staring et al., 2006). A rater-blind randomized controlled trial that compared TAT with Treatment As Usual (TAU) found that service engagement (Cohen's d = 0.48) and medication compliance (Cohen's d = 0.43) were improved more successfully by TAT than by TAU. There was also a trend whereby fewer patients were admitted involuntarily (1.9% versus 11.8%, p = 0.053). However, there were no observable effects on symptoms or quality of life (Staring et al., 2010). This raises the question of whether TAT is still useful. Damen et al. (2008) found that with a 15% in compliance with antipsychotics, 0.5 relapses are prevented and patients spend 22 fewer days in hospital over 5 years. In addition, Marcus and Olfson (2008) found that improving adherence with antipsychotics could lower the number of acute care admissions, reduce the number of inpatient treatment, resulting in a savings of approximately $106 million in inpatient care costs. Sun et al. (2007) found the same, poor adherence was consistently associated with higher risk of relapse and rehospitalisation and higher hospitalization costs. So, even though symptoms and quality of life did not improve, TAT may nonetheless reduce the use of healthcare resources by achieving results such as shorter hospital stays. If the concomitant reduction in costs is greater than the cost of TAT itself, the intervention may have a net positive effect on the financial burden to society incurred by non-adherent patients with psychotic disorders. This would make the intervention worthwhile. Besides possible cost benefits for society, prevention of hospital admissions is also desirable for patients. Even though they may not live independently and have to move to sheltered or accompanied housing, this is still better than living in a psychiatric hospital. Patients may live a more stable and independent life in sheltered housing, e.g. more possibilities to meet friends and family, as well as to work or otherwise engage in activities outside of their homes. On the basis of the randomized controlled trial specified above, we therefore assessed whether TAT would help minimize the costs of healthcare use.

4.1. Discussion of the results As total healthcare costs in the TAT group and the control group were about equal, with even a little more costs for patients in TAT, we conclude that TAT, despite effective in improving treatment adherence, did not produce net cost-minimizations relative to TAU. However, some variables had different impacts in both groups, providing interesting data to interpret. Firstly, the costs of outpatient psychiatric treatment for the control group seemed to increase continuously, while for the TAT group it increased only during the intervention period (the first six months) and decreased afterwards. Patients receiving TAT may have needed fewer contacts, possibly because psychiatric nurse contacts were more efficient under TAT, making contacts less necessary afterwards. Fewer crisis situations may have arisen, or patients had become better able to take care of themselves with the help of sheltered housing. Also, during the intervention period, the average length of stay in a psychiatric hospital was almost twice as high in the control group in comparison to the TAT group. Even though this difference was not significant, it may indicate that TAT prevented psychiatric hospital stays during the period of the intervention. If so, TAT may produce stronger results when it gets extended for a longer period. Furthermore, the total costs of legal proceedings for a court-ordered admission to a psychiatric hospital (involuntary admissions) were significantly higher in the control group than in the TAT group. Admissions are extremely costly, especially when they are involuntary. Longer follow-up may show that this factor alone causes TAT to incur a lower overall cost. Indeed, psychiatric hospital stays were the highest cost item for the control group. Nonetheless, this was offset in the TAT group, where the higher number of patients moving to sheltered housing – the fourth distinctive variable – cancelled out any overall differences between the two groups. Even though it produced no difference in costs, more sheltered housing in the TAT condition may have provided patients with the opportunity to improve their quality of life over time. The alternative, living independently, may at times prove too difficult for those with schizophrenia, resulting in a deterioration of living standards and self-care, financial problems, and even homelessness. Although expensive, sheltered or accompanied housing may be the best option for some. The greatest cost item in the control group was length of stay in a psychiatric hospital, a service that is known to be 2.5 times as expensive as sheltered living, and almost four times as expensive as accompanied living. The latter two were the greatest cost items for patients in the TAT group. In the study by Zhu et al. (2008), average annual mental-health treatment costs were significantly higher for persons with psychiatric hospitalization, and no more than 10% of the total cost consisted of day treatment. The study in question included 1557 patients. In addition, a separate study found that home-based care reduces the length of psychiatric hospital stays by at least 80% (Marks et al., 1994). The cost of home-based care in a larger study population is thus generally lower than that of hospitalization, and home-based care also prevents longer hospital stays. We therefore speculate that if our study population had been larger and the follow-up had been longer, hospitalizations in the control group might have been higher and hospital stays might have lasted longer, eventually causing total costs to outstrip those in the TAT group. 4.2. Limitations There are three main limitations in this study. The first is the restricted sample size, making the results susceptible for random findings. Therefore, some random service use differences, especially those of expensive services, may have unevenly contributed to certain differences or a lack thereof in our results. A larger sample may prevent such possible bias. The second limitation is that we collected follow-up data on healthcare use with a recall period of four weeks. If patients had failed to recall service use, or if important services had been used outside the window of the recall period, respondents' medical consumption – and thus costs – might have been underreported. Alternative assessment methods, e.g. reviewing medical records, may possess more accuracy. However, complete medical records were often missing for the patients in our sample, as computerized data on utilization was not available. Also, research has shown that an interview assessment approach to establish healthcare use is sufficiently accurate in comparison to reviewing records (Roberts et al., 1996). The third limitation is the relatively short follow-up. Home-based care, frequent contacts with a psychiatric nurse, and (involuntary) psychiatric hospitalization are expensive. If the follow-up period would have been longer, we could speculate that greater differences between the experimental and control group would emerge. 4.3. Strengths Despite these limitations, this randomized controlled trial has some important strengths. First, both inclusion and the follow-up rates of patients with poor service engagement were relatively high. Second, as far as we know, it was the first adherence-intervention study to consider not just patient outcomes and medical advantages, but also the economic perspective. 4.4. Short summary of the conclusions The total healthcare costs of patients who received TAT were not significantly lower than those of patients who received TAU: these costs were almost equal in both groups. But at item level there were two significant differences. First, during T1–T2, the cost of contacts with a psychiatric nurse was higher in the TAU group than in the TAT group. Second, during T0–T2, the cost of legal proceedings for court-ordered admissions to a psychiatric hospital was higher in the control group than in the TAT group. To determine whether Treatment Adherence Therapy or similar interventions might contribute to cost-minimization, more research and longer follow-up are needed, and, in particular, a larger study population is needed. In the meantime, TAT had no significant effects on symptoms or quality of life, and did not contribute to cost-minimization. At this point there is therefore no hard evidence that it brings important benefits.