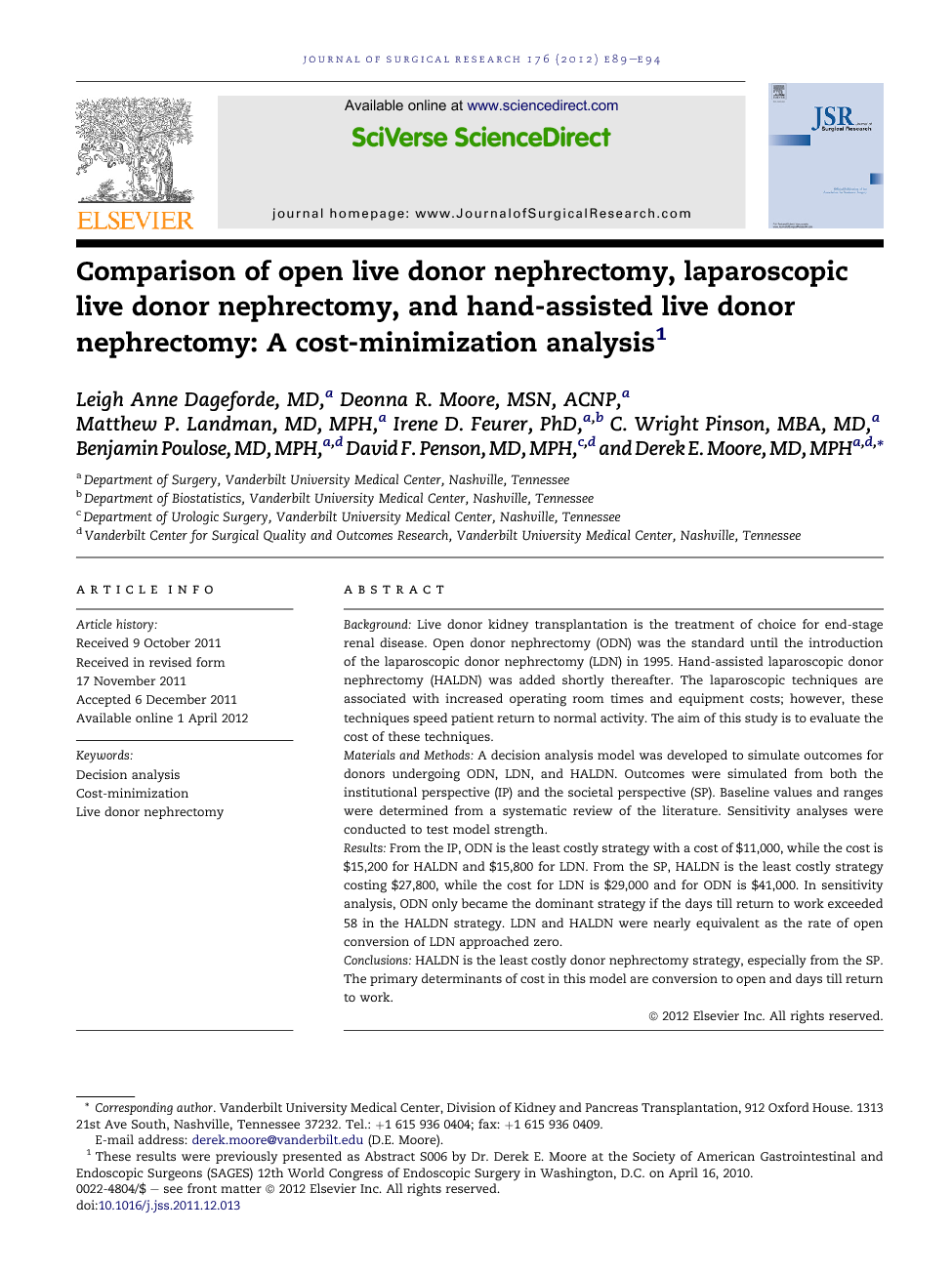 Background Live donor kidney transplantation is the treatment of choice for end-stage renal disease. Open donor nephrectomy (ODN) was the standard until the introduction of the laparoscopic donor nephrectomy (LDN) in 1995. Hand-assisted laparoscopic donor nephrectomy (HALDN) was added shortly thereafter. The laparoscopic techniques are associated with increased operating room times and equipment costs; however, these techniques speed patient return to normal activity. The aim of this study is to evaluate the cost of these techniques. Materials and Methods A decision analysis model was developed to simulate outcomes for donors undergoing ODN, LDN, and HALDN. Outcomes were simulated from both the institutional perspective (IP) and the societal perspective (SP). Baseline values and ranges were determined from a systematic review of the literature. Sensitivity analyses were conducted to test model strength. Results From the IP, ODN is the least costly strategy with a cost of $11,000, while the cost is $15,200 for HALDN and $15,800 for LDN. From the SP, HALDN is the least costly strategy costing $27,800, while the cost for LDN is $29,000 and for ODN is $41,000. In sensitivity analysis, ODN only became the dominant strategy if the days till return to work exceeded 58 in the HALDN strategy. LDN and HALDN were nearly equivalent as the rate of open conversion of LDN approached zero. Conclusions HALDN is the least costly donor nephrectomy strategy, especially from the SP. The primary determinants of cost in this model are conversion to open and days till return to work.

The treatment of choice for end-stage renal disease is kidney transplantation; however, the number of potential recipients far exceeds the number of available donor organs [1]. Living donation is the only means of reliably increasing the donor supply and closing the gap between recipients and available organs. Additionally, kidney transplantation from a live donor provides superior graft survival and outcomes compared with cadaveric donors [2]. For several decades, open donor nephrectomy (ODN) was the only procedure available to those who wished to donate. Most donors are young, healthy adults, and this approach was unattractive because it entailed a painful flank incision often hindering their return to normal activity or work. In 1995, Ratner and colleagues introduced the laparoscopic donor nephrectomy (LDN) [3]. This technique yields less pain, shorter convalescence, and superior quality of life [4], [5], [6], [7] and [8]. In an effort to improve on LDN, hand-assisted laparoscopic donor nephrectomy (HALDN) was introduced and provided better vascular control and ease of retrieval of the kidney. With the introduction of these minimally invasive techniques, the number of live donor candidates increased greatly [9]. The objective of this study was to evaluate the cost-effectiveness of ODN, LDN, and HALDN from the institutional perspective (IP) and the societal perspective (SP) using a decision analysis model. By modeling the outcomes of these three procedures, we can better understand the determinants of the cost-effectiveness of donor nephrectomy.