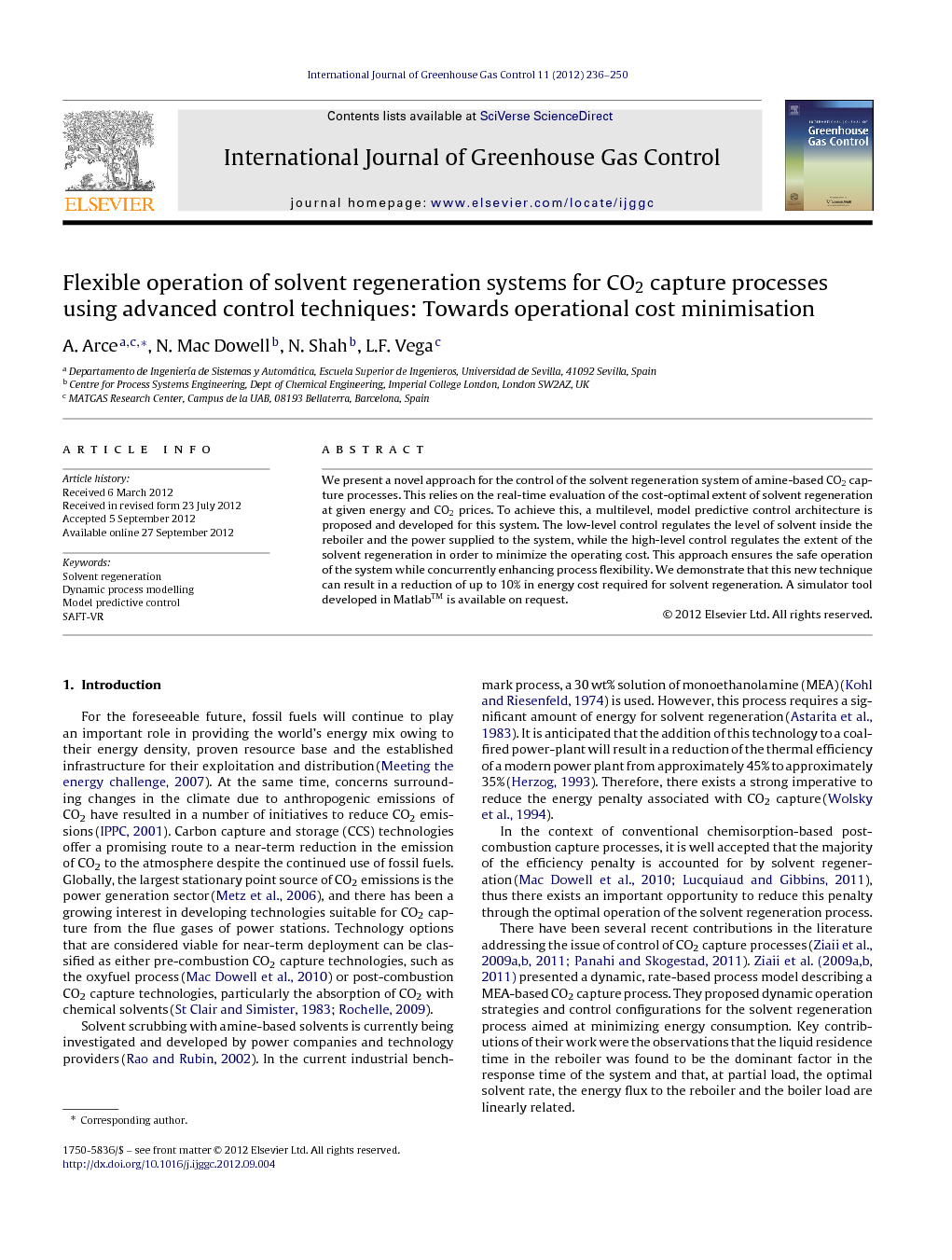 We present a novel approach for the control of the solvent regeneration system of amine-based CO2 capture processes. This relies on the real-time evaluation of the cost-optimal extent of solvent regeneration at given energy and CO2 prices. To achieve this, a multilevel, model predictive control architecture is proposed and developed for this system. The low-level control regulates the level of solvent inside the reboiler and the power supplied to the system, while the high-level control regulates the extent of the solvent regeneration in order to minimize the operating cost. This approach ensures the safe operation of the system while concurrently enhancing process flexibility. We demonstrate that this new technique can result in a reduction of up to 10% in energy cost required for solvent regeneration. A simulator tool developed in Matlab™ is available on request.

For the foreseeable future, fossil fuels will continue to play an important role in providing the world's energy mix owing to their energy density, proven resource base and the established infrastructure for their exploitation and distribution (Meeting the energy challenge, 2007). At the same time, concerns surrounding changes in the climate due to anthropogenic emissions of CO2 have resulted in a number of initiatives to reduce CO2 emissions (IPPC, 2001). Carbon capture and storage (CCS) technologies offer a promising route to a near-term reduction in the emission of CO2 to the atmosphere despite the continued use of fossil fuels. Globally, the largest stationary point source of CO2 emissions is the power generation sector (Metz et al., 2006), and there has been a growing interest in developing technologies suitable for CO2 capture from the flue gases of power stations. Technology options that are considered viable for near-term deployment can be classified as either pre-combustion CO2 capture technologies, such as the oxyfuel process (Mac Dowell et al., 2010) or post-combustion CO2 capture technologies, particularly the absorption of CO2 with chemical solvents (St Clair and Simister, 1983 and Rochelle, 2009). Solvent scrubbing with amine-based solvents is currently being investigated and developed by power companies and technology providers (Rao and Rubin, 2002). In the current industrial benchmark process, a 30 wt% solution of monoethanolamine (MEA) (Kohl and Riesenfeld, 1974) is used. However, this process requires a significant amount of energy for solvent regeneration (Astarita et al., 1983). It is anticipated that the addition of this technology to a coal-fired power-plant will result in a reduction of the thermal efficiency of a modern power plant from approximately 45% to approximately 35% (Herzog, 1993). Therefore, there exists a strong imperative to reduce the energy penalty associated with CO2 capture (Wolsky et al., 1994). In the context of conventional chemisorption-based post-combustion capture processes, it is well accepted that the majority of the efficiency penalty is accounted for by solvent regeneration (Mac Dowell et al., 2010 and Lucquiaud and Gibbins, 2011), thus there exists an important opportunity to reduce this penalty through the optimal operation of the solvent regeneration process. There have been several recent contributions in the literature addressing the issue of control of CO2 capture processes (Ziaii et al., 2009a, Ziaii et al., 2009b, Ziaii et al., 2011 and Panahi and Skogestad, 2011). Ziaii et al., 2009a, Ziaii et al., 2009b and Ziaii et al., 2011 presented a dynamic, rate-based process model describing a MEA-based CO2 capture process. They proposed dynamic operation strategies and control configurations for the solvent regeneration process aimed at minimizing energy consumption. Key contributions of their work were the observations that the liquid residence time in the reboiler was found to be the dominant factor in the response time of the system and that, at partial load, the optimal solvent rate, the energy flux to the reboiler and the boiler load are linearly related. Recently, Panahi and Skogestad (2011) presented a detailed study of the control of a CO2 capture process. Again, the aim of their work was to minimize the energy consumption in the solvent regeneration stage of the process. Their main focus was the identification of the best control variables to use. They identified three different operating regions for the process based on the inlet flue gas flow rate. They observed that the number of unconstrained degrees of freedom changes with the operating region or inlet flue gas flowrate. Regarding control technology, since the 1990s model predictive control (MPC) has been successfully applied to a wide variety of industrial processes (Camacho and Bordons, 2004). For example, some early papers (Bezzo et al., 2005, Volka et al., 2005 and Karacan, 2003) present the design and implementation of MPC strategies aimed at the regulation of distillation columns. In this work, we propose the use of model predictive control as this technique is well suited for tackling constrained multivariable input and output (MIMO) systems. We present a control strategy based on MPC technology, focusing on the reboiler system with the explicit aim of enhancing the flexibility the CO2 capture process, whilst concurrently minimizing the operational costs. The remainder of this paper is outlined as follows: In Section 2, we identify the methodology and the novel contribution aspect of this work. Then, in Section 3, we describe the reboiler system installed in the pilot plant unit on which the model presented in this paper is based. Subsequently, in Section 4 we describe the thermodynamic and process models used in this work. Here we also detail the steady state validation of the model performed. In Section 5 we outline the control problem we are facing and the steps we have taken to tackle it. In Section 6 we present the results of the simulations we have performed and, finally, in Section 7 we present our conclusions and identify some future directions for this work.

We have presented robust methodology for the cost-optimal operation of solvent regeneration processes commonly used in post-combustion CO2 capture processes. In doing so we have integrated state-of-the-art approaches for fluids modelling and control theory. This integration is a key strength of the approach; the use of SAFT-VR to describe the reacting mixture allows us to account for the reactions at the level of the thermodynamic model, thus substantially reducing the number of equations required in the process model. This results in making the process models more tractable for the generation of linearized control models which consequently results in the generation of more reliable control models, in turn providing a more robust and accurate means of controlling CO2 capture processes. We have implemented a multi-level control architecture based on a model-predictive-control approach. The control architecture proposed in this work maximizes the flexibility of solvent regeneration process whilst simultaneously ensuring cost-optimal performance and safety. The high-level control allows the minimisation of the operating cost associated with the solvent regeneration system; one of the main barriers to deployment of large-scale CO2 capture technology. The economic optimization technique presented here exploits the fluctuating prices of energy and CO2 to minimize the daily energy consumption and can be generally applied to all the plants with CO2 capture systems. On the other hand, the low-level control presents a good performance in comparison with a control architecture based on independent PIDs controllers. The MPC controllers successfully dealt with multivariable constraints systems and made flexible the system performance by avoiding in advance flooding effects on the reboiler. We have shown that application of dynamic optimisation approaches to exploit the time-varying values of wholesale electricity and CO2 prices can lead to significant savings in the operating costs associated with post-combustion CO2 capture processes. It has been observed that this approach consistently reduces the operating cost by an average of approximately 4.66%, and in some cases by as much as 10%. We also observed that varying the lean solvent loading, or allowing CO2 to accumulate in the circulating solvent is key to enhancing the cost-optimality of the process. This in itself is an important conclusion. Typically, it has been suggested that there is a unique, optimal, value for lean solvent loading. Here, we have shown that it is in fact an important variable which should be controlled dynamically. This leads to the observation that the total quantity of solvent in the system is a useful design variable which can be used to enhance the flexibility of solvent-based CO2 capture processes. Here, we have two meanings of flexibility; flexibility of the power station to which the CO2 capture process is attached and the flexibility of the solvent regeneration process. That decarbonisation of fossil fuel-based power generation will compromise its flexibility/availability is a well recognized concern. In this paper, we have shown that this need not necessarily be such a concern. It is a key conclusion of this work that we achieve a specified CO2 capture target concurrent with the minimizing of operating cost. In power plant terms, this means that when energy demand is high, the quantity of steam directed to the regeneration process is temporarily reduced, allowing more energy to be exported to grid. In the context of the flexibility of the solvent regeneration process, we mean that the system can operate in a wide range of operating conditions. In general the reboiler systems are designed to operate in a relatively narrow range of operating conditions but in order to take advantage of the electricity prices, we need in our approach the ability to vary the operation in a wide range of operating points. This flexibility is achieved by the model predictive control formulation implemented in the lower control level as it deals with physical constraints such as pressure, temperature and flooding limitations. The system will respond in advance as it is informed by the future set-points calculated by the higher control level and in this way avoid physical limitations. Finally, we would like to point out that, while in this work, we have restricted our attention to the reboiler unit, we propose that the approach we have presented in this paper is generally applicable. Currently, the Imperial College pilot plant is under going commissioning and validation. It is intended to implement this controller on the real plant once the models have been developed and data are available Chemicalengineering (2012). In addition, a simulator tool developed in Matlab™ is available on request. In future work, we intend to apply this approach to a model of an entire CO2 capture process and study the influence of the process scale up to the results.