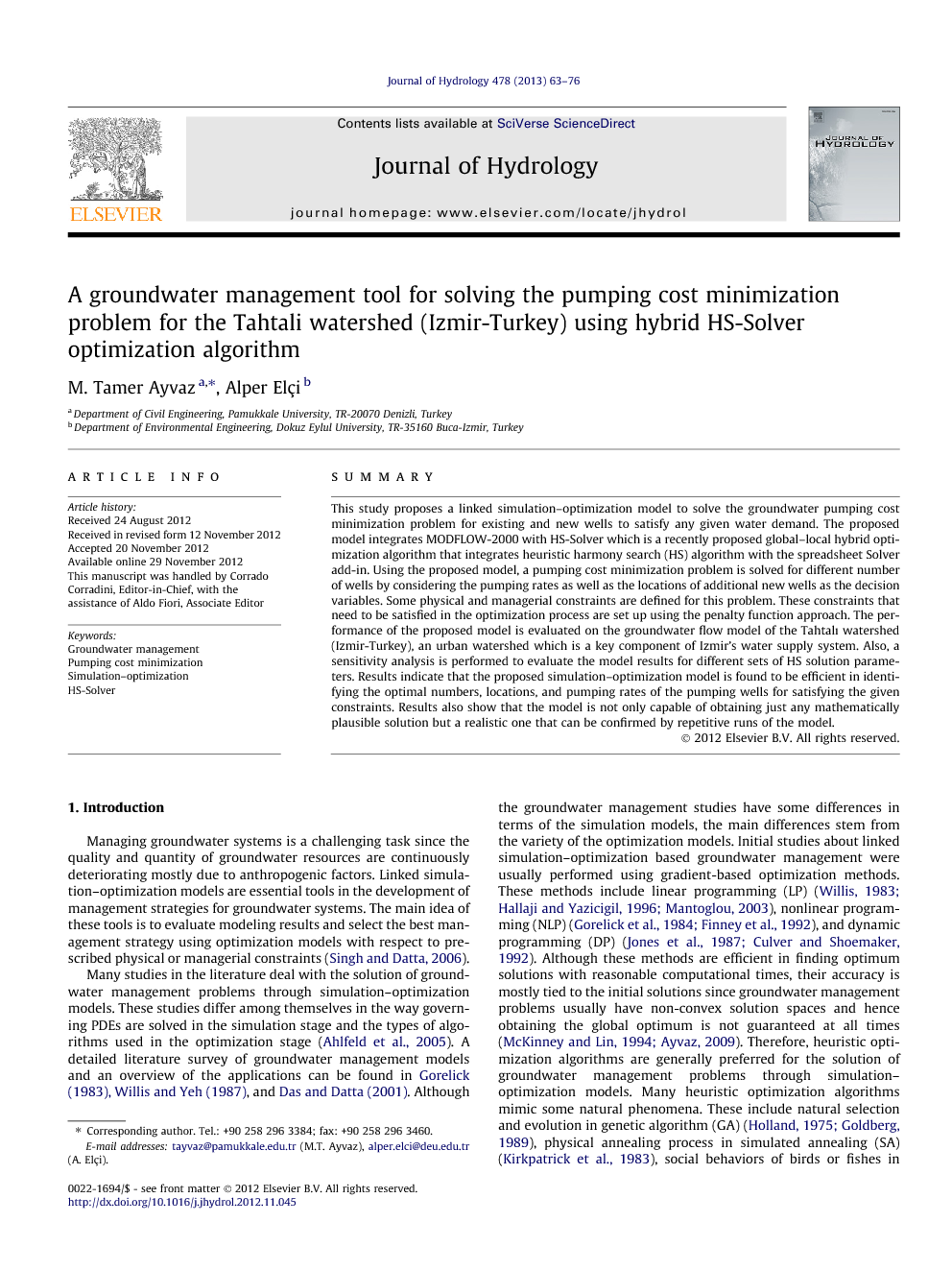 This study proposes a linked simulation–optimization model to solve the groundwater pumping cost minimization problem for existing and new wells to satisfy any given water demand. The proposed model integrates MODFLOW-2000 with HS-Solver which is a recently proposed global–local hybrid optimization algorithm that integrates heuristic harmony search (HS) algorithm with the spreadsheet Solver add-in. Using the proposed model, a pumping cost minimization problem is solved for different number of wells by considering the pumping rates as well as the locations of additional new wells as the decision variables. Some physical and managerial constraints are defined for this problem. These constraints that need to be satisfied in the optimization process are set up using the penalty function approach. The performance of the proposed model is evaluated on the groundwater flow model of the Tahtalı watershed (Izmir-Turkey), an urban watershed which is a key component of Izmir’s water supply system. Also, a sensitivity analysis is performed to evaluate the model results for different sets of HS solution parameters. Results indicate that the proposed simulation–optimization model is found to be efficient in identifying the optimal numbers, locations, and pumping rates of the pumping wells for satisfying the given constraints. Results also show that the model is not only capable of obtaining just any mathematically plausible solution but a realistic one that can be confirmed by repetitive runs of the model.

In this study, a linked simulation–optimization model is proposed to solve the groundwater pumping cost minimization problem. In the proposed model, the simulation part uses MODFLOW-2000 to simulate the groundwater flow process. This part is then linked to an optimization model where the global–local hybrid HS-Solver algorithm is used. The proposed simulation–optimization model is demonstrated on the problem of pumping cost minimization for the groundwater flow model of the Tahtalı watershed (Izmir-Turkey). The main problem here is to find alternative well field locations that can replace in the future the Halkapınar well field in the city center. With this purpose, the problem is solved for different number of wells by taking the locations and pumping rates of the new wells as the decision variables. Some physical and managerial constraints have been integrated to the solution using the penalty function approach. Finally, a sensitivity analysis is performed to evaluate the variability of model results for different HS solution parameters sets. The following conclusions can be drawn from the results of this study. Based on the identification results, it can be concluded that the use of the Halkapınar well field alone is not suitable to satisfy the given water demand due to the potential saltwater intrusion problem. This issue can be clearly seen from the results in Table 2. The identified rates for Halkapınar well field in all solutions are lower than 20,000 m3/day. This means that higher pumping rates for this well field leads to obtain penalized objective function values since the problem of saltwater intrusion is controlled by Eq. (16). Therefore, alternative well locations are sought by the optimization model. The main objective of HS-Solver is to determine the new potential well field locations with a minimum cost of pumping. The results shown in Table 2 indicate that the minimum pumping cost is obtained for the solution with four pumping wells. Since the objective of the proposed model is to seek new well locations, exact satisfaction of the given water demand is a crucial step to obtain a solution with minimum cost. Although heuristic optimization algorithms with penalty functions are successful on satisfying the given constraints, they may require high iteration numbers to exactly satisfy them. This situation can be observed in Table 1 where the amount of total water supply is greater than the given water demand. Although these values are very close to the given demand, their exact satisfaction is required to ensure minimum pumping cost. Therefore, all the solutions of HS are subjected to local search by Solver since it has an ability of satisfying the constraint equations without requiring more iterations. After solving the problem with Solver, the water demand constraint is satisfied exactly for all solutions. This result shows HS-Solver’s strong capability of finding the optimum solutions. As can be seen from the identified well locations in Fig. 7, all the new pumping wells are placed around the main streams. This outcome can be explained by the high water potential of the grid cells around the streams. Since more water potential of a grid cell corresponds to lower drawdown, the obtained solutions are associated with lower pumping cost. Furthermore, since the results of the HS based optimization model depend on the values of its related solution parameters, a sensitivity analysis is performed to determine the influence of this parameters on solution accuracy. Analysis results indicate that the response of the proposed model for different parameter sets is practically acceptable, and therefore, the proposed simulation–optimization model is as effective way of solving the pumping cost minimization problem discussed here.