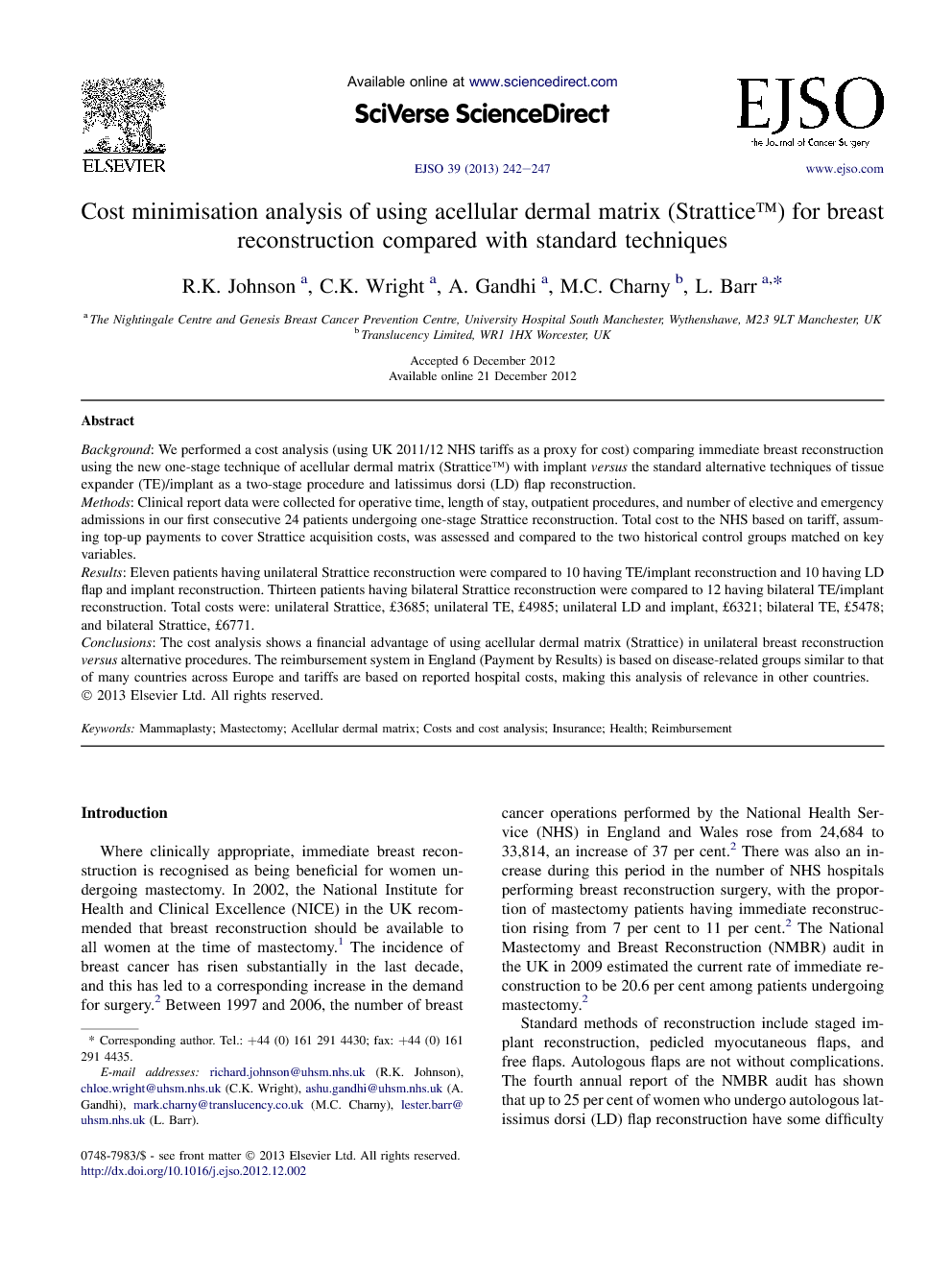 Where clinically appropriate, immediate breast reconstruction is recognised as being beneficial for women undergoing mastectomy. In 2002, the National Institute for Health and Clinical Excellence (NICE) in the UK recommended that breast reconstruction should be available to all women at the time of mastectomy.1 The incidence of breast cancer has risen substantially in the last decade, and this has led to a corresponding increase in the demand for surgery.2 Between 1997 and 2006, the number of breast cancer operations performed by the National Health Service (NHS) in England and Wales rose from 24,684 to 33,814, an increase of 37 per cent.2 There was also an increase during this period in the number of NHS hospitals performing breast reconstruction surgery, with the proportion of mastectomy patients having immediate reconstruction rising from 7 per cent to 11 per cent.2 The National Mastectomy and Breast Reconstruction (NMBR) audit in the UK in 2009 estimated the current rate of immediate reconstruction to be 20.6 per cent among patients undergoing mastectomy.2 Standard methods of reconstruction include staged implant reconstruction, pedicled myocutaneous flaps, and free flaps. Autologous flaps are not without complications. The fourth annual report of the NMBR audit has shown that up to 25 per cent of women who undergo autologous latissimus dorsi (LD) flap reconstruction have some difficulty lifting and carrying heavy objects.2 The main advantages of implant-based reconstruction are the absence of donor-site morbidity, reduced operating time, and quicker recovery. However, the standard implant technique involves a second-stage procedure after tissue expansion to implant a permanent prosthesis. It also involves full muscle coverage of the expander, which has inherent aesthetic consequences (eg, the expander tends to sit higher and lacks projection). Releasing pectoralis fibres to allow lower pole expansion improves projection, but implant rippling can be an issue when the implant is subcutaneous. Acellular dermal matrices (ADMs) in the form of AlloDerm® Regenerative Tissue Matrix (human cadaveric ADM; LifeCell Corporation, Branchburg, New Jersey, USA) and more recently Strattice™ Reconstructive Tissue Matrix (non-crosslinked intact porcine-derived ADM; LifeCell Corporation) have been used to provide implant coverage and to stabilise the position of the implant in a “cover and hold” concept. One of the important features of biologic mesh is its ability to allow neovascularisation through incorporation into host tissues3 unlike synthetic mesh, which often becomes encapsulated4 and is not used in reconstruction of the breast. We have been using Strattice for breast reconstruction in a “one-stage” technique since January 2009. The use of Strattice has allowed us to insert the final-size breast implant at the initial surgery, or to insert a one-stage, two-chamber expander implant without the need for a second operation. The purpose of this cost minimisation analysis was to compare the cost to the NHS of the index operation, consumables additional to those included in the tariff payment, hospital admissions and attendances, and complications in three groups of patients: immediate breast reconstruction using Strattice, traditional tissue expander (TE)/implant, and LD techniques. The analysis compared costs in unilateral and bilateral patients separately. The cost analysis is based on national tariffs as a proxy for hospital costs, with the addition of the acquisition cost of Strattice, which is not included in the historical average costs reported by all NHS hospitals in England on which tariffs are based. The reimbursement system in England is a diagnosis-related group (DRG)-variant and in this respect is similar to the reimbursement systems used in many other countries. Given the current focus on healthcare costs in Europe for governments and healthcare insurance companies alike, it seems timely and relevant to present a cost analysis of using Strattice in immediate breast reconstruction compared with traditional methods, taking into account the relatively high cost of biologic mesh.

We conclude that the use of Strattice for immediate breast reconstruction has clinical benefit for patients by allowing a one-stage procedure rather than two separate operations (versus TE reconstruction); avoiding potential donor-site morbidity (versus LD flap); and resulting in fewer outpatient visits for seroma drainage and TE inflation. Unilateral Strattice reconstruction has a cost benefit compared with the standard alternative techniques of both unilateral TE and LD flap reconstruction. An analysis of aesthetic outcome, longer-term complications and the need for additional revision surgeries beyond the time scale of this analysis would be of relevance for future studies.