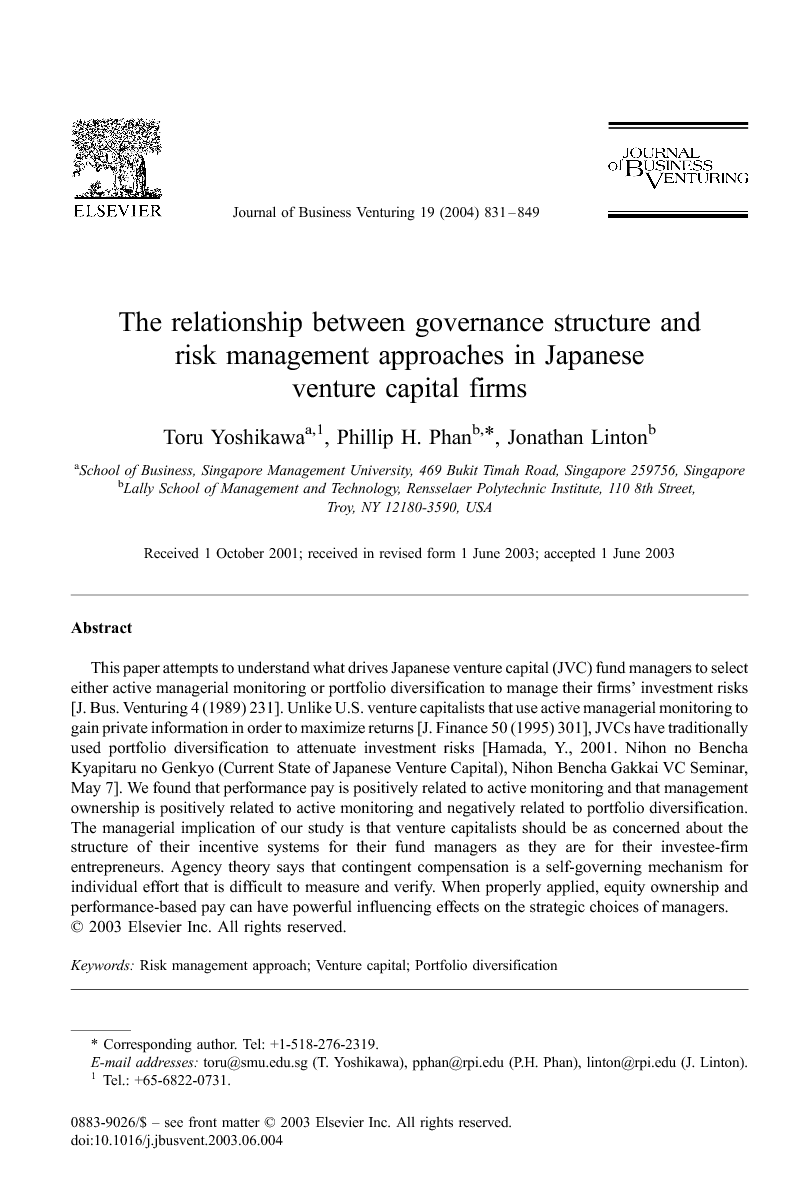 This paper attempts to understand what drives Japanese venture capital (JVC) fund managers to select either active managerial monitoring or portfolio diversification to manage their firms' investment risks [J. Bus. Venturing 4 (1989) 231]. Unlike U.S. venture capitalists that use active managerial monitoring to gain private information in order to maximize returns [J. Finance 50 (1995) 301], JVCs have traditionally used portfolio diversification to attenuate investment risks [Hamada, Y., 2001. Nihon no Bencha Kyapitaru no Genkyo (Current State of Japanese Venture Capital), Nihon Bencha Gakkai VC Seminar, May 7]. We found that performance pay is positively related to active monitoring and that management ownership is positively related to active monitoring and negatively related to portfolio diversification. The managerial implication of our study is that venture capitalists should be as concerned about the structure of their incentive systems for their fund managers as they are for their investee-firm entrepreneurs. Agency theory says that contingent compensation is a self-governing mechanism for individual effort that is difficult to measure and verify. When properly applied, equity ownership and performance-based pay can have powerful influencing effects on the strategic choices of managers.

What is the impact of the structure and governance mechanisms of a VC firm on its risk management approaches? To answer this question, we build an agency model of the relationship between the JVC firm and the managers who make these choices Robbie et al., 1997, Gompers and Lerner, 1999 and Baker and Gompers, 1999. JVCs, unlike their U.S. counterparts that use active monitoring to attenuate portfolio risks (Lerner, 1995), have traditionally used a passive approach—portfolio diversification (Hamada, 2001). However, the recent increased use of active monitoring by JVCs has allowed us to compare the factors that drive the choice of these risk management approaches Gorman and Sahlman, 1989 and Gompers and Lerner, 2001a. Briefly, our model relates the corporate affiliation of a JVC, compensation structure for its investment managers, and VC firm managerial stock ownership to the choice of active (hands-on monitoring) or passive (portfolio diversification) risk management approach. To examine this model, the paper proceeds as follows. First, we review the JVC industry, followed by the theoretical model. Then, we discuss the methods and results, concluding with some observations on the implications of our findings and directions for future research.