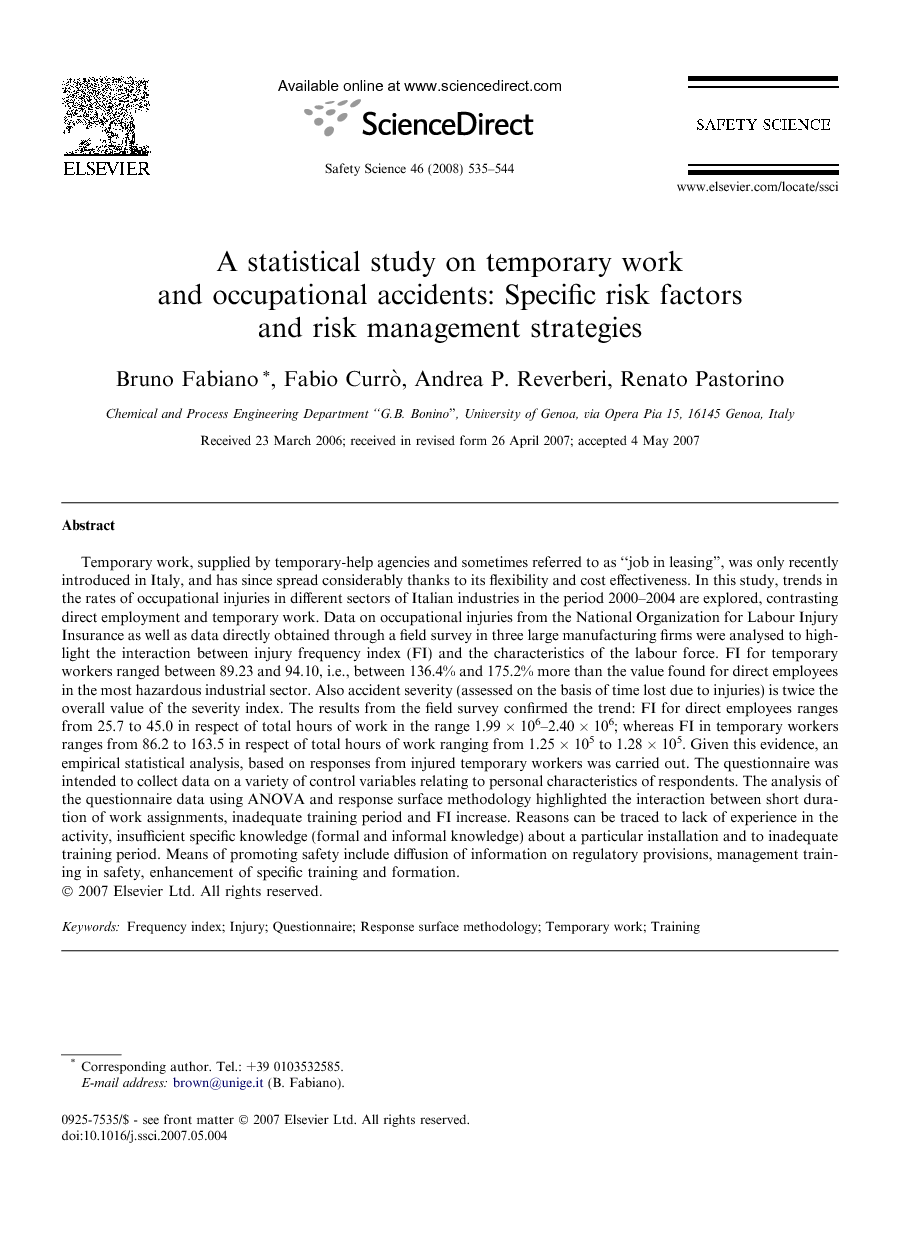 Temporary work, supplied by temporary-help agencies and sometimes referred to as “job in leasing”, was only recently introduced in Italy, and has since spread considerably thanks to its flexibility and cost effectiveness. In this study, trends in the rates of occupational injuries in different sectors of Italian industries in the period 2000–2004 are explored, contrasting direct employment and temporary work. Data on occupational injuries from the National Organization for Labour Injury Insurance as well as data directly obtained through a field survey in three large manufacturing firms were analysed to highlight the interaction between injury frequency index (FI) and the characteristics of the labour force. FI for temporary workers ranged between 89.23 and 94.10, i.e., between 136.4% and 175.2% more than the value found for direct employees in the most hazardous industrial sector. Also accident severity (assessed on the basis of time lost due to injuries) is twice the overall value of the severity index. The results from the field survey confirmed the trend: FI for direct employees ranges from 25.7 to 45.0 in respect of total hours of work in the range 1.99 × 106–2.40 × 106; whereas FI in temporary workers ranges from 86.2 to 163.5 in respect of total hours of work ranging from 1.25 × 105 to 1.28 × 105. Given this evidence, an empirical statistical analysis, based on responses from injured temporary workers was carried out. The questionnaire was intended to collect data on a variety of control variables relating to personal characteristics of respondents. The analysis of the questionnaire data using ANOVA and response surface methodology highlighted the interaction between short duration of work assignments, inadequate training period and FI increase. Reasons can be traced to lack of experience in the activity, insufficient specific knowledge (formal and informal knowledge) about a particular installation and to inadequate training period. Means of promoting safety include diffusion of information on regulatory provisions, management training in safety, enhancement of specific training and formation.

On a national level, Italy has enjoyed declining trends in the number and rates of occupational fatalities and injuries for more than three decades. While these figures are encouraging, far too many preventable injuries are still occurring. The factors influencing accident frequency can be divided into the following categories: • technical factors: low automation, multi-product industries, discontinuous operating cycles, non standardized production affect safety negatively, since they require a greater interaction between man and devices. On the other hand, a reduction in individual exposure to severe hazards was reported where mechanized processes and equipment were introduced in the mining (Asogwa, 1988) and the logging industry (Laflamme and Cloutier, 1988); • economical factors, e.g., general economic situation (Saari, 1982), unemployment rate, labour and social-insurance legislation, (Blank et al., 1996); • labour organization, e.g., management system and performance, work practice, oversight, communication structure, etc.; • environmental conditions: about half the accidents in Italy are related to labour environment (Fabiano et al., 2001) and they could be prevented by rather simple lay-out and protection measures, which however prove extremely difficult or even unfeasible in small concerns, because of operating, economic and/or space constraints (Fabiano et al., 2004); • human factors, both individual and inter-individual, e.g., workload, experience and training, competence, fatigue, etc. Current market conditions often make it necessary to resort to outsourcing to remain competitive, particularly by employing external and precarious human resources. In fact, in the last 20 years there has been a significant growth in labour governed by casual, part-time, subcontract or franchised arrangements, virtually in all OECD countries (less so in Italy, Canada and Luxenbourg) (Ferrie et al., 1999). Results of international research seem to point out that precarious labour is associated with increased fatalities, occupational injuries, illness, in various industry sectors across a number of countries (Kochan et al., 1994, Morris, 1999 and Mayhew and Quinlan, 1999). Temporary work (i.e., a job arrangement whereby workers are hired out to firms by Temporary Work Agencies) is a sort of labour outsourcing and precarious work. This kind of work arrangement, sometimes referred to as “job in leasing”, has only recently become widespread in Italy. Due to the flexibility and cost effectiveness of this contract, in the last few years Italy has experienced constant growing rates of temporary work. The whole number of contracts provided by temporary work agencies soared from 194,835 in 1999 to 744,438 in 2003, corresponding to an average increase of about 56.4% per year. Virtually, every industrial sector shared this trend, with an average daily percentage of temporary workers corresponding to 1% of “in-house employees”, for all industrial sectors in the year 2003. Process, metal–mechanic and transport sectors displayed the highest average daily percentage of temporary workers, amounting to about 3% of direct employees. In the same year, the average EC daily incidence of temporary work was 1.5%, with higher values in the UK (3.2%) and in the Netherlands (4.5%), while the daily incidence in the United States was 2.5%. Despite the international diffusion of temporary work, in the open literature there is little information on possible safety implications and contributing factors of occupational injuries. Moreover, even if most safety-related regulations and safety management systems already incorporate provisions for the management of contractors, a striking number of injuries occurs among “non in-house employees”. In Spain, 60% of occupational injuries occurred to temporary workers, with a rate nearly three times that of those in permanent jobs (Artiles and Alos-Moner, 1999). A survey conducted among three manufacturing industries of the plastic sector in the USA, showed that the trend of accident rate over the years 1993–1998 does not appear to be a steady one, either for direct employees, or for temporary workers. However, the evidence obtained from such research indicates that the injury rate for temporary workers is constantly higher (from 2.6 to 3.8 times) than the one recorded for permanent employees (Morris, 1999). This paper offers a perspective on the trends in the rates of occupational injuries in the main sectors of Italian industries, during the period 2000–2004, contrasting direct employment and temporary work and focusing attention on the human factor. Generally speaking, the different reasons for people failure can be grouped as follows: lack of training or instruction; lack of motivation; lack of physical or mental ability; slips and lapses of attention (Kletz, 1993). On this basis, an investigation into the relationship between occupational accidents and temporary work is performed, adopting a questionnaire survey, for the definition of peculiar risk factors and for setting priorities to improve safety standards in this context.

In spite of the development of safety technique in both hardware and software and of the adoption of more stringent legislative constraints on health and safety issues, still higher consideration should be paid to the human factor. Temporary workers, engaged both in the process industries and in other productive sectors, suffer a higher frequency index than in-house workers employed in the same activities. Reasons are to be traced to lack of experience in the activity, insufficient specific knowledge (formal and informal knowledge) about a particular installation and to inadequate training period. This experimental work, with the many people involved in it, provides useful suggestions for promoting safety among non-direct employees. Some of these measures may include diffusion of information on regulatory provisions, management training in safety; enhancement of specific training and formation targeted to personnel hired through staffing agencies, as well as implementation of health and safety regulations for temporary workers. Further research is required to document injury experience of temporary employees, identify training needs and devise interventions in different sectors, especially process and metal–mechanics. Moreover, it is important to conduct studies, which can embed in a model the management influences on safety in outdoor job leasing.