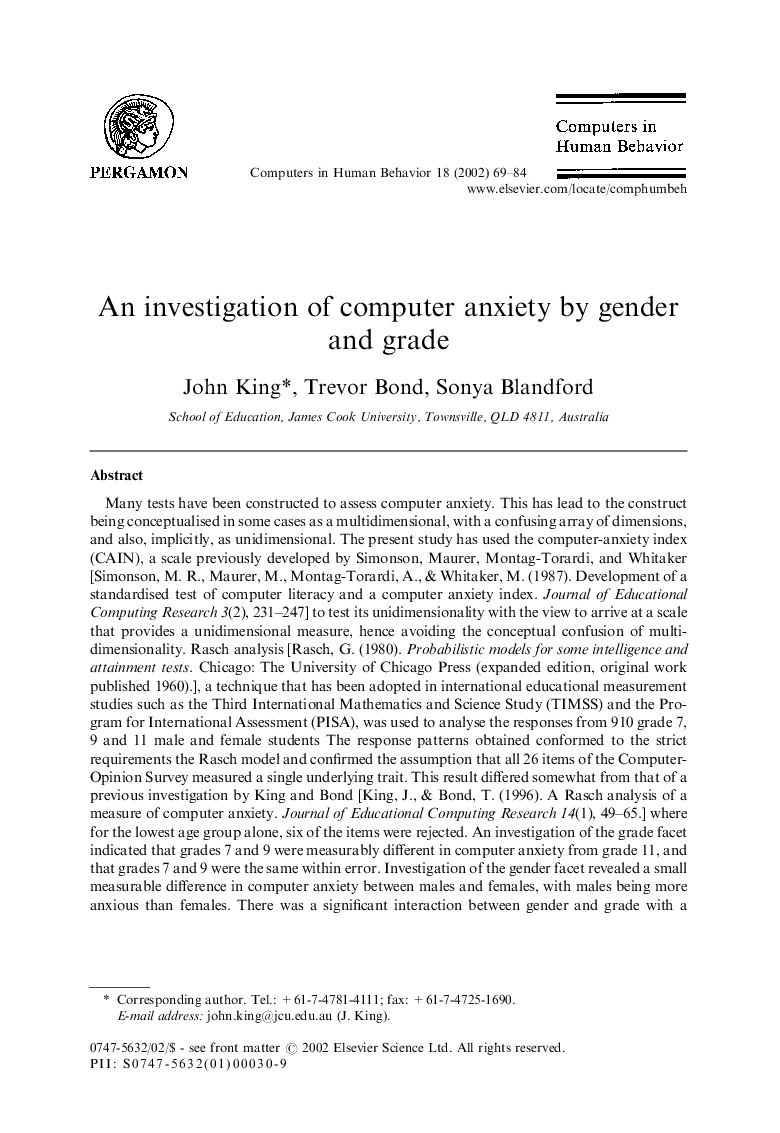 Many tests have been constructed to assess computer anxiety. This has lead to the construct being conceptualised in some cases as a multidimensional, with a confusing array of dimensions, and also, implicitly, as unidimensional. The present study has used the computer-anxiety index (CAIN), a scale previously developed by Simonson, Maurer, Montag-Torardi, and Whitaker [Simonson, M. R., Maurer, M., Montag-Torardi, A., & Whitaker, M. (1987). Development of a standardised test of computer literacy and a computer anxiety index. Journal of Educational Computing Research 3(2), 231–247] to test its unidimensionality with the view to arrive at a scale that provides a unidimensional measure, hence avoiding the conceptual confusion of multidimensionality. Rasch analysis [Rasch, G. (1980). Probabilistic models for some intelligence and attainment tests. Chicago: The University of Chicago Press (expanded edition, original work published 1960).], a technique that has been adopted in international educational measurement studies such as the Third International Mathematics and Science Study (TIMSS) and the Program for International Assessment (PISA), was used to analyse the responses from 910 grade 7, 9 and 11 male and female students The response patterns obtained conformed to the strict requirements the Rasch model and confirmed the assumption that all 26 items of the Computer-Opinion Survey measured a single underlying trait. This result differed somewhat from that of a previous investigation by King and Bond [King, J., & Bond, T. (1996). A Rasch analysis of a measure of computer anxiety. Journal of Educational Computing Research 14(1), 49–65.] where for the lowest age group alone, six of the items were rejected. An investigation of the grade facet indicated that grades 7 and 9 were measurably different in computer anxiety from grade 11, and that grades 7 and 9 were the same within error. Investigation of the gender facet revealed a small measurable difference in computer anxiety between males and females, with males being more anxious than females. There was a significant interaction between gender and grade with a reversal of anxiety interaction occurring at about the grade 9 level.