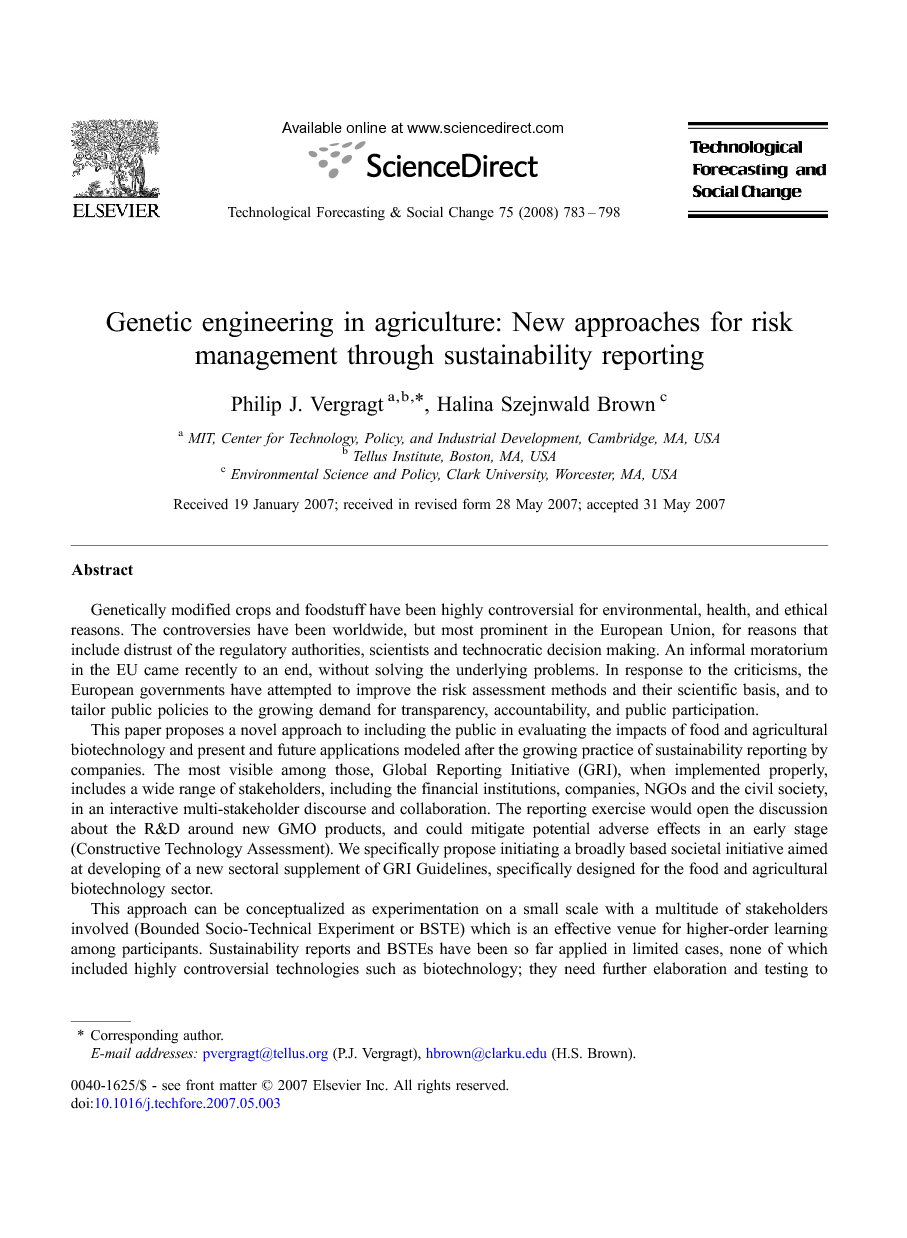 Genetically modified crops and foodstuff have been highly controversial for environmental, health, and ethical reasons. The controversies have been worldwide, but most prominent in the European Union, for reasons that include distrust of the regulatory authorities, scientists and technocratic decision making. An informal moratorium in the EU came recently to an end, without solving the underlying problems. In response to the criticisms, the European governments have attempted to improve the risk assessment methods and their scientific basis, and to tailor public policies to the growing demand for transparency, accountability, and public participation. This paper proposes a novel approach to including the public in evaluating the impacts of food and agricultural biotechnology and present and future applications modeled after the growing practice of sustainability reporting by companies. The most visible among those, Global Reporting Initiative (GRI), when implemented properly, includes a wide range of stakeholders, including the financial institutions, companies, NGOs and the civil society, in an interactive multi-stakeholder discourse and collaboration. The reporting exercise would open the discussion about the R&D around new GMO products, and could mitigate potential adverse effects in an early stage (Constructive Technology Assessment). We specifically propose initiating a broadly based societal initiative aimed at developing of a new sectoral supplement of GRI Guidelines, specifically designed for the food and agricultural biotechnology sector. This approach can be conceptualized as experimentation on a small scale with a multitude of stakeholders involved (Bounded Socio-Technical Experiment or BSTE) which is an effective venue for higher-order learning among participants. Sustainability reports and BSTEs have been so far applied in limited cases, none of which included highly controversial technologies such as biotechnology; they need further elaboration and testing to become possibly highly effective concepts and tools for mitigating conflicts on the societal implications of emerging technologies, and to lead to better public policies and greater social trust.

Genetically modified organisms (GMOs) have been introduced in the agricultural system and on the market of consumer goods in the last 10–20 years, initially in the USA but also increasingly in developing countries. Since the discovery of genetic engineering, with its potential to modify DNA of living organisms, discussion and controversy have been abundant [1] and [2] both cited in [3]. Europe has witnessed a particularly strong resistance to the introduction of GMOs in agriculture and for consumer food products, both from consumers, national governments and from the EU. The public objections had numerous causes, including the concerns about the risk assessment, the ethics and equity issues, power relations and the mistrust of technocrats and public authorities. The resistance in Asia, Latin America and North America has been generally weaker than in Europe, although some authors have voiced scathing criticism of the US governments and the industrial lobby for abusing famine in Africa to foster the spread of GM food to developing countries [4]. In response to the criticism, the European governments have attempted to improve the risk assessment methods and its scientific basis, and to tailor public policies to the growing demand for transparency, accountability, and public participation. Much less progress has occurred to date in the actual articulation of these ideas: the form which such public participation might take; how it would contribute to greater transparency and accountability; and how it would contribute to more effective and legitimate public policies. In this paper, we contribute to clarifying these poorly elaborated concepts. Starting with the assumption that discourse and public engagement are indeed positive and necessary for solving the GMO controversy, we argue that the growing practice of voluntary sustainability reporting by companies can serve to enhance a discourse, including the widest possible range of participants, some of whom have been until now kept outside the debate; and that a multi-stakeholder discourse so created enhances societal participation in the strategic corporate decisions regarding the research and development trajectories for agricultural GMOs – constructive technology assessment – and elevates the idea of social accountability and social responsibility of producers of GMOs.

In this article, we have developed a framework for managing the societal controversy around GMOs in agriculture, in food and in fodder. We have argued that GMOs constitute an example of a new technology with largely unknown consequences and risks, as well as high potential benefits for society. Risk assessment in its traditional form, as proposed and practices by many actors, both scientists and regulators, appears to be inadequate and is by many actors perceived as overly technocratic. Many authors call for new and improved forms of public participation in the public debate, in decision making, and in regulation. However, these pleas are seldom specific. Public debate has been intense, propelled by a wide range of NGOs and concerned scientists, and is magnified by cases of inadequate regulation, unwanted incidents, and sometimes fraud. However, we argue in this paper that this debate comes often too late, when the GMOs are already on the market, shipped overseas, and for sale in the supermarkets. One of the important issues we address in this paper is the need for more transparency very early in the research and development (R&D) process, where the chances of influencing companies' behavior are greatest, and the economic stakes are not yet so high. This is an example of Constructive Technology Assessment early in the R&D process. It is highly interwoven with the issue of intellectual property rights and patents on the one hand, and the emerging institution of public disclosure of information on the other hand. We argue that the Global Reporting Initiative (GRI) provides both a vehicle to engage the public and other key stakeholders at the R&D stage of GMO development. This is not easy, given the secrecy of companies and the high economic and social stakes, but it is necessary in order to alleviate the unease and unrest in the civil society. We have argued that such a GRI process can be conceptualized as a small-scale socio-technical experiment, which offers great opportunities for higher-order learning among a wide variety of stakeholders, including those who have not been involved earlier in the process. Such an approach could and should be part of any regulatory framework, so that enough resources and time are available for a public discourse, possible course corrections, and regulation that would satisfy at least the great majority of the concerned stakeholders. BSTEs offer opportunities for experimenting and learning, for discourse and dialogue, on various levels from problem definitions on specific issues to framing the issues in different ways. Although it is highly unlikely that world views of the participants will change in such a discourse, it is very well possible that a certain level of congruence in problem definitions can be reached, meaning that different parties recognize each other's problem definitions and problem framings as legitimate, and engage in searching solutions that accommodate each parties' interests and beliefs. Mutual trust building is an important part of such an endeavor. It is to be expected that the speed of introduction of GMOs will be greatly reduced at the very least. Given the widespread unease about technological developments that are going too fast to allow accommodation of institutions, this could be hailed as a positive development by all parties. Of course, there will be parties who are not interested in such a discourse. On the one hand, some MNCs could prefer to continue on the present path of relatively fast introduction of new GMOs on the market, ignoring the emerging new rules of the game, and to improve their market share world-wide. (However, the characteristics of an emergent institution imply that such behavior could be increasingly labeled as unacceptable, thus damaging the reputation of such companies.) On the other hand, some NGOs may continue to battle against all forms of GMOs for reasons ranging from ethical to environmental to social and political and economical. It would be interesting to study further if and how emerging institutions such as GRI and emerging practices such as BSTEs would create enough mechanisms to accommodate divergent worldviews and interpretive frames. Finally we might be criticized for advocating solutions that are but another form of enlightened technocratic approach. For better or for worse, emerging technologies cannot be ignored, and deserve serious attention from technologists, social scientists, politics, and representatives of the general public. It is unimaginable that this can be realized without at least employing somewhat technical approaches, together with all non-technical arguments. It depends on the specific forms of the reporting system and the socio-technical experiment whether this process will be branded as neo-technocratic or as truly democratic.