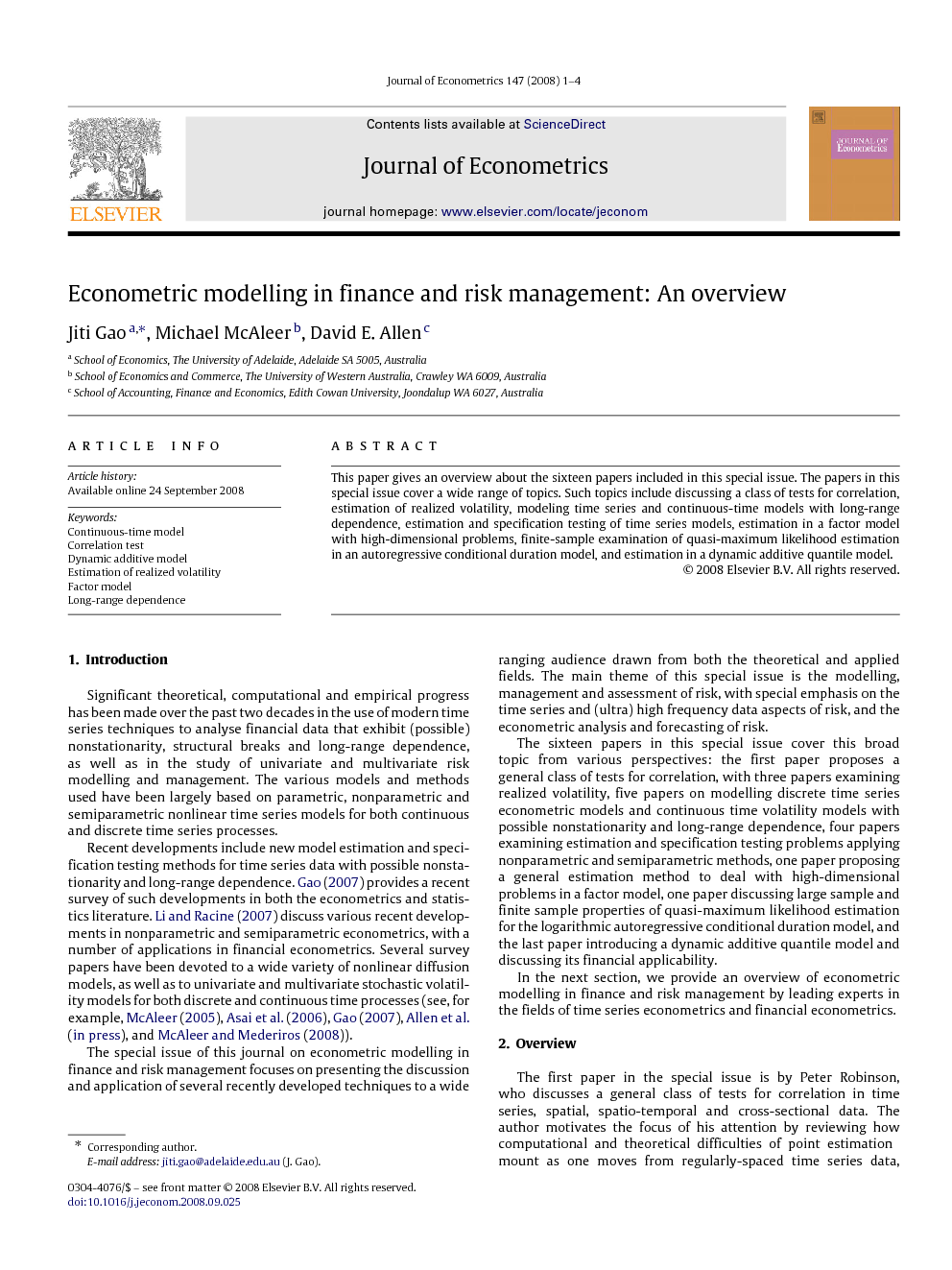 This paper gives an overview about the sixteen papers included in this special issue. The papers in this special issue cover a wide range of topics. Such topics include discussing a class of tests for correlation, estimation of realized volatility, modeling time series and continuous-time models with long-range dependence, estimation and specification testing of time series models, estimation in a factor model with high-dimensional problems, finite-sample examination of quasi-maximum likelihood estimation in an autoregressive conditional duration model, and estimation in a dynamic additive quantile model.

Significant theoretical, computational and empirical progress has been made over the past two decades in the use of modern time series techniques to analyse financial data that exhibit (possible) nonstationarity, structural breaks and long-range dependence, as well as in the study of univariate and multivariate risk modelling and management. The various models and methods used have been largely based on parametric, nonparametric and semiparametric nonlinear time series models for both continuous and discrete time series processes. Recent developments include new model estimation and specification testing methods for time series data with possible nonstationarity and long-range dependence. Gao (2007) provides a recent survey of such developments in both the econometrics and statistics literature. Li and Racine (2007) discuss various recent developments in nonparametric and semiparametric econometrics, with a number of applications in financial econometrics. Several survey papers have been devoted to a wide variety of nonlinear diffusion models, as well as to univariate and multivariate stochastic volatility models for both discrete and continuous time processes (see, for example, McAleer (2005), Asai et al. (2006), Gao (2007), Allen et al. (in press), and McAleer and Mederiros (2008)). The special issue of this journal on econometric modelling in finance and risk management focuses on presenting the discussion and application of several recently developed techniques to a wide ranging audience drawn from both the theoretical and applied fields. The main theme of this special issue is the modelling, management and assessment of risk, with special emphasis on the time series and (ultra) high frequency data aspects of risk, and the econometric analysis and forecasting of risk. The sixteen papers in this special issue cover this broad topic from various perspectives: the first paper proposes a general class of tests for correlation, with three papers examining realized volatility, five papers on modelling discrete time series econometric models and continuous time volatility models with possible nonstationarity and long-range dependence, four papers examining estimation and specification testing problems applying nonparametric and semiparametric methods, one paper proposing a general estimation method to deal with high-dimensional problems in a factor model, one paper discussing large sample and finite sample properties of quasi-maximum likelihood estimation for the logarithmic autoregressive conditional duration model, and the last paper introducing a dynamic additive quantile model and discussing its financial applicability. In the next section, we provide an overview of econometric modelling in finance and risk management by leading experts in the fields of time series econometrics and financial econometrics.