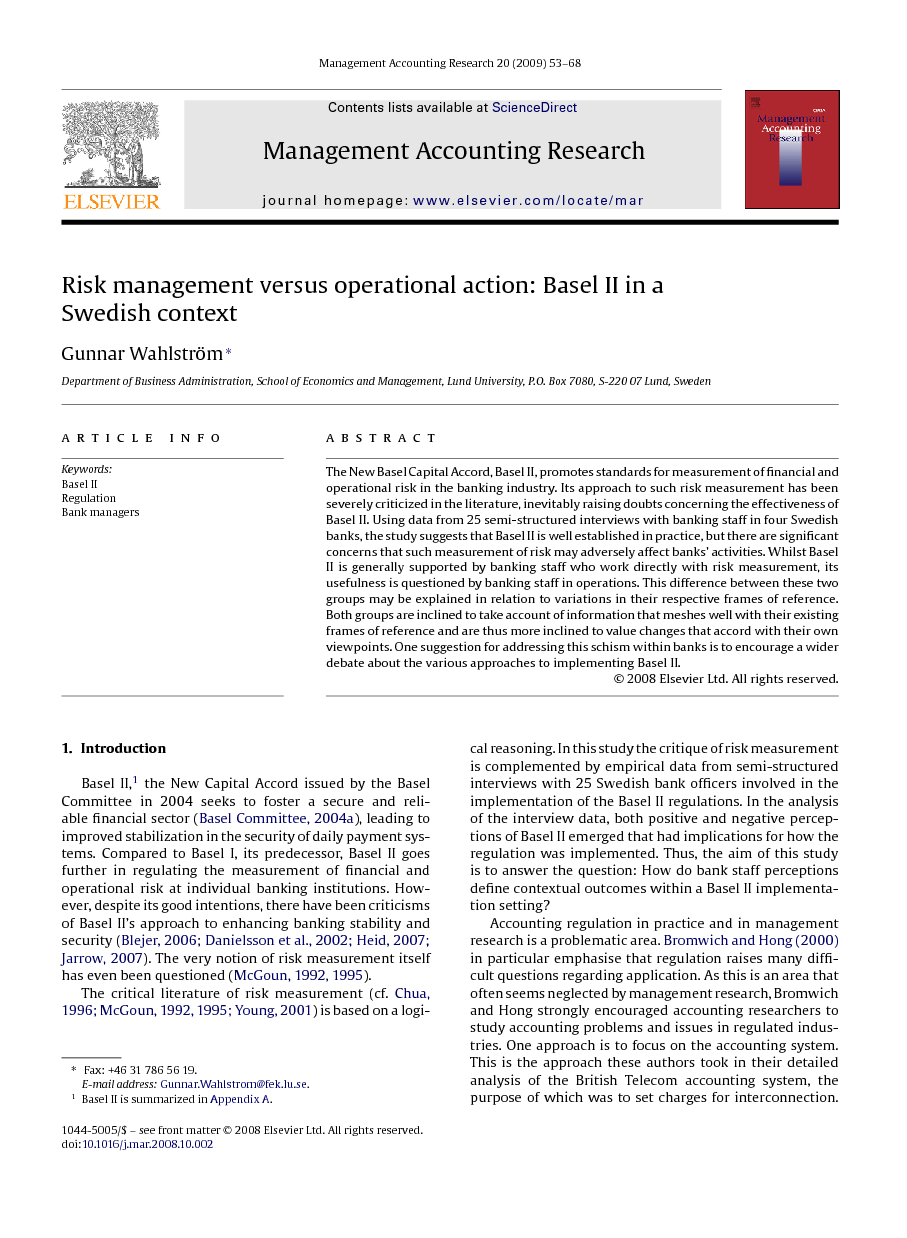 The New Basel Capital Accord, Basel II, promotes standards for measurement of financial and operational risk in the banking industry. Its approach to such risk measurement has been severely criticized in the literature, inevitably raising doubts concerning the effectiveness of Basel II. Using data from 25 semi-structured interviews with banking staff in four Swedish banks, the study suggests that Basel II is well established in practice, but there are significant concerns that such measurement of risk may adversely affect banks’ activities. Whilst Basel II is generally supported by banking staff who work directly with risk measurement, its usefulness is questioned by banking staff in operations. This difference between these two groups may be explained in relation to variations in their respective frames of reference. Both groups are inclined to take account of information that meshes well with their existing frames of reference and are thus more inclined to value changes that accord with their own viewpoints. One suggestion for addressing this schism within banks is to encourage a wider debate about the various approaches to implementing Basel II.

Basel II,1 the New Capital Accord issued by the Basel Committee in 2004 seeks to foster a secure and reliable financial sector (Basel Committee, 2004a), leading to improved stabilization in the security of daily payment systems. Compared to Basel I, its predecessor, Basel II goes further in regulating the measurement of financial and operational risk at individual banking institutions. However, despite its good intentions, there have been criticisms of Basel II's approach to enhancing banking stability and security (Blejer, 2006, Danielsson et al., 2002, Heid, 2007 and Jarrow, 2007). The very notion of risk measurement itself has even been questioned (McGoun, 1992 and McGoun, 1995). The critical literature of risk measurement (cf. Chua, 1996, McGoun, 1992, McGoun, 1995 and Young, 2001) is based on a logical reasoning. In this study the critique of risk measurement is complemented by empirical data from semi-structured interviews with 25 Swedish bank officers involved in the implementation of the Basel II regulations. In the analysis of the interview data, both positive and negative perceptions of Basel II emerged that had implications for how the regulation was implemented. Thus, the aim of this study is to answer the question: How do bank staff perceptions define contextual outcomes within a Basel II implementation setting? Accounting regulation in practice and in management research is a problematic area. Bromwich and Hong (2000) in particular emphasise that regulation raises many difficult questions regarding application. As this is an area that often seems neglected by management research, Bromwich and Hong strongly encouraged accounting researchers to study accounting problems and issues in regulated industries. One approach is to focus on the accounting system. This is the approach these authors took in their detailed analysis of the British Telecom accounting system, the purpose of which was to set charges for interconnection. Another approach, the one taken by this study, is to focus on users’ opinions of regulation rather than on the accounting system. This study is also distinct from the Bromwich and Hong study in that it presents empirical material from another highly regulated industry, in this case, the banking sector. It is claimed that “accounting is what accountants do” (Young, 2006, p. 581). In Basel II incentives exist to measure risk and to use the information acquired in internal decision making (Basel Committee, 2004b). Accountants are involved with building up such information systems and processing the resulting information for internal decisions. Accountants also use Basel II to report to supervisory authorities and to inform the market of the levels of bank risk. Thus accountants and Basel II have become closely interrelated. Like its predecessor, Basel I, it is anticipated that Basel II will be used worldwide (Basel Committee, 2004b). In comparison with Basel I, however, it is expected that Basel II will reward banks that measure risk levels2 and use this information in their daily business to lower their required capital reserves. With lower capital reserves, more capital is freed up for investment, resulting in increased profits. Banking staff from the four largest Swedish banks who were interviewed in this study expressed both positive and negative opinions of Basel II. The most frequently stated positive opinions were that the measurement of risk is deeply rooted in bank practice, that there are great advantages to measuring risk using the models some banks have already developed and were allowed to use, and that Basel II creates more efficient internal systems and better measurements for control of risk. Amongst the most commonly expressed negative opinions, interviewees stated their resistance to allowing quantitative risk modelling to unduly influence daily practice, their concern that theoretically derived models do not actually work in practice, their fear of increased centralisation, and their belief that the good practice formulations in Basel II were altogether too vague. Additionally, interviewees felt that the implementation of Basel II required excessively large amounts of resources. Clearly, the positive opinions were expressed by the category of interviewees, including risk managers and project leaders, who worked directly with risk management and assessment. Conversely, most negative opinions were expressed by interviewees engaged primarily in operational tasks. The differences in the groups can be explained in terms of frames of reference. Consistent with typical human behaviour as shown in prior research, these interviewees were most likely to accept changes that supported their pre-existing beliefs (Bateson, 1972, Hedberg and Jönsson, 1978, Jönsson and Lundin, 1977 and Young, 2003). An additional intent of this study is to contribute to the critical literature on accounting numbers. This literature criticizes the role of the researcher in society and calls for the academic community to take a greater role in improving practice (Briloff, 1993, Lee, 1995, Lee, 2006, Sikka et al., 1995, Tinker, 2002, Tinker and Carter, 2002, West, 2003 and Willmott et al., 1993). The paper is structured as follows. The Basel Committee and the rationale underpinning Basel II are summarized, followed by a critique of its measurement of risk approach and then by an outline of the method. Thereafter, the paper presents and analyzes the interviewees’ opinions. The research findings are then presented and discussed. The paper concludes with a proposed solution for overcoming the problems that potentially arise owing to conflicting bank officers’ opinions of Basel II. Finally, the paper makes suggestions for future research in the area.