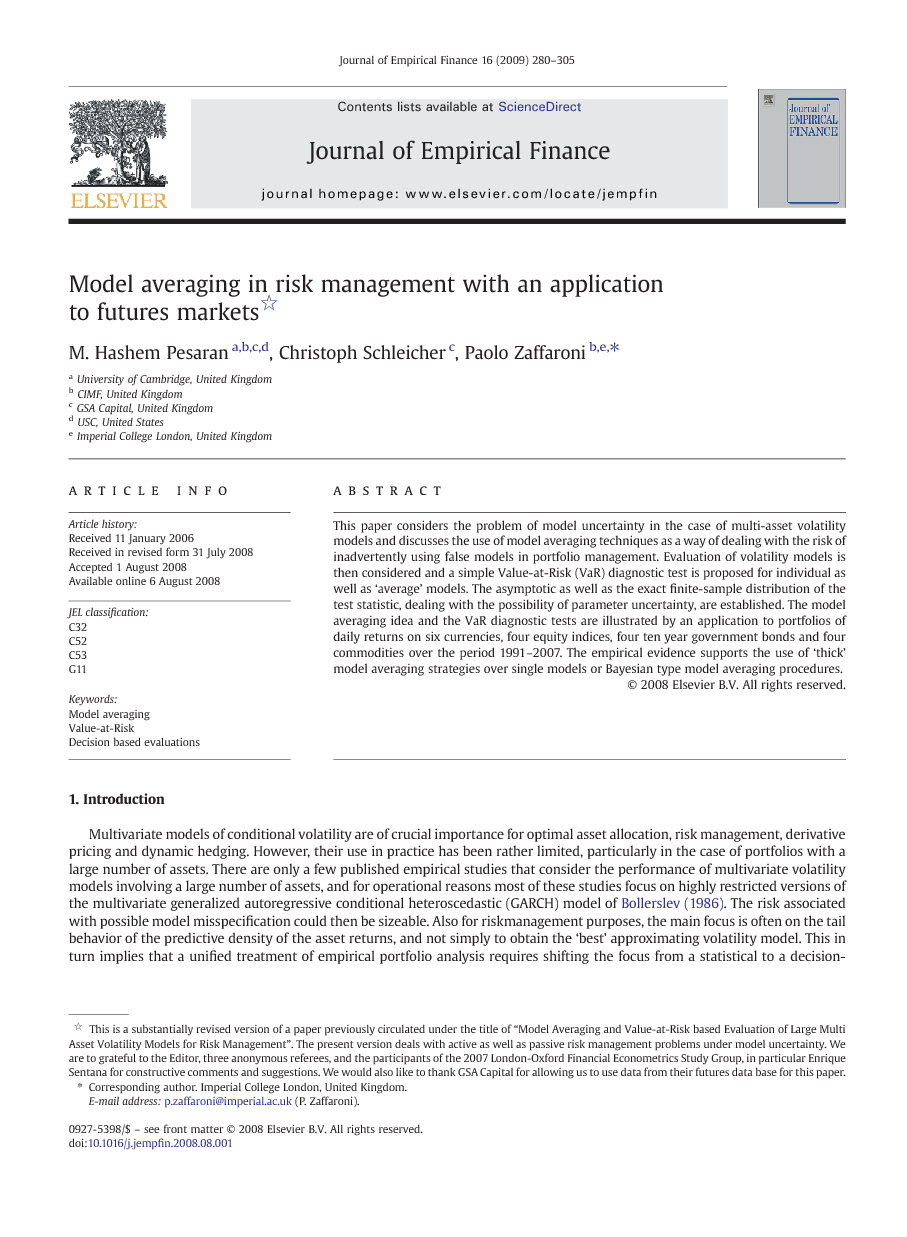 This paper considers the problem of model uncertainty in the case of multi-asset volatility models and discusses the use of model averaging techniques as a way of dealing with the risk of inadvertently using false models in portfolio management. Evaluation of volatility models is then considered and a simple Value-at-Risk (VaR) diagnostic test is proposed for individual as well as ‘average’ models. The asymptotic as well as the exact finite-sample distribution of the test statistic, dealing with the possibility of parameter uncertainty, are established. The model averaging idea and the VaR diagnostic tests are illustrated by an application to portfolios of daily returns on six currencies, four equity indices, four ten year government bonds and four commodities over the period 1991–2007. The empirical evidence supports the use of ‘thick’ model averaging strategies over single models or Bayesian type model averaging procedures.

This paper considers the problem of model uncertainty in the context of multivariate volatility models and notes that it is particularly important given the highly restrictive nature of these models that are used in practice. To deal with model uncertainty we advocate the use of model averaging techniques where an ‘average’ model is constructed by combining the predictive densities of the models under consideration, using a set of weights that reflect the models’ relative in-sample performance. We consider ‘thick’ modelling as well as (approximate) Bayesian modelling frameworks. Second, the paper proposes a simple decision-based model evaluation technique that compares the volatility models in terms of their Value-at-Risk performance. The proposed test is applicable to individual as well as to average models, and can be used in a variety of contexts. Under mild regularity conditions, the test is shown to have a Binomial distribution when evaluation sample (T1) is finite and T0 (the estimation sample) is sufficiently large. The proposed test converges to a standard Normal variate provided T1 / T0 + 1 / T1 → 0, a condition also encountered in the forecast evaluation literature that uses the root mean square error as an evaluation criterion, as discussed in West (1996). The proposed VaR test is invariant to the portfolio weights and is shown to be consistent under departures from the null hypothesis. The Binomial version of the VaR test could have important applications in credit risk literature where the evaluation samples are typically short. In the empirical application we experimented with AIC and SBC weights and found that, due to the large sample sizes available, they led to very similar results with the selected models often totally dominating the rest. The model most often selected by both criteria turned out to be the TDCC model. In out of sample evaluation, only the TDCC model managed to pass the VaR diagnostic tests. Interesting enough, the simplest of all data filters used in this paper, namely the Equal Weighted Moving Average filter also performed well; doing better than other data filters as well as the O-GARCH specifications. In general, the ‘thick’ modelling approach turned out to be the most reliable within the class of models and model average strategies that we considered. Thick model averaging strategies consistently had low VaR exceedance frequencies (relative to most single models), whilst retaining high information ratios. Overall, the only strategy that was not rejected by our VaR diagnostic tests was the equal-weighted average model based on the top 25 models (ranked by AIC) and assuming Student t innovations with 7 degrees of freedom. Finally, while model averaging provides a useful alternative to the two-step model selection strategy, it is nevertheless subject to its own form of uncertainty, namely the choice of the space of models to be considered and their respective weights. It is therefore important that applications of model averaging techniques are investigated for their robustness to such choices. In the case of our application it is clearly desirable to consider also other forms of multivariate volatility models, which could be the subject of future research.