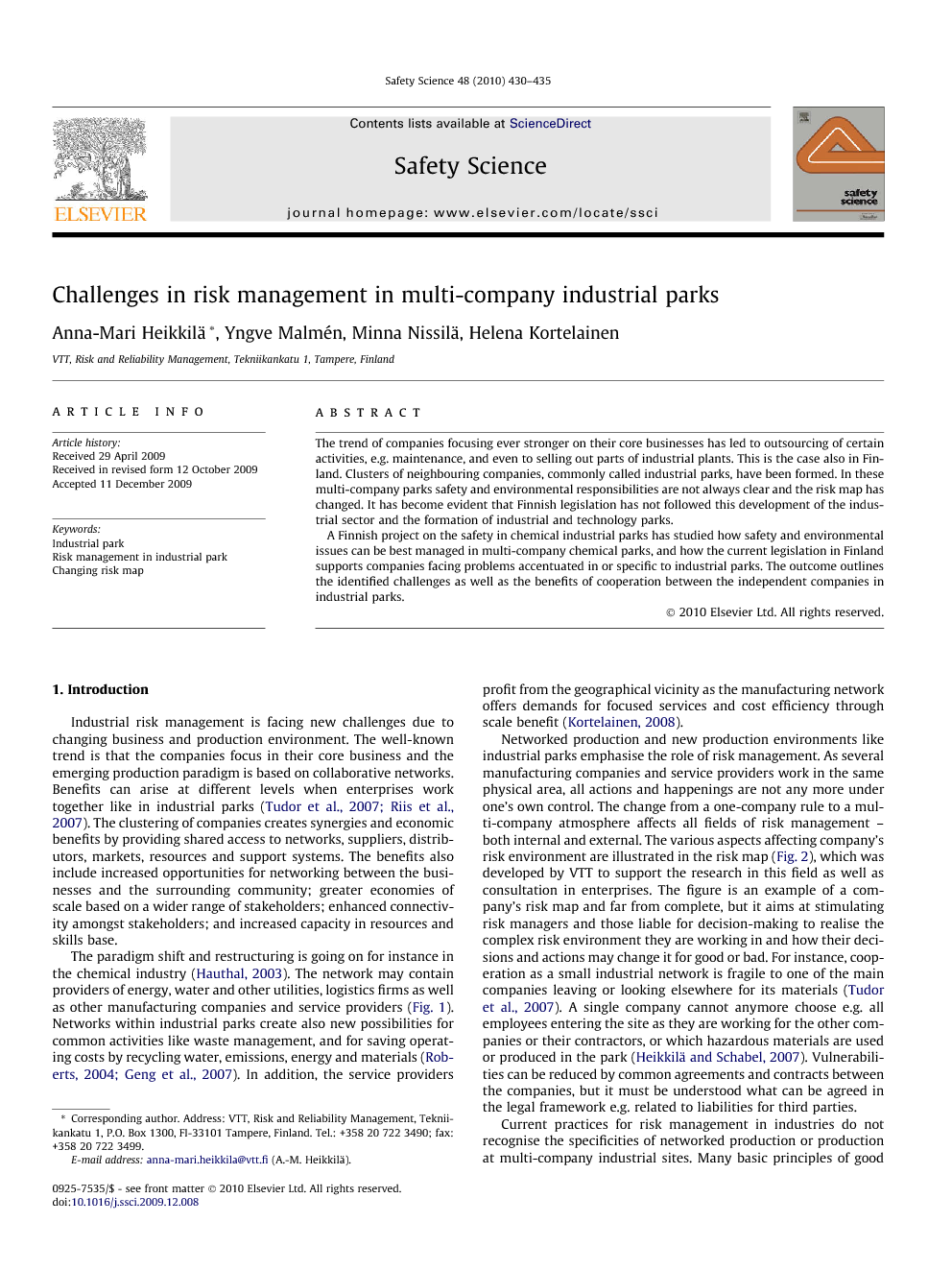 The trend of companies focusing ever stronger on their core businesses has led to outsourcing of certain activities, e.g. maintenance, and even to selling out parts of industrial plants. This is the case also in Finland. Clusters of neighbouring companies, commonly called industrial parks, have been formed. In these multi-company parks safety and environmental responsibilities are not always clear and the risk map has changed. It has become evident that Finnish legislation has not followed this development of the industrial sector and the formation of industrial and technology parks. A Finnish project on the safety in chemical industrial parks has studied how safety and environmental issues can be best managed in multi-company chemical parks, and how the current legislation in Finland supports companies facing problems accentuated in or specific to industrial parks. The outcome outlines the identified challenges as well as the benefits of cooperation between the independent companies in industrial parks.

Industrial risk management is facing new challenges due to changing business and production environment. The well-known trend is that the companies focus in their core business and the emerging production paradigm is based on collaborative networks. Benefits can arise at different levels when enterprises work together like in industrial parks (Tudor et al., 2007 and Riis et al., 2007). The clustering of companies creates synergies and economic benefits by providing shared access to networks, suppliers, distributors, markets, resources and support systems. The benefits also include increased opportunities for networking between the businesses and the surrounding community; greater economies of scale based on a wider range of stakeholders; enhanced connectivity amongst stakeholders; and increased capacity in resources and skills base. The paradigm shift and restructuring is going on for instance in the chemical industry (Hauthal, 2003). The network may contain providers of energy, water and other utilities, logistics firms as well as other manufacturing companies and service providers (Fig. 1). Networks within industrial parks create also new possibilities for common activities like waste management, and for saving operating costs by recycling water, emissions, energy and materials (Roberts, 2004 and Geng et al., 2007). In addition, the service providers profit from the geographical vicinity as the manufacturing network offers demands for focused services and cost efficiency through scale benefit (Kortelainen, 2008). Networked production and new production environments like industrial parks emphasise the role of risk management. As several manufacturing companies and service providers work in the same physical area, all actions and happenings are not any more under one’s own control. The change from a one-company rule to a multi-company atmosphere affects all fields of risk management – both internal and external. The various aspects affecting company’s risk environment are illustrated in the risk map (Fig. 2), which was developed by VTT to support the research in this field as well as consultation in enterprises. The figure is an example of a company’s risk map and far from complete, but it aims at stimulating risk managers and those liable for decision-making to realise the complex risk environment they are working in and how their decisions and actions may change it for good or bad. For instance, cooperation as a small industrial network is fragile to one of the main companies leaving or looking elsewhere for its materials (Tudor et al., 2007). A single company cannot anymore choose e.g. all employees entering the site as they are working for the other companies or their contractors, or which hazardous materials are used or produced in the park (Heikkilä and Schabel, 2007). Vulnerabilities can be reduced by common agreements and contracts between the companies, but it must be understood what can be agreed in the legal framework e.g. related to liabilities for third parties. Current practices for risk management in industries do not recognise the specificities of networked production or production at multi-company industrial sites. Many basic principles of good safety and risk management were developed in times when industries were dominated by large, centralised, and even bureaucratic companies. Networked operating model adds on level of complexity to the safety and risk management for instance by increasing the players at physically restricted sites. It also creates dependability that is not anymore managed by one-company. At the same time, communication flows have become more inter-organisational. This becomes especially an issue in contractual negotiations, which in many cases results in an increase in complexity and a loss in comprehensibility. In Finland, both industrial companies and the authorities have faced lack of knowledge and experience related to the changing risk map at industrial parks. The legislation does not acknowledge industrial parks and their unique problems or give any specific support in contracting or any other legal issues. According to the current Finnish legislation the main companies at an industrial park are independent, managing autonomously their ownerships or contracts over the plots and e.g. safety issues. Maintaining and development of the common infrastructure may cover water delivery, maintaining sewers, heat production and distribution, maintaining roads and parking areas, security and guarding. It is therefore possible that some of the relationships between companies at an industrial park are according to Finnish legislation falling under the criteria of a Shared Workplace or a Shared Hazards Workplace. The confusion and lack of knowledge among companies as well as among the authorities has led to the need to develop guidance and good practical examples of solutions to various actors present in industrial parks. In this paper, the focus is in changing production and business environment and its effects on companies’ risk maps and especially on external risks related to dependability with other companies. The spectrum of dependences creates a managerial problem, as many safety issues need to be commonly resolved even there are no legal or even contractual obligation for all operators at the park to follow the same rules. The paper describes the problems encountered in the Finnish multi-company industrial sites with industrial production involving the use of hazardous chemicals on a large scale. The emphasis is on aspects affecting several companies in the site, such as safety, health and environmental aspects, and on issues related especially to situations specific to multi-company industrial parks. The paper introduces a new definition of “industrial park” and solutions to support the risk management in the multi-company industrial parks.

Outsourcing activities and selling out parts of industrial plants has led to a changing production and business environment. The formed multi-company industrial parks have several benefits to gain, but the operation side by side on the same industrial site or even sharing a working space generate various challenges to risk, safety and security management. It may be argued that splitting organisations may result in better communication by forcing organisations to communicate with each other. However, it is easier for different organisations to develop conflicting interests around safety than for departments in one organisation. The companies and their employees at the site are facing a new situation with several different risk management strategies and safety rules, which in the worst case may be contradictory. To ensure a safe, reliable and undisturbed production environment, there is a strong need for cooperation and common agreements between companies operating in the same industrial park. These new multi-company industrial clusters with changing risk maps do not fit into the traditional definitions for industrial areas. A new definition for industrial parks with multiple independent companies was formed in this paper. The definition was used while identifying the risks and their possible solutions in multi-company industrial areas. The current legislation in Finland, or even the so-called SEVESO-directive, does not acknowledge industrial parks and their specific problems. Thus, there are very few supporting guidelines for the companies trying to form fair and balanced operational environment into their park. And it is not always clear to the companies themselves, which laws are binding them and their operation next to each other inside the park. When enterprises work together like in industrial parks it creates synergies and economic benefits by providing shared access to networks, suppliers, distributors, markets, resources and support systems (Tudor et al., 2007). It is also possible to save operating costs by recycling water, emissions, energy and materials and thus also reducing waste collection costs (Roberts, 2004), and to support the intensification of land-use planning especially in crowded and urban areas (Aragonés-Beltrán et al., 2008). The challenge is how to identify and manage these opportunities in the best ways and how to avoid possible risks. Based on the experience of this project, it is evident that companies operating in industrial parks face open questions related to the guidelines of cooperation and sharing of responsibilities. It can be seen that there is a need to study more the specific problem areas in industrial parks and develop guidelines or even legislation for their support. There can be seen benefits for the companies operating in industrial parks or otherwise in a tightly networked business environment as well as the communities in industrial areas, while encouraging companies to form new industrial clusters and thus to reduce e.g. the number of separate hazardous installations in the area or the environmental effects by better recycling opportunities.