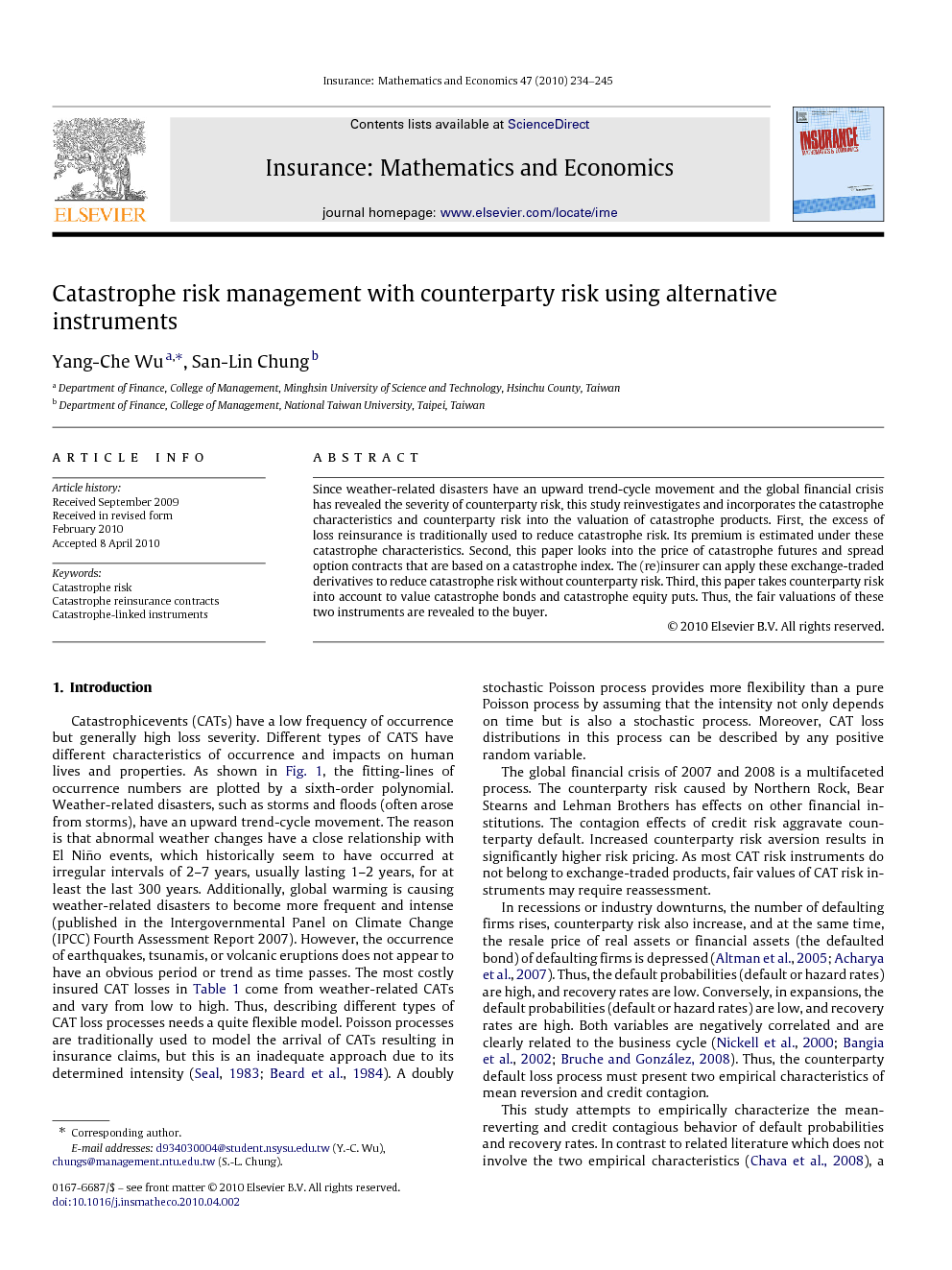 Catastrophic events (CATs) have a low frequency of occurrence but generally high loss severity. Different types of CATS have different characteristics of occurrence and impacts on human lives and properties. As shown in Fig. 1, the fitting-lines of occurrence numbers are plotted by a sixth-order polynomial. Weather-related disasters, such as storms and floods (often arose from storms), have an upward trend-cycle movement. The reason is that abnormal weather changes have a close relationship with El Niño events, which historically seem to have occurred at irregular intervals of 2–7 years, usually lasting 1–2 years, for at least the last 300 years. Additionally, global warming is causing weather-related disasters to become more frequent and intense (published in the Intergovernmental Panel on Climate Change (IPCC) Fourth Assessment Report 2007). However, the occurrence of earthquakes, tsunamis, or volcanic eruptions does not appear to have an obvious period or trend as time passes. The most costly insured CAT losses in Table 1 come from weather-related CATs and vary from low to high. Thus, describing different types of CAT loss processes needs a quite flexible model. Poisson processes are traditionally used to model the arrival of CATs resulting in insurance claims, but this is an inadequate approach due to its determined intensity (Seal, 1983 and Beard et al., 1984). A doubly stochastic Poisson process provides more flexibility than a pure Poisson process by assuming that the intensity not only depends on time but is also a stochastic process. Moreover, CAT loss distributions in this process can be described by any positive random variable. The global financial crisis of 2007 and 2008 is a multifaceted process. The counterparty risk caused by Northern Rock, Bear Stearns and Lehman Brothers has effects on other financial institutions. The contagion effects of credit risk aggravate counterparty default. Increased counterparty risk aversion results in significantly higher risk pricing. As most CAT risk instruments do not belong to exchange-traded products, fair values of CAT risk instruments may require reassessment. In recessions or industry downturns, the number of defaulting firms rises, counterparty risk also increase, and at the same time, the resale price of real assets or financial assets (the defaulted bond) of defaulting firms is depressed (Altman et al., 2005 and Acharya et al., 2007). Thus, the default probabilities (default or hazard rates) are high, and recovery rates are low. Conversely, in expansions, the default probabilities (default or hazard rates) are low, and recovery rates are high. Both variables are negatively correlated and are clearly related to the business cycle (Nickell et al., 2000, Bangia et al., 2002 and Bruche and González, 2008). Thus, the counterparty default loss process must present two empirical characteristics of mean reversion and credit contagion. This study attempts to empirically characterize the mean-reverting and credit contagious behavior of default probabilities and recovery rates. In contrast to related literature which does not involve the two empirical characteristics (Chava et al., 2008), a mean-reverting hazard rate process with contagion is developed to derive the default probability of counterparty risk. A combined model of default probability and recovery rates is thus obtained to describe expected default losses or residual value. Since the literature seldom simultaneously take mean reversion and credit contagion into the risk management and pricing model, this article uses the model to re-estimate catastrophe insurance contracts. The contributions of this paper are as follows. First, given the greater severity and frequency of CATs, this paper uses a more general doubly compound Poisson process instead of a traditional compound Poisson process to capture more characteristics of the CAT process. For different types of CATs, this process allows greater flexibility in incorporating various kinds of arrival rates with the various impacts of CATs on claims. Thus, the valuations of CAT insurance products are more theoretically appropriate and fair than those in the previous literature. Second, this paper offers a consistent pricing framework for CAT reinsurance contracts and three types of catastrophe-linked instruments, which transfer CAT risk to capital markets in different ways. Insurance practitioners can efficiently use these products to manage CAT risk. Third, as the global financial crisis and several big scandals have revealed the severity of counterparty risk, this study reinvestigates and incorporates this risk into the valuation of catastrophe reinsurance contracts and three types of catastrophe-linked instruments. The rest of the paper is organized as follows. Section 2 introduces CAT claim models and makes some assumptions about the CAT insurance market. This default risk and recovery rate of the counterparty are also modeled. Section 3 derives the premiums of CAT reinsurance contracts and the pricing formulas of three types of catastrophe-linked instruments with counterpart risk. A numerical experiment is carried out to show the price differences between the American-type CatEPut (with mean-reverting arrival rate, constant rate) and the European-type one. Section 4 compares the empirical result of the mean-reverting arrival rate with those of the constant arrival rate and the two-state regime-switching arrival rate. The evidence shows that the former is superior to the latter two. The conclusions are presented in Section 5.

Consider an upward trend-cycle movement of weather-related catastrophes and the severity of counterparty risk, this study reinvestigates and incorporates these catastrophic characteristics and counterparty risk into the valuation of catastrophe products. Empirical results show that a mean-reverting arrival rate captures the occurrence of catastrophe events better than the constant arrival rate and the regime-switching arrival rate. A doubly stochastic compound Poisson process with mean-reverting arrival rate is assumed to be the catastrophe loss process. Under a consistent pricing framework, this study derives the premiums of two kinds of reinsurance contracts and the pricing formula of CAT future call option. According to the actual contract specifications of CatEPut, the American-type CatEPut is more appropriate than the European-type one. The prices of the two options can be computed by the FST method and the non-negligible price difference means the premium of timely funds. Since both CAT bond and CatEPut are not exchange-traded derivatives and the lesson is caused by the global financial crisis and several big scandals, this article models the default risk and recovery rate of the counterparty and further derives the valuation with the counterparty risk of CAT bond and CatEPut. The analytical formulas in this work in fact provide a platform for further research on CAT losses with more sophisticated contracts and terms.