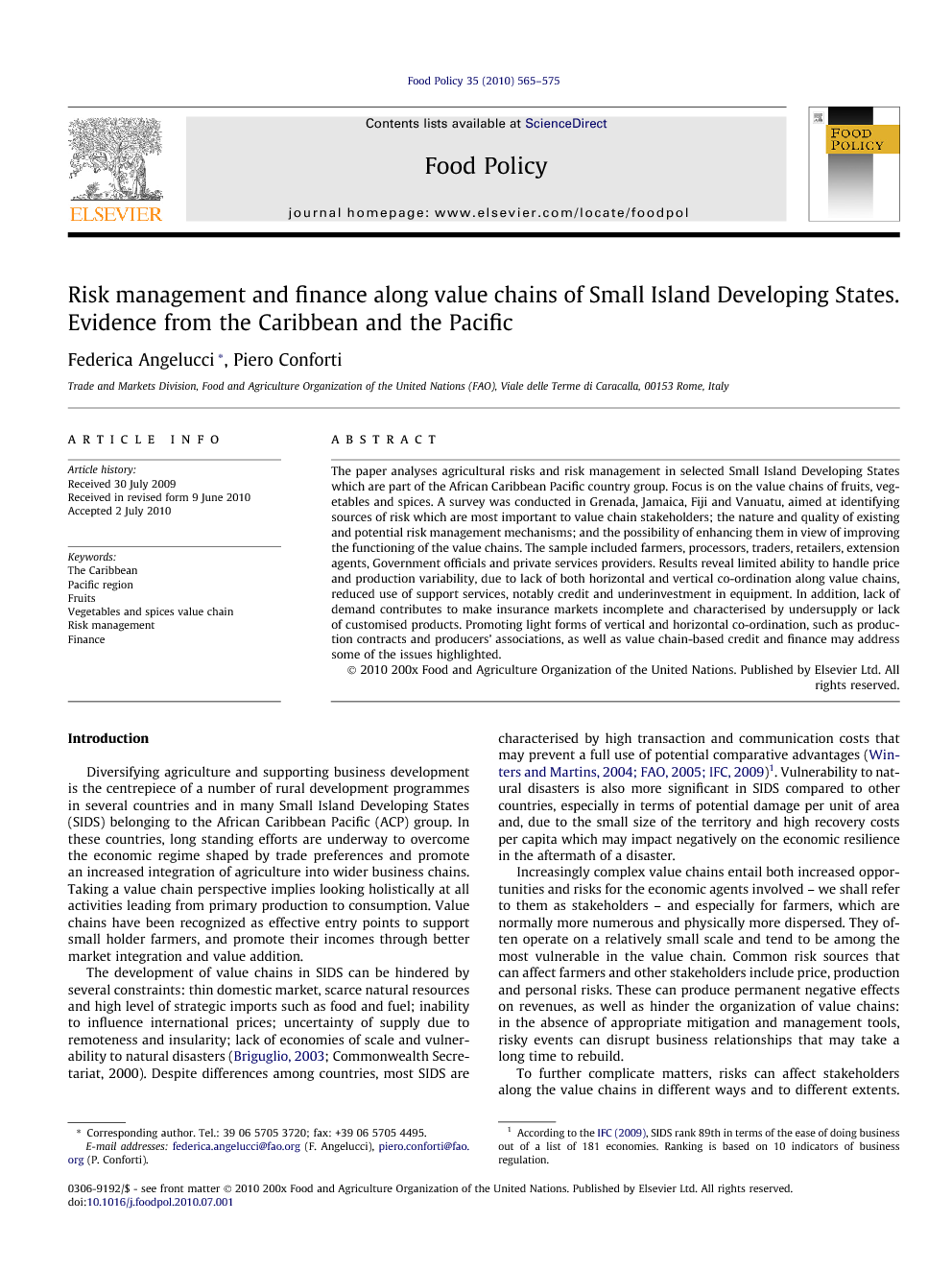 The paper analyses agricultural risks and risk management in selected Small Island Developing States which are part of the African Caribbean Pacific country group. Focus is on the value chains of fruits, vegetables and spices. A survey was conducted in Grenada, Jamaica, Fiji and Vanuatu, aimed at identifying sources of risk which are most important to value chain stakeholders; the nature and quality of existing and potential risk management mechanisms; and the possibility of enhancing them in view of improving the functioning of the value chains. The sample included farmers, processors, traders, retailers, extension agents, Government officials and private services providers. Results reveal limited ability to handle price and production variability, due to lack of both horizontal and vertical co-ordination along value chains, reduced use of support services, notably credit and underinvestment in equipment. In addition, lack of demand contributes to make insurance markets incomplete and characterised by undersupply or lack of customised products. Promoting light forms of vertical and horizontal co-ordination, such as production contracts and producers’ associations, as well as value chain-based credit and finance may address some of the issues highlighted.

Diversifying agriculture and supporting business development is the centrepiece of a number of rural development programmes in several countries and in many Small Island Developing States (SIDS) belonging to the African Caribbean Pacific (ACP) group. In these countries, long standing efforts are underway to overcome the economic regime shaped by trade preferences and promote an increased integration of agriculture into wider business chains. Taking a value chain perspective implies looking holistically at all activities leading from primary production to consumption. Value chains have been recognized as effective entry points to support small holder farmers, and promote their incomes through better market integration and value addition. The development of value chains in SIDS can be hindered by several constraints: thin domestic market, scarce natural resources and high level of strategic imports such as food and fuel; inability to influence international prices; uncertainty of supply due to remoteness and insularity; lack of economies of scale and vulnerability to natural disasters (Briguglio, 2003; Commonwealth Secretariat, 2000). Despite differences among countries, most SIDS are characterised by high transaction and communication costs that may prevent a full use of potential comparative advantages (Winters and Martins, 2004, FAO, 2005 and IFC, 2009)1. Vulnerability to natural disasters is also more significant in SIDS compared to other countries, especially in terms of potential damage per unit of area and, due to the small size of the territory and high recovery costs per capita which may impact negatively on the economic resilience in the aftermath of a disaster. Increasingly complex value chains entail both increased opportunities and risks for the economic agents involved – we shall refer to them as stakeholders – and especially for farmers, which are normally more numerous and physically more dispersed. They often operate on a relatively small scale and tend to be among the most vulnerable in the value chain. Common risk sources that can affect farmers and other stakeholders include price, production and personal risks. These can produce permanent negative effects on revenues, as well as hinder the organization of value chains: in the absence of appropriate mitigation and management tools, risky events can disrupt business relationships that may take a long time to rebuild. To further complicate matters, risks can affect stakeholders along the value chains in different ways and to different extents. A production loss experienced by farmers may not be a problem for processors, as long as they can source raw agricultural products elsewhere. In fact, value chains normally incorporate more or less formal and effective arrangements aimed at managing risks, which are also defined by the institutional environment. Policies too can be ultimately conceived as tools to manage risks, typical examples being protection, subsidies or price stabilisation for farmers. This paper aims at shedding light on risks and risk management mechanisms in selected SIDS which are part of the ACP country group. Specifically, those that are striving to diversify their agriculture, are switching from the traditional agricultural economy based on sugar and bananas, or that are driven by trade preferences, to the development of more complex value chains such as those based on other fruits, vegetables and spices. Reviewing risk management mechanisms was identified as an important element of this process. Participatory processes undertaken within the All ACP Agricultural Commodity Programme (AAACP), financed by the EU, highlighted that several difficulties encountered by farmers and other stakeholders in organizing production and marketing along value chains and maintaining organizations through time can be framed as risks, and possible solutions as risk management mechanisms. Consequently, an exploratory survey was organized on risks and risk management along value chains in selected SIDS countries. Primary information was collected in Grenada, Jamaica, Fiji and Vanuatu on risk considered in a broad sense, taking into account simultaneously elements that contribute to shape it along value chains. Policies and access to credit were considered as factors affecting farmers’ and other stakeholders’ ability to cope with expected price variability, along with technical capabilities, the availability of expertise and advice and the participation in associations, commodity groups and other more or less formal organizations. The next section offers a review of the basic concepts employed in the paper concerning risks and risk management along value chains, and discusses risk layering. The following section describes the survey and the methods applied to analyse the data collected, while the results of the analysis are illustrated in the fourth section. The last section concludes and discusses areas for further investigation and action.