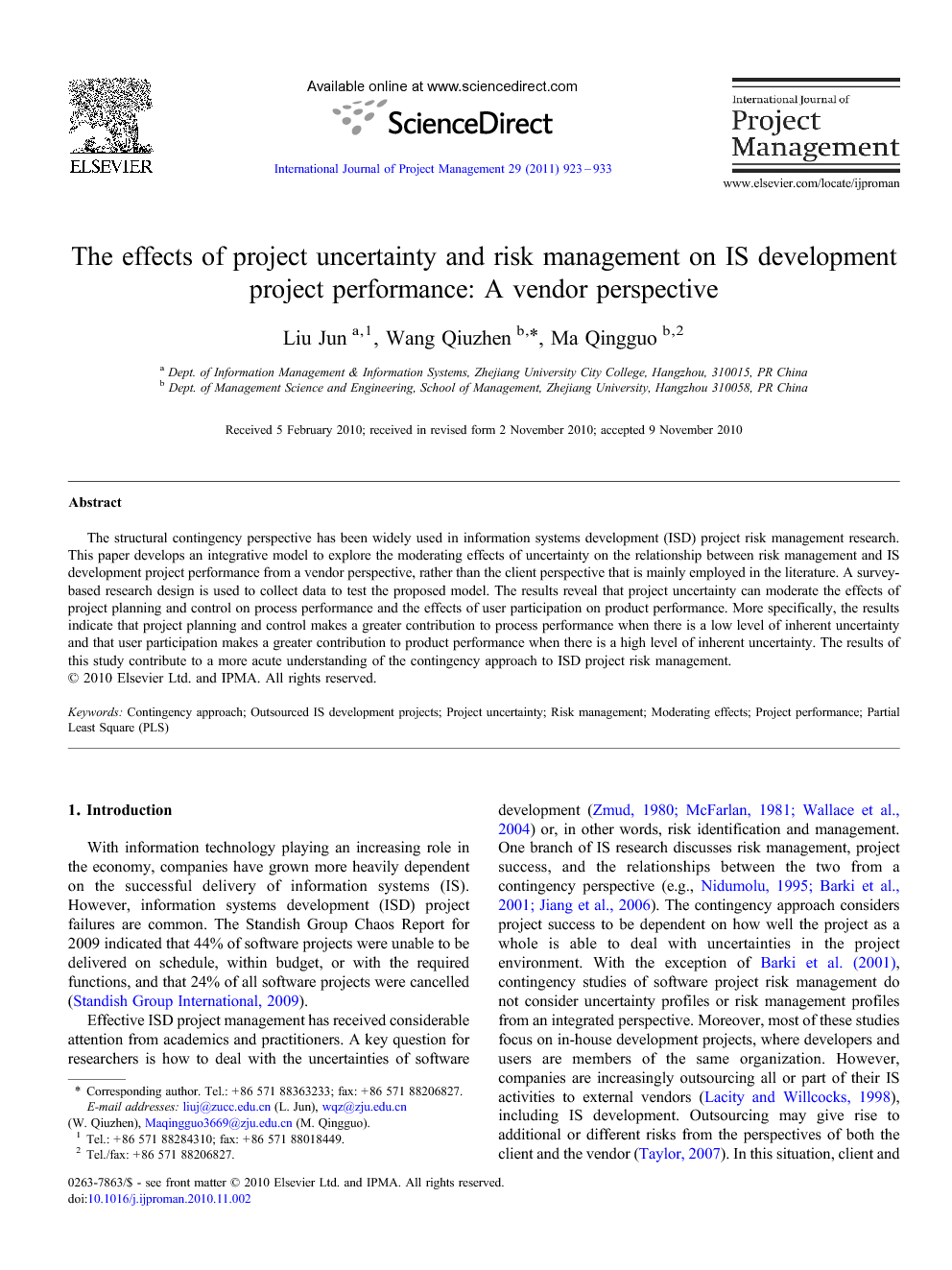 The structural contingency perspective has been widely used in information systems development (ISD) project risk management research. This paper develops an integrative model to explore the moderating effects of uncertainty on the relationship between risk management and IS development project performance from a vendor perspective, rather than the client perspective that is mainly employed in the literature. A survey-based research design is used to collect data to test the proposed model. The results reveal that project uncertainty can moderate the effects of project planning and control on process performance and the effects of user participation on product performance. More specifically, the results indicate that project planning and control makes a greater contribution to process performance when there is a low level of inherent uncertainty and that user participation makes a greater contribution to product performance when there is a high level of inherent uncertainty. The results of this study contribute to a more acute understanding of the contingency approach to ISD project risk management.

With information technology playing an increasing role in the economy, companies have grown more heavily dependent on the successful delivery of information systems (IS). However, information systems development (ISD) project failures are common. The Standish Group Chaos Report for 2009 indicated that 44% of software projects were unable to be delivered on schedule, within budget, or with the required functions, and that 24% of all software projects were cancelled (Standish Group International, 2009). Effective ISD project management has received considerable attention from academics and practitioners. A key question for researchers is how to deal with the uncertainties of software development (Zmud, 1980, McFarlan, 1981 and Wallace et al., 2004) or, in other words, risk identification and management. One branch of IS research discusses risk management, project success, and the relationships between the two from a contingency perspective (e.g., Nidumolu, 1995, Barki et al., 2001 and Jiang et al., 2006). The contingency approach considers project success to be dependent on how well the project as a whole is able to deal with uncertainties in the project environment. With the exception of Barki et al. (2001), contingency studies of software project risk management do not consider uncertainty profiles or risk management profiles from an integrated perspective. Moreover, most of these studies focus on in-house development projects, where developers and users are members of the same organization. However, companies are increasingly outsourcing all or part of their IS activities to external vendors (Lacity and Willcocks, 1998), including IS development. Outsourcing may give rise to additional or different risks from the perspectives of both the client and the vendor (Taylor, 2007). In this situation, client and vendor share the responsibilities for managing outsourced IS projects. As system vendors absorb considerable amounts of risk, an integrated framework is needed for managing the risk in software development from a vendor perspective (Dey et al., 2007). However, prior research on risk management in outsourced ISD projects has paid little attention to the vendor's perspective (Taylor, 2007). The two parties involved in outsourcing may have different perceptions of risk, risk management and project success because of the differences in their goals and structures. Accordingly, the contingency relationships found in prior research need to be examined to determine whether they also apply to the study of the outsourced projects from a vendor perspective. Thus, this paper attempts to develop an integrative contingency framework to describe the effects of project uncertainty, risk management and their interaction on project performance from the vendor's perspective. This paper is expected to advance our understanding of the risk management of outsourced IS development projects and to provide system vendors with a set of guidelines that may be helpful for the effective risk management of outsourced ISD projects. The remainder of this paper is organized as follows. The next section discusses the theoretical background to ISD project management and reviews the existing literature. Section 3 describes the research model and the resulting hypotheses. The research methodology and the results of our model test are reported in 4 and 5. Section 6 discusses the results and the implications of the study. The final section outlines the limitations to the study and the opportunities for further research.