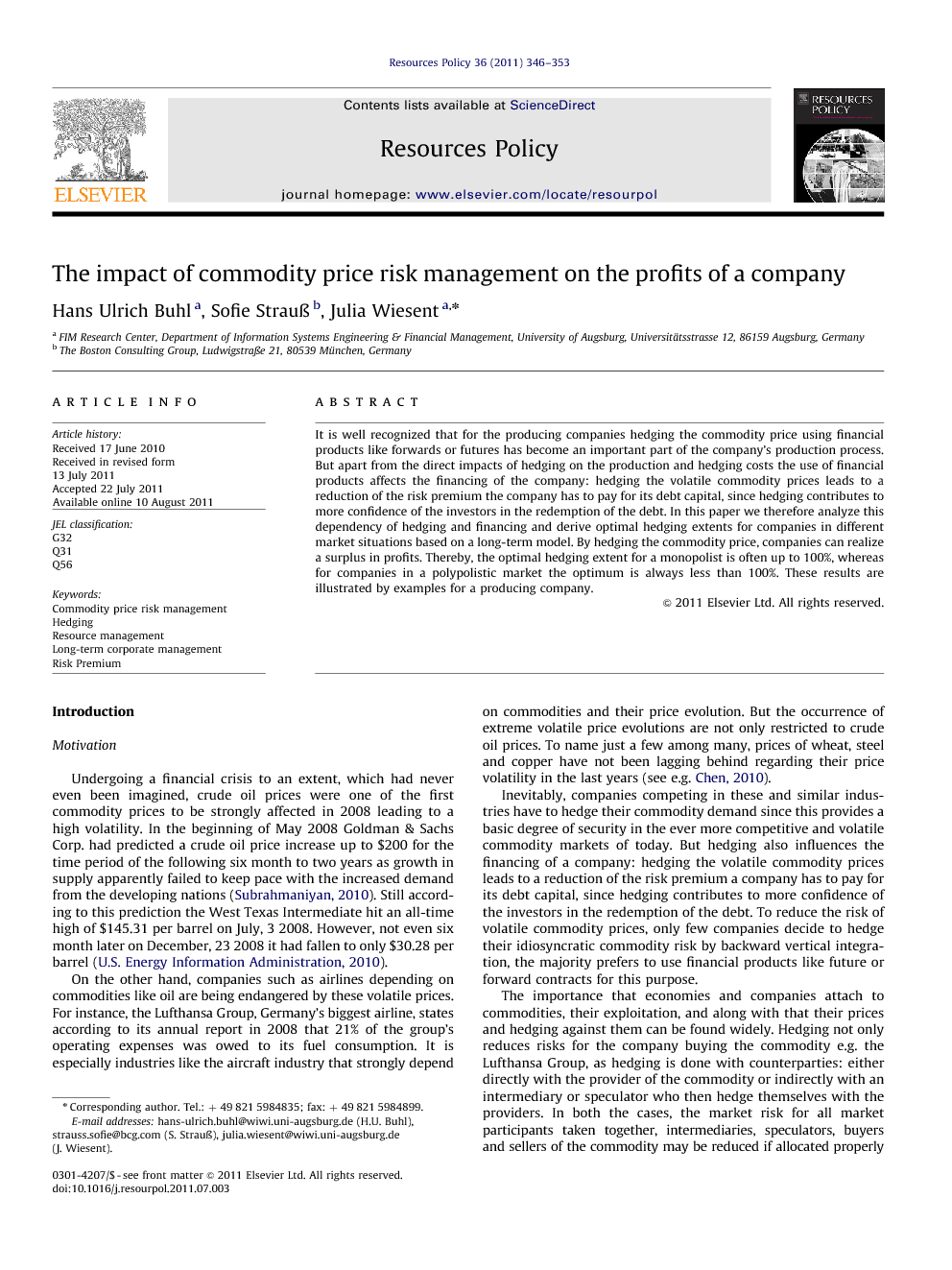 It is well recognized that for the producing companies hedging the commodity price using financial products like forwards or futures has become an important part of the company's production process. But apart from the direct impacts of hedging on the production and hedging costs the use of financial products affects the financing of the company: hedging the volatile commodity prices leads to a reduction of the risk premium the company has to pay for its debt capital, since hedging contributes to more confidence of the investors in the redemption of the debt. In this paper we therefore analyze this dependency of hedging and financing and derive optimal hedging extents for companies in different market situations based on a long-term model. By hedging the commodity price, companies can realize a surplus in profits. Thereby, the optimal hedging extent for a monopolist is often up to 100%, whereas for companies in a polypolistic market the optimum is always less than 100%. These results are illustrated by examples for a producing company.

In this paper we analyzed the profit of a risk neutral company with regard to a long term hedging extent, where hedging contributes to less fluctuation and so to better predictable commodity markets. We scrutinized the impact of several different quantifiable factors that influence the decision of the hedging extent: the type of market a company was trading its own products in and the type of market it was satisfying its commodity demand in, the access of the company to financial services, the importance of commodities to the company and the risk aversion towards the public perception of being a speculative company. While the evolved model focuses on these factors, it does not account for currency issues and varying tax systems, which have to be included into a financial analysis as well. Another interesting research area can be the analysis of short term price evolutions in a competitive market where a company faces direct competitors that also use the instrument of hedging. However, in this paper we demonstrated how all the factors listed above led to a long term optimal hedging extent and thus to a surplus in profits depending on particular market situations and a more stable commodity market for all market participants. In the basic model of a monopolist we showed how the expected reduction in the risk premium of the newly issued capital and the way it was reduced could realize a surplus in profits, for instance $129,152 in the illustrated example for the monopolist. While this added to the advantageousness of hedging, the costs involved with hedging resulted in a downside of hedging. Once the risk premium reduction preponderated, we often obtained marginal solutions of 100% as the optimal hedging extent. However, this changed when considering a polypolistic market of the company's product. The volatile demand for the company's product and along with that the volatile demand for the commodity led to the possibility of being overhedged. In order to circumvent this we introduced an upper restriction to the hedging extent. In the given example this restriction evoked a reduction of the optimal hedging extent from 100% to 98.4%. In conclusion we can state that the long term optimal hedging extent evolved in this paper helps the company to plan and organize its current and future expenses for the following business periods. As speculation is reduced, the model helps to contribute to a more stable demand of the underlying commodity in general. Thus, market participants including the provider and the buyer of the commodity as well as the commodity industries and economics profit from hedging the commodity price. This adds in the end to a positive and sustainable influence on the environment, since, for example, the exploitation of non-renewable resources like oil or iron ore can be managed and planned with less risk involved.