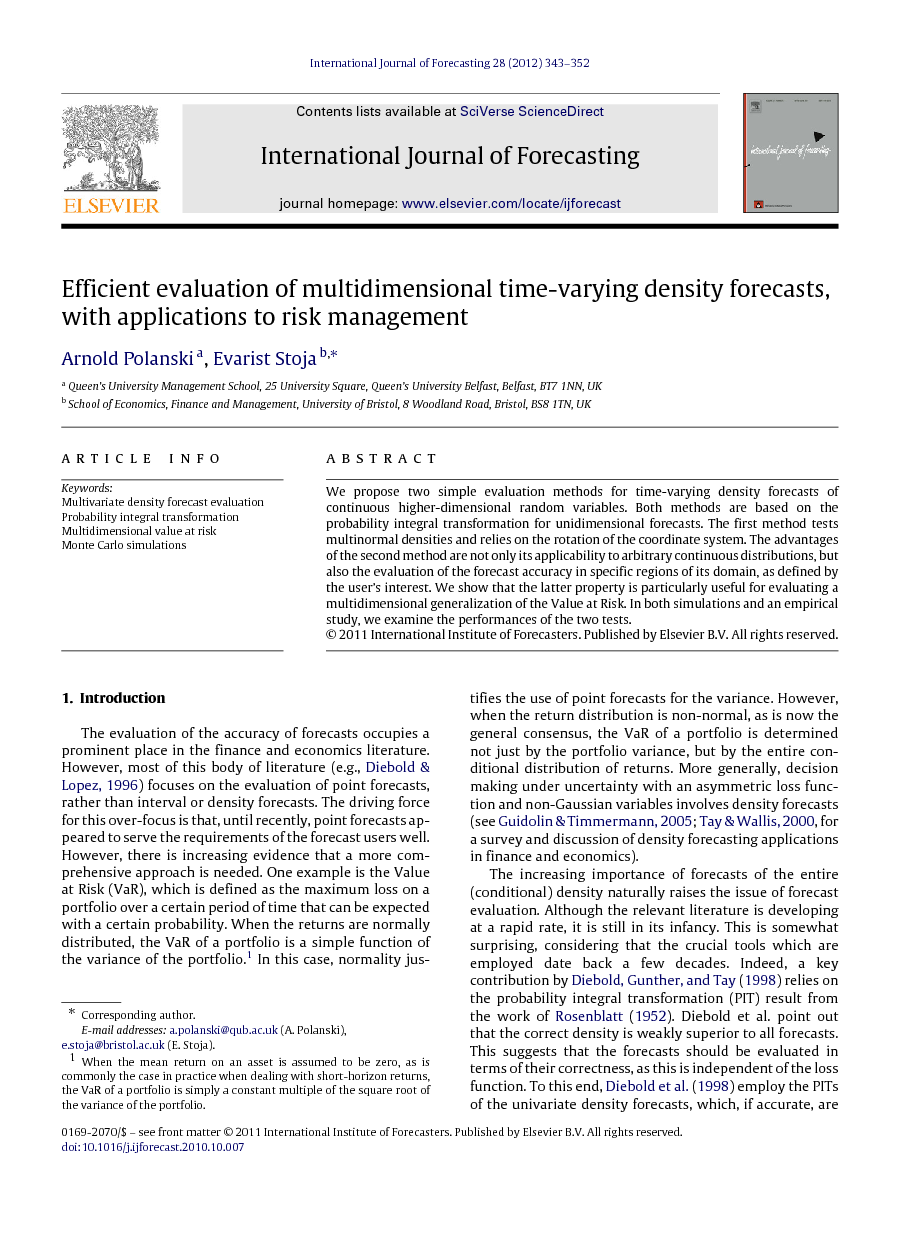 We propose two simple evaluation methods for time-varying density forecasts of continuous higher-dimensional random variables. Both methods are based on the probability integral transformation for unidimensional forecasts. The first method tests multinormal densities and relies on the rotation of the coordinate system. The advantages of the second method are not only its applicability to arbitrary continuous distributions, but also the evaluation of the forecast accuracy in specific regions of its domain, as defined by the user’s interest. We show that the latter property is particularly useful for evaluating a multidimensional generalization of the Value at Risk. In both simulations and an empirical study, we examine the performances of the two tests.

The focus of the forecasting literature has recently shifted to interval and density forecasting. This shift has been motivated by applications in finance and economics, as well as by the realization that density and interval forecasts convey more information than point forecasts. Density forecasts naturally raise the question of evaluation. While efficient evaluation techniques for the univariate case have developed rapidly, the literature on multivariate density forecast evaluation remains limited. Indeed, the Diebold et al. (1999) PIT test remains the main reference, with extensions having been proposed by Clements and Smith, 2000 and Clements and Smith, 2002. One drawback of these approaches is that they rely on the PDF factorization into conditionals and marginals, which may prove challenging even for simple functions. In this paper, we provide flexible and intuitive alternative tests of the multivariate forecast accuracy that rely on the univariate PIT idea and avoid the cumbersome decomposition into conditionals and marginals. The framework is particularly important for examining the multiple sources of tail risk encapsulated in MVaR. We performed Monte Carlo simulations and an empirical case study that demonstrated the application of both procedures. Finally, regarding the sources of forecast errors, we expect the parameter estimation uncertainty to be of secondary importance relative to dynamic misspecification (Chatfield, 1993). However, shedding light on the power of the proposed test in the presence of forecast inaccuracy requires a formal investigation, which may suggest a possible avenue for future research.