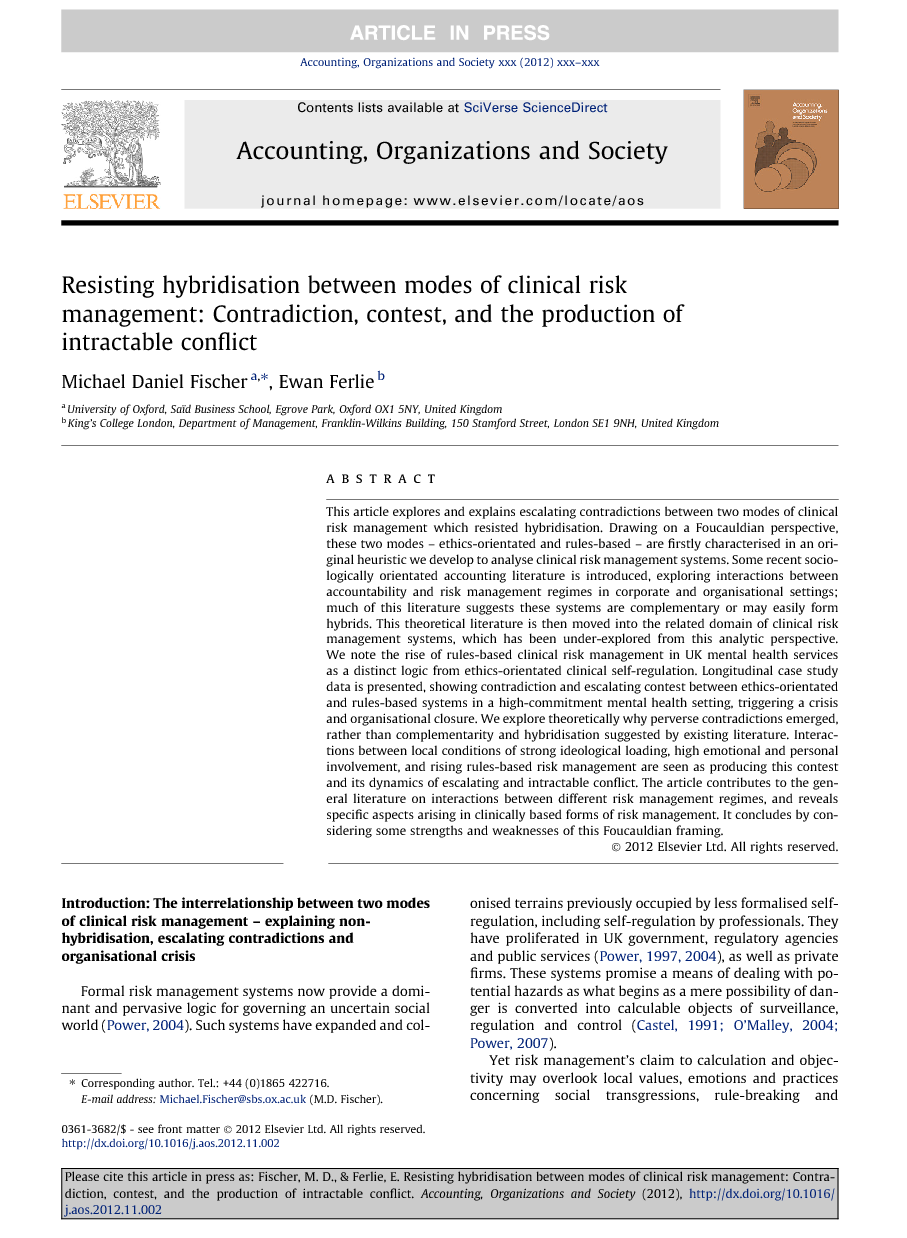 Formal risk management systems now provide a dominant and pervasive logic for governing an uncertain social world (Power, 2004). Such systems have expanded and colonised terrains previously occupied by less formalised self-regulation, including self-regulation by professionals. They have proliferated in UK government, regulatory agencies and public services (Power, 1997 and Power, 2004), as well as private firms. These systems promise a means of dealing with potential hazards as what begins as a mere possibility of danger is converted into calculable objects of surveillance, regulation and control (Castel, 1991, O’Malley, 2004 and Power, 2007). Yet risk management’s claim to calculation and objectivity may overlook local values, emotions and practices concerning social transgressions, rule-breaking and deviancy. For instance, by putting individuals’ selves and feelings ‘at risk’, formal risk systems may involve ‘cleaning-up’ accounts for presentation to external auditors; they may encourage individuals to hide malpractice, ‘game’ reporting systems and undermine corrective learning (Gabe et al., 2012, Iedema et al., 2006 and Waring, 2009; McGivern and Ferlie, 2007 and McGivern and Fischer, 2012). Risk may function above all as a moral idea in which the selection, handling and elaboration of risk functions to protect authoritative moral orders and risk management regimes meant to uphold them (Douglas, 1992). According to this ‘risk as moral government’ perspective, risks are not ontological facts, but social constructions where omissions, wrong-doing and blame are attributable to persons held accountable ( Douglas, 1992 and Luhmann, 1993). If formal risk management systems operate as a form of moral government, they may also interact with indigenous risk practices and mentalities as individuals orientate themselves towards authoritative, external evaluations of their conduct (Ericson and Doyle, 2003, Ewald, 1991, Power, 2004 and Power, 2009a). According to Foucault’s (1979) original concept of governmentality, such an orientation towards risk may lead to an internalisation and strengthening of its rationalities, whether through compliance, participation, or even resistance (Gordon, 1991). But what are the empirical dynamics of interactions between ‘indigenous’ risk management practices and formal risk management systems? Within the sociologically orientated accounting literature, recent scholarship indicates manageable tensions (Gendron, 2002 and Rahaman et al., 2010), complementarity (Roberts, 1991) and ready hybridisation (Miller, Kurunmäki, & O’Leary, 2008) between different accountability and risk management regimes. By contrast, Armstrong (1994) suggests some potential contradictions arising between different discursive systems. Yet overall, this literature does not suggest conflictual interactions between formal risk management and indigenous risk management systems. In contrast to this literature, we argue that interactions between alternative risk management systems may exert perverse and intractable effects, not previously adequately considered. Drawing on Foucault, 2010 and Foucault, 2011 recently published final lectures at the College de France, we develop an original heuristic to explore interactions between a rules-based mode of regulation, advanced by formal risk management systems, and a contrasting ethics-orientated mode more embedded in indigenous clinical practices. Whereas Foucault (1992: 25) defined morality as a ‘systematic ensemble’ of values and rules of conduct presecribed to individuals through authoritative institutions, he contrasted these rules-based ‘moral codes’ with the different ways in which individuals might interpret and relate to them. Individuals may not merely conform to rules, but seek to constitute themselves as ‘ethical subjects’ through practices intended to transform their thoughts, emotions, and ways of being. We apply our heuristic in an empirical case of a high-commitment health care organisation where perverse interactions between contrasting modes of risk regulation are exemplified. Through a longitudinal case study of a mental health care setting – a Democratic Therapeutic Community (DTC) – we explore dynamics between rising formal clinical risk management systems and pre-existing self-regulation, clinically embedded. Whereas interactions between these modes are likely to be important in a number of settings, we propose the DTC may be an ‘extreme case’ (Eisenhardt, 1989) human service organisation, well-suited for studying these interactions that may be less apparent in other settings. Contrary to much literature, this case reveals strong tension between the two modes of regulation, leading to escalating morally-charged conflict which ultimately, we suggest, triggers a crisis and organisational closure. Our article contributes to the sociological accounting literature, firstly, by elucidating perverse interactions between formal risk management systems and indigenous risk management practices. Secondly, we develop a sociological perspective on a related field of clinical risk management systems. Some sociologically orientated accounting literature examines corporate and financial accountability or risk management systems, including some health care settings ( Miller et al., 2008, Miller and Rose, 2008 and Rahaman et al., 2010). We apply these perspectives to the particular domain of clinical risk management. As clinical risk management involves significant first order risks (mainly to service users and clinicians), as well as second order, reputational risks (particularly to managers and organisations, see Power, 2007), we suggest this context reveals some perverse interactions, previously overlooked. The argument proceeds as follows. Firstly, we introduce our Foucauldian heuristic, situating the discussion theoretically in the sociologically orientated accounting literature on interactions between regulatory regimes. The growth of formal clinical risk management systems in UK mental health services is outlined and we introduce the DTC as a distinctive clinical setting. We then describe our ethnographic research design and empirical case study, revealing escalating tensions between self-regulatory practices and a rising formal risk management system. We find contradictions, contest, and no easy hybridisation. These findings are discussed theoretically in relation to our heuristic. We conclude by considering the strengths and weaknesses of the Foucauldian framing adopted, and suggest ideas for further study of interactions between risk management regimes.

We suggest the homicide can be seen as a critical incident that precipitated a collision between ethics-orientated and rules-based modes of clinical risk management. Interagency tensions over accountability and blame for this incident shifted rules-based clinical risk management from a background resource to an alternative truth regime, proposed, suggested, and imposed (Foucault, 1996) by worried managers and commissioners. As Kosmala and McKernan (2010) argue, ethics-orientated regulation is never entirely separate from rules-based forms; the balance between them is dynamic and tends to vary between different epochs. Nevertheless, rules-based regulation may remain a background social framework. In our empirical case, the pre-incident DTC had drawn upon, re-interpreted, and assimilated into its ethics-orientated clinical risk management certain external codes, notably adapting some principles of the Care Programme Approach (as described below). But authorities’ increased involvement with the community and its ‘inner life’ brought into play contradictory truth discourses about how risks should be constructed, identified and handled. Clashes arose not just over substantive clinical risks (notably, sexual relations, drugs and alcohol use), but second order risks of reputation and performance (Power, 2007), important in NHS regulation systems. So how did these competing ‘truth regimes’ interact? In contrast to much of the literature reviewed earlier, we find the development of escalating contest and contradictions with two key effects: firstly, erosion of the ethical basis of self-regulation and secondly, the developmemt of intractable conflict. Imposing rules-based ideals undermined valued aspects of therapeutic relations and eroded staff and residents’ shared commitment to an ethics-orientated mode of self-regulation. This did not, however, lead to rules-based clinical risk management becoming dominant. As parties’ various efforts to steer risk management practices and decision making became mutually mistrusted, the community’s carefully ‘negotiated order’ (Strauss, Schatzman, Bucher, Ehrlich, & Sabshin, 1964) was disrupted. In its place, overt (and covert) contest between conflicting notions of clinical risk management interacted perversely, eroding moral authority and undermining members’ trust in the DTC as a ‘safe and therapeutic space’. Contradictory practices: Non-hybridising, but conflicting modes The DTC’s indigenous clinical risk management practices had developed gradually through a participative method involving deep relational engagement, reflecting on shared experience, and collective decision-making. These practices were relatively well defined, tended to be internally coherent, and they were strongly embedded within the community. Furthermore, they were tied to a set of ethics-orientated principles that promoted therapeutic meaning and interpretation. In the charged and risk averse policy environment following the homicide, certain DTC practices such as democratisation (residents’ influence in democratic decision-making), permissiveness (privileging experiential learning over strict adherence to rules) and communalism (care plans based on relationship building, rather than administration) came to be regarded as inherently risky and in need of urgent reform. Indications of inadequate discharge planning triggered interventions from the host NHS Trust and national commissioners who imposed statutory NHS clinical risk management practices, minimising scope for local interpretation. These introduced rules-based practices were experienced, though, not as neutral ‘technologies’ (Miller & Rose, 2008), but morally laden and designed to attribute blame and punishment. Demands that DTC staff should monitor, record and report resident activities – and that residents should ‘confess’ intimate relations, report illicit drug taking, and allow examination of bodies through substance testing – were experienced as authorities’ efforts to control and dominate ‘subjects of risk … debris of pathology’ (senior therapist). Clinical risk management practices thus became aligned with deeply held and contested positions. Whereas heterogeneous practices certainly mixed in the DTC’s post-incident phase, instead of the complementarity (Roberts, 2001), managed tension, (Gendron, 2002 and Rahaman et al., 2010) or hybridisation and proliferation of practices (Miller et al., 2008) noted by other scholars, we find clinical risk management techniques were used as devices by parties seeking to control and outmanoeuvre each other. Through intensifying their use of rules-based codes, for example, DTC leaders attempted to weaken residents’ – and some staff members’ – engagement in the embedded ethics-orientated regime (through which they could democratically outvote DTC leadership). Conversely, residents’ anger at what they experienced as ‘untrustworthy’ attempts by DTC staff to take control stimulated a strongly politicised response amongst residents who became increasingly engaged in challenging, subverting and overtly refusing hierarchical authority. In relation to our Foucauldian framing, the DTC’s original ethics-orientation may be seen as later developing an ‘agonistic exteriority’ to domination (Foucault, 2011), in which residents’ outspokenness, self-determination, and opposition to authority became central.