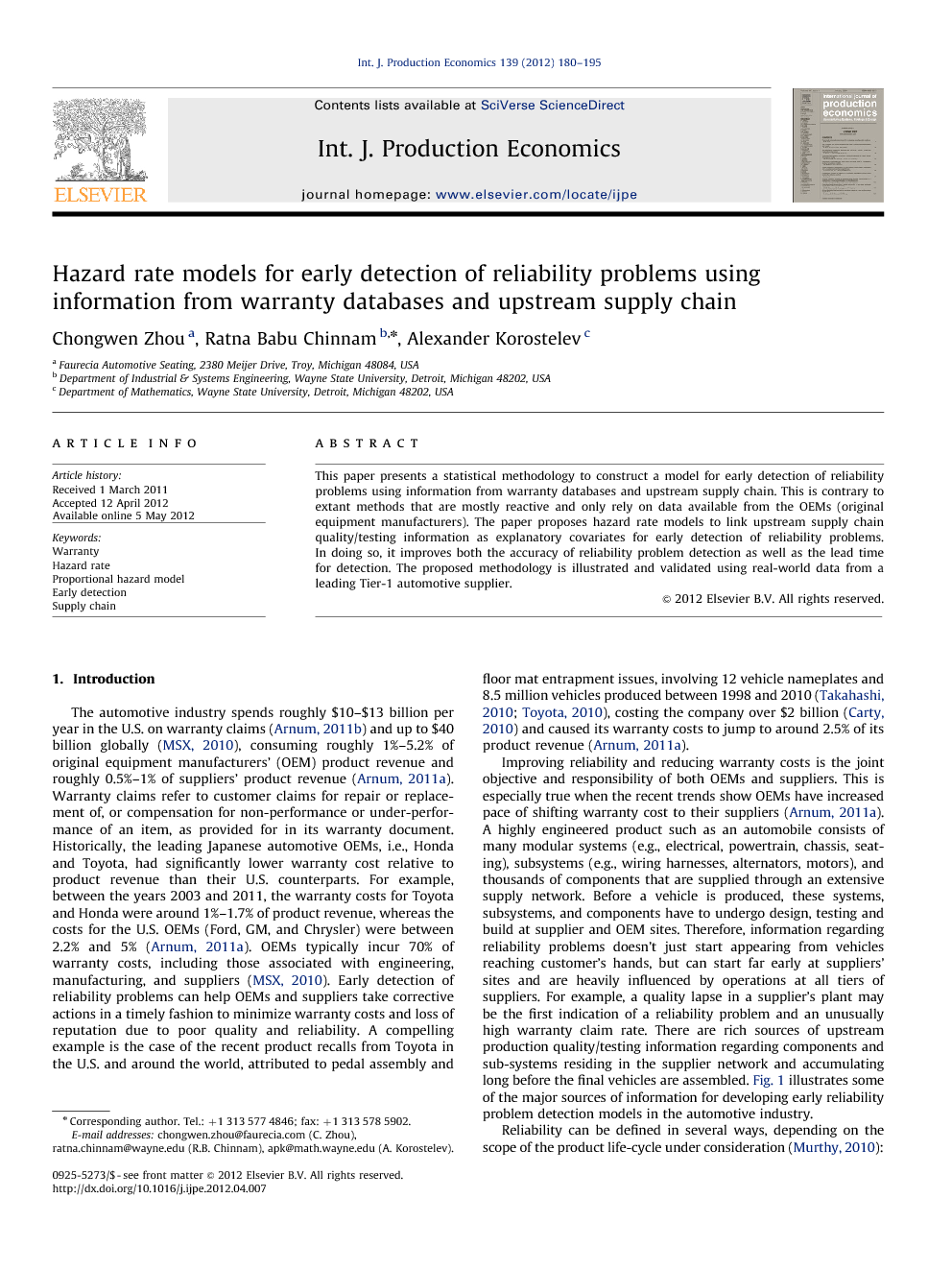 This paper presents a statistical methodology to construct a model for early detection of reliability problems using information from warranty databases and upstream supply chain. This is contrary to extant methods that are mostly reactive and only rely on data available from the OEMs (original equipment manufacturers). The paper proposes hazard rate models to link upstream supply chain quality/testing information as explanatory covariates for early detection of reliability problems. In doing so, it improves both the accuracy of reliability problem detection as well as the lead time for detection. The proposed methodology is illustrated and validated using real-world data from a leading Tier-1 automotive supplier.

The automotive industry spends roughly $10–$13 billion per year in the U.S. on warranty claims (Arnum, 2011b) and up to $40 billion globally (MSX, 2010), consuming roughly 1%–5.2% of original equipment manufacturers' (OEM) product revenue and roughly 0.5%–1% of suppliers' product revenue (Arnum, 2011a). Warranty claims refer to customer claims for repair or replacement of, or compensation for non-performance or under-performance of an item, as provided for in its warranty document. Historically, the leading Japanese automotive OEMs, i.e., Honda and Toyota, had significantly lower warranty cost relative to product revenue than their U.S. counterparts. For example, between the years 2003 and 2011, the warranty costs for Toyota and Honda were around 1%–1.7% of product revenue, whereas the costs for the U.S. OEMs (Ford, GM, and Chrysler) were between 2.2% and 5% (Arnum, 2011a). OEMs typically incur 70% of warranty costs, including those associated with engineering, manufacturing, and suppliers (MSX, 2010). Early detection of reliability problems can help OEMs and suppliers take corrective actions in a timely fashion to minimize warranty costs and loss of reputation due to poor quality and reliability. A compelling example is the case of the recent product recalls from Toyota in the U.S. and around the world, attributed to pedal assembly and floor mat entrapment issues, involving 12 vehicle nameplates and 8.5 million vehicles produced between 1998 and 2010 (Takahashi, 2010 and Toyota, 2010), costing the company over $2 billion (Carty, 2010) and caused its warranty costs to jump to around 2.5% of its product revenue (Arnum, 2011a). Improving reliability and reducing warranty costs is the joint objective and responsibility of both OEMs and suppliers. This is especially true when the recent trends show OEMs have increased pace of shifting warranty cost to their suppliers (Arnum, 2011a). A highly engineered product such as an automobile consists of many modular systems (e.g., electrical, powertrain, chassis, seating), subsystems (e.g., wiring harnesses, alternators, motors), and thousands of components that are supplied through an extensive supply network. Before a vehicle is produced, these systems, subsystems, and components have to undergo design, testing and build at supplier and OEM sites. Therefore, information regarding reliability problems doesn't just start appearing from vehicles reaching customer's hands, but can start far early at suppliers' sites and are heavily influenced by operations at all tiers of suppliers. For example, a quality lapse in a supplier's plant may be the first indication of a reliability problem and an unusually high warranty claim rate. There are rich sources of upstream production quality/testing information regarding components and sub-systems residing in the supplier network and accumulating long before the final vehicles are assembled. Fig. 1 illustrates some of the major sources of information for developing early reliability problem detection models in the automotive industry.Reliability can be defined in several ways, depending on the scope of the product life-cycle under consideration (Murthy, 2010): design reliability, inherent reliability (accounting for manufacturing and assembly errors), reliability at sale (accounting for damage during transportation and storage), and field reliability (accounting of customer usage behavior and environment). It is noted in the literature that the percentage of warranty claims due to human factors (such as user misuse, neglect, fraud or lack of training on product operation) in the field can be as large as 10% (Wu, 2011). However, this type of information is not readily available in several industries including the automotive, and in particular, not for Tier-1 and upstream suppliers. It is also true that not all warranty claims might stem from a reliability problem and not all failed items lead to a claim. However, warranty claim codes (that identify the reason for the claim and type of warranty work performed) allow us to make a strong connection. Hence, warranty claims can be used as surrogate indicators of product reliability. If the upstream information from the OEM and the supply chain can be utilized in a statistical framework to correlate to reliability problems indirectly through warranty claims, the power of an early reliability problem detection model should improve. Such an early warning system can also be used to monitor the effectiveness of corrective actions. While there is a growing body of literature on warranty modeling and forecasting, to the best of our knowledge, there is no model in the literature that explicitly links information from the supplier network to improve early reliability problem detection. The primary contribution of this manuscript is the introduction of a statistical modeling framework that explicitly utilizes upstream supply chain information from suppliers to not only allow early detection of reliability problems indirectly through warranty claims monitoring but also to aid in predicting the warranty claim rates. By utilizing hazard rate models, upstream supply chain quality/testing information is directly linked to expected warranty claims as explanatory covariates to achieve this goal. This research is from a supplier's point of view, and hence focuses more on linking warranty claim rates to design and inherent reliability problems. This upstream supply chain information is readily available to suppliers. As stated earlier, information from the field regarding customer usage behavior and environment is not available in several industries including the automotive, in particular for suppliers. However, the statistical modeling framework from this research can be extended to include any available and relevant sale/field reliability information as explanatory covariates. While much of this research focuses on application of the proposed reliability problem detection models to the automotive industry, the models are also relevant to other industries that rely on a supply network to build parts of the product. The rest of this paper is organized as follows. Section 2 reviews relevant literature. Section 3 describes the structure of suppliers' manufacturing and quality/testing data sources that might be indicative of reliability problems, and in turn, future warranty claims. Section 4 outlines the proposed methodology of utilizing hazard rate models to correlate upstream data sources to warranty claims. Section 5 develops an enhanced early reliability problem detection scheme by incorporating upstream suppliers' quality/testing data. Section 6 reviews the performance of the proposed method through a case study. Section 7 provides summary remarks and directions for further study.

Early detection of reliability problems can significantly aid companies reduce the associated warranty costs and improve customer satisfaction and brand image. Early reliability problem detection is a challenge when we deal with highly engineered products such as automobiles that involve complex and global supply chains and operations. Extant methods are mostly reactive and often rely only on data available from original equipment manufacturers (OEMs). Even these models do not try to explicitly link warranty claims to capability of manufacturing/assembly processes. This paper presents a statistical methodology to construct an early reliability problem detection model by monitoring claims using upstream supply chain information. The paper proposes hazard rate models to link upstream supply chain quality/testing information as explanatory covariates for early detection of reliability problems. In doing so, it improves both the accuracy of reliability problem detection as well as the lead time for detection. The proposed methodology is illustrated and validated using real-world data from a leading Tier-1 automotive supplier. Future work can target further testing the proposed models using warranty data sources from other systems, products, and industries. As the proposed models are from a supplier's point of view, focus is mostly on linking warranty claim rates to design and inherent reliability. Information from the field regarding customer usage behavior and environment is not available in several industries including the automotive, in particular for suppliers. However these factors can be important factors impacting warranty claims; for example, the percentage of warranty claims due to user behavior can be as large as 10% (Wu, 2011). If the levels of heterogeneity for these factors are high over production periods, the models can be extended to account for those heterogeneities. If these factors can be transformed to explanatory covariates, for example, vehicles can be segmented as qualitative covariates by sold geographic region such as Northeast, Midwest, South and West in US to account for heterogeneity of operating environment; by sold country to account for heterogeneity of customer behavior; by sold type such as retail and fleet to account for heterogeneity of usage mode/intensity, by transportation route to account for heterogeneity of transportation/storage, they can be incorporated into the proposed models as additional covariates which can further improve the detection power of the proposed models. Frailty models are also candidates to model hazard rates in the presence of over-dispersion or group-specific random effects (Glidden and Vittinghoff, 2004). The latter are distinguished from the former by the term “shared” frailty models. Unfortunately, such data is not currently available to suppliers from OEM warranty databases. As for future work, the proposed models should be extended to account for the warranty claim judgments of subject matter experts (e.g., opinions of product development engineers regarding design changes) and information from Tier-2 and further upstream suppliers. Suppliers that supply systems for multiple OEMs should also be able to exploit warranty claims information from multiple OEM customers.