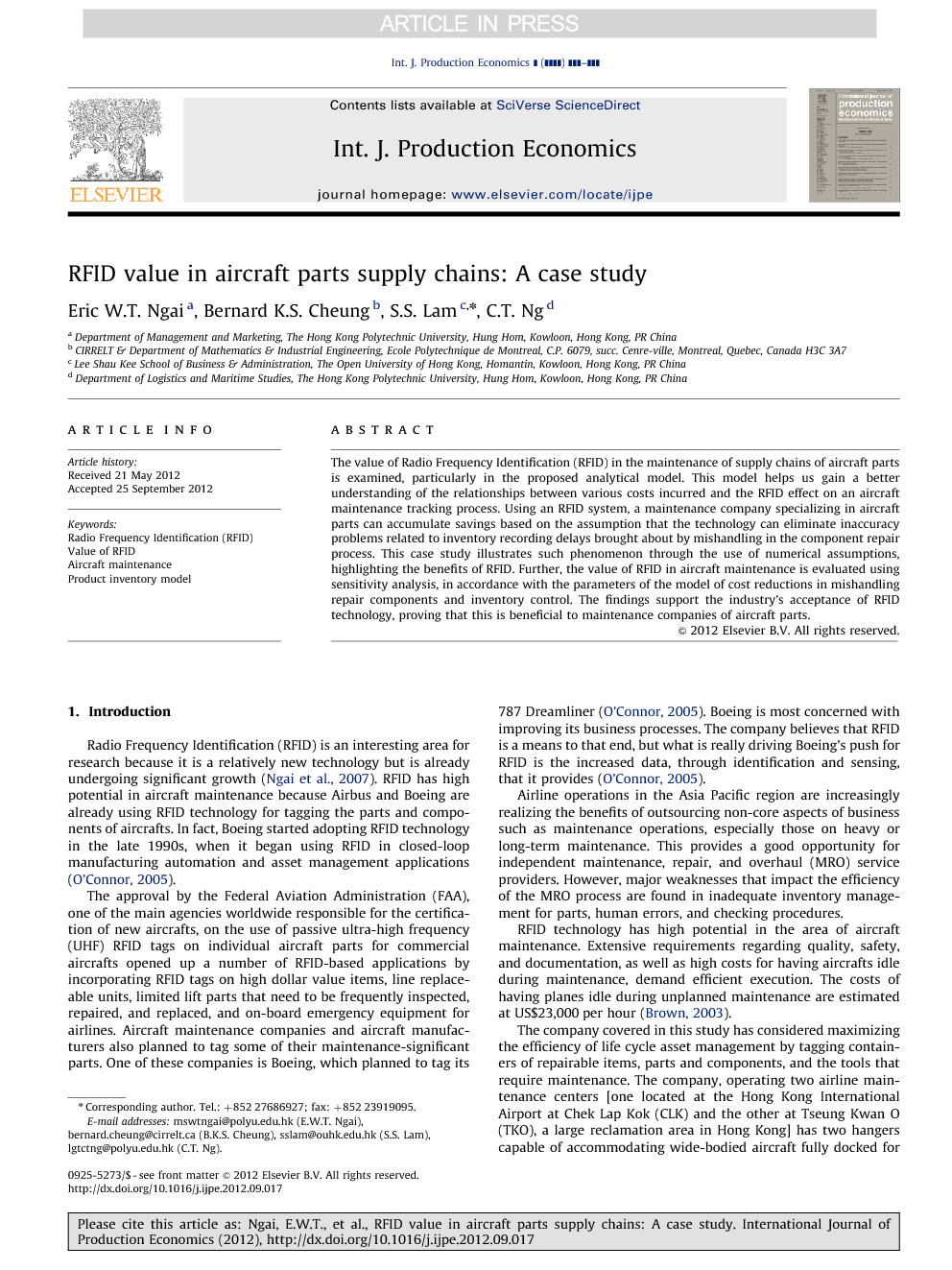 The value of Radio Frequency Identification (RFID) in the maintenance of supply chains of aircraft parts is examined, particularly in the proposed analytical model. This model helps us gain a better understanding of the relationships between various costs incurred and the RFID effect on an aircraft maintenance tracking process. Using an RFID system, a maintenance company specializing in aircraft parts can accumulate savings based on the assumption that the technology can eliminate inaccuracy problems related to inventory recording delays brought about by mishandling in the component repair process. This case study illustrates such phenomenon through the use of numerical assumptions, highlighting the benefits of RFID. Further, the value of RFID in aircraft maintenance is evaluated using sensitivity analysis, in accordance with the parameters of the model of cost reductions in mishandling repair components and inventory control. The findings support the industry's acceptance of RFID technology, proving that this is beneficial to maintenance companies of aircraft parts.

Radio Frequency Identification (RFID) is an interesting area for research because it is a relatively new technology but is already undergoing significant growth (Ngai et al., 2007). RFID has high potential in aircraft maintenance because Airbus and Boeing are already using RFID technology for tagging the parts and components of aircrafts. In fact, Boeing started adopting RFID technology in the late 1990s, when it began using RFID in closed-loop manufacturing automation and asset management applications (O’Connor, 2005). The approval by the Federal Aviation Administration (FAA), one of the main agencies worldwide responsible for the certification of new aircrafts, on the use of passive ultra-high frequency (UHF) RFID tags on individual aircraft parts for commercial aircrafts opened up a number of RFID-based applications by incorporating RFID tags on high dollar value items, line replaceable units, limited lift parts that need to be frequently inspected, repaired, and replaced, and on-board emergency equipment for airlines. Aircraft maintenance companies and aircraft manufacturers also planned to tag some of their maintenance-significant parts. One of these companies is Boeing, which planned to tag its 787 Dreamliner (O’Connor, 2005). Boeing is most concerned with improving its business processes. The company believes that RFID is a means to that end, but what is really driving Boeing's push for RFID is the increased data, through identification and sensing, that it provides (O’Connor, 2005). Airline operations in the Asia Pacific region are increasingly realizing the benefits of outsourcing non-core aspects of business such as maintenance operations, especially those on heavy or long-term maintenance. This provides a good opportunity for independent maintenance, repair, and overhaul (MRO) service providers. However, major weaknesses that impact the efficiency of the MRO process are found in inadequate inventory management for parts, human errors, and checking procedures. RFID technology has high potential in the area of aircraft maintenance. Extensive requirements regarding quality, safety, and documentation, as well as high costs for having aircrafts idle during maintenance, demand efficient execution. The costs of having planes idle during unplanned maintenance are estimated at US$23,000 per hour (Brown, 2003). The company covered in this study has considered maximizing the efficiency of life cycle asset management by tagging containers of repairable items, parts and components, and the tools that require maintenance. The company, operating two airline maintenance centers [one located at the Hong Kong International Airport at Chek Lap Kok (CLK) and the other at Tseung Kwan O (TKO), a large reclamation area in Hong Kong] has two hangers capable of accommodating wide-bodied aircraft fully docked for maintenance. The company believes there is great potential in applying RFID technology to improve asset visibility in the maintenance cycle. This study illustrates how RFID can be used to achieve better visibility and reduce the risk of being severely penalized for failing to replace damaged components because of poor inventory control. The paper specifically addresses the following questions: (i) What is the value of RFID in aircraft parts maintenance tracking? (ii) What is the impact of item-level RFID on aircraft maintenance? (iii) What value do we gain from RFID initiatives in aircraft parts tracking? (iv) What are the relative benefits of this initiative? The rest of the paper is organized into topics. Section 2 covers a review of previous studies on the application of RFID technology in industry. Section 3 focuses on the value of visibility in aircraft maintenance made possible through RFID (based on the experiences of an aircraft company in Hong Kong). The section illustrates a real case showing how to evaluate RFID information. Section 4 performs a sensitivity analysis to further evaluate the value of RFID. Section 5 provides concluding notes and possible future directions. The appendix includes proofs of all propositions.

Airline operators must efficiently perform aircraft maintenance to ensure aviation safety and schedule punctuality. An analytical model of item-level RFID in the maintenance tracking of aircraft parts has been presented. The current model captures the most important benefits of item-level RFID in aircraft maintenance and attempts to reflect real world cost considerations in the deployment of item-level RFID-based aircraft part maintenance supply chains. The added values of RFID, as computed using real-life examples, are indeed significant. To check the validity of the model and further assess the value of RFID, a sensitivity analysis of the cost reductions in mishandling repair components and inventory control was performed. Based on this analysis, RFID can lead to savings on operating costs. In this study, the question of how visibility on the return flow of the repaired parts can affect the overall value of the repair life cycle has also been considered. Nevertheless, even if RFID technology solutions are viewed as important tools in improving efficiency and effectiveness, a number of challenges are still present. First, firms must integrate new technologies with legacy systems and databases as well as build accessibility for current and potential suppliers, customers, and even other business units within a company to fully leverage the benefits of the technology. Second, the model can be extended to a supplier of aircraft parts. The benefits will be realized in the form of improved forecasts, reduced inventory, reduced stock outage of aircraft parts, and shorter maintenance operating times. As with a case study, limitation with regards generalizability is evident, in that the results of the study may be biased. Further studies involving more companies should be conducted to confirm and extend the current findings by directly examining the effect of RFID technology.