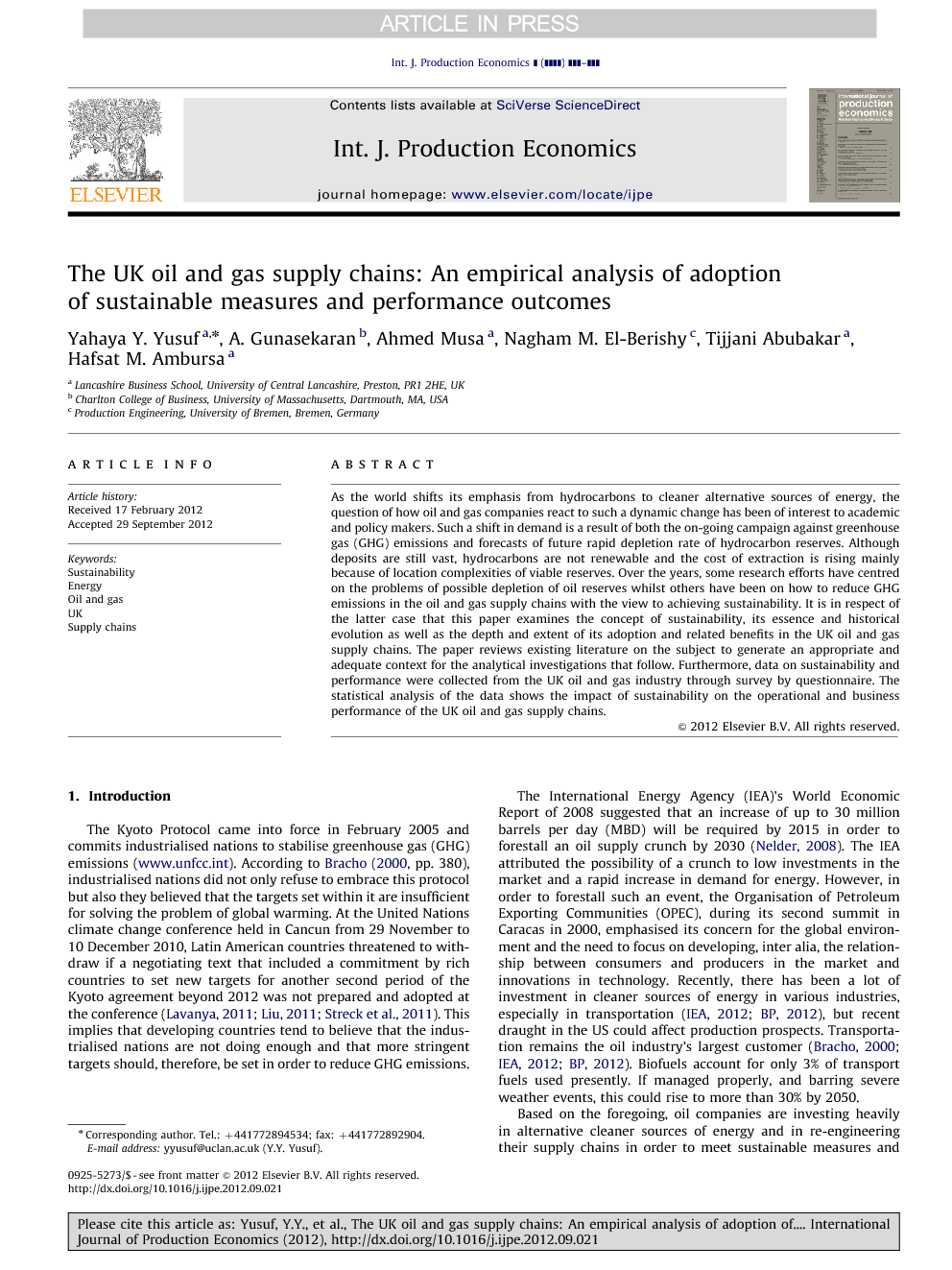 As the world shifts its emphasis from hydrocarbons to cleaner alternative sources of energy, the question of how oil and gas companies react to such a dynamic change has been of interest to academic and policy makers. Such a shift in demand is a result of both the on-going campaign against greenhouse gas (GHG) emissions and forecasts of future rapid depletion rate of hydrocarbon reserves. Although deposits are still vast, hydrocarbons are not renewable and the cost of extraction is rising mainly because of location complexities of viable reserves. Over the years, some research efforts have centred on the problems of possible depletion of oil reserves whilst others have been on how to reduce GHG emissions in the oil and gas supply chains with the view to achieving sustainability. It is in respect of the latter case that this paper examines the concept of sustainability, its essence and historical evolution as well as the depth and extent of its adoption and related benefits in the UK oil and gas supply chains. The paper reviews existing literature on the subject to generate an appropriate and adequate context for the analytical investigations that follow. Furthermore, data on sustainability and performance were collected from the UK oil and gas industry through survey by questionnaire. The statistical analysis of the data shows the impact of sustainability on the operational and business performance of the UK oil and gas supply chains.

The Kyoto Protocol came into force in February 2005 and commits industrialised nations to stabilise greenhouse gas (GHG) emissions (www.unfcc.int). According to Bracho (2000, pp. 380), industrialised nations did not only refuse to embrace this protocol but also they believed that the targets set within it are insufficient for solving the problem of global warming. At the United Nations climate change conference held in Cancun from 29 November to 10 December 2010, Latin American countries threatened to withdraw if a negotiating text that included a commitment by rich countries to set new targets for another second period of the Kyoto agreement beyond 2012 was not prepared and adopted at the conference (Lavanya, 2011, Liu, 2011 and Streck et al., 2011). This implies that developing countries tend to believe that the industrialised nations are not doing enough and that more stringent targets should, therefore, be set in order to reduce GHG emissions. The International Energy Agency (IEA)'s World Economic Report of 2008 suggested that an increase of up to 30 million barrels per day (MBD) will be required by 2015 in order to forestall an oil supply crunch by 2030 (Nelder, 2008). The IEA attributed the possibility of a crunch to low investments in the market and a rapid increase in demand for energy. However, in order to forestall such an event, the Organisation of Petroleum Exporting Communities (OPEC), during its second summit in Caracas in 2000, emphasised its concern for the global environment and the need to focus on developing, inter alia, the relationship between consumers and producers in the market and innovations in technology. Recently, there has been a lot of investment in cleaner sources of energy in various industries, especially in transportation (IEA, 2012 and BP, 2012), but recent draught in the US could affect production prospects. Transportation remains the oil industry’s largest customer (Bracho, 2000, IEA, 2012 and BP, 2012). Biofuels account for only 3% of transport fuels used presently. If managed properly, and barring severe weather events, this could rise to more than 30% by 2050. Based on the foregoing, oil companies are investing heavily in alternative cleaner sources of energy and in re-engineering their supply chains in order to meet sustainable measures and standards (IEA, 2012 and BP, 2012). It is in this context that this paper reports on the investigation of the prevalence of sustainability measures in the UK oil and gas industry and, more importantly, the impact of implementation of such measures on the performance of the companies in the industry. The paper explores the evolution of the concept of sustainability and the global dimensions of the fibres and issues surrounding sustainability. Following this are statements of research questions, contextualised in the challenges of sustainability in the UK oil and gas industry. The results and analysis of data from survey by questionnaire are presented as well as the conclusions from the study.

In the past 20 years, a number of factors have coalesced to increase academic and public interest in, and support for, sustainability, especially in the oil and gas industry. These factors include better public access to information, particularly via mass media; greater expectations of corporate pellucidity; oil spills, safety events and human rights contentions; increasing consumer and shareholder hopes, beliefs, and attitude; the expectations of associates of businesses; the activities of competitors; the introduction of more stringent regulations; greater interest and action by the investment community; regular publication and acceptance of a growing number of international indexes and standards; employee expectations and engagement; etc. The findings in this paper suggest that sustainability and green practices have taken root in the UK oil and gas industry and that sustainability has an impact on the business activities and performance of companies in this industry. This study has given a glimpse of the current situation in the industry, highlighted open questions, and indicated areas that are fertile grounds for further academic inquiry. Although sustainability has attracted a lot of attention globally in the past two decades, many companies still lack the financial wherewithal to adopt and nurture it. Those smaller firms need financial and technical assistance and continuing support from the industry giants, governments and international agencies (such as those connected with the UN and regional, economic and industrial groups, institutions and forums). The smaller players also need aid in complying with environmental regulations and legislations. Entrenching and ensuring sustainable growth and development is not a charge for an individual company but a collective task for governments, businesses, individuals and multi-lateral institutions. The results in this paper suggest a high degree of commitment by companies to adopt sustainability across the entire UK oil and gas supply chain. The results also give clear indications of the benefits of implementing sustainability measures in the industry. One limitation of this study is that many of the respondents were not willing to release information on their current and planned future investments in sustainability. None of the respondents was willing to disclose the financial resources already committed to measures of sustainability. The unobtainable information would have provided some interesting insight into how seriously, in reality, respondents count the question of sustainability. Another limitation is that the study was focussed primarily on individual companies and not on entire supply chains. To be effective, sustainability initiatives should spread throughout the supply chain. This aspect offers an opportunity for further studies. Another measure to be reassessed is how performance is measured relative to competition. The way this has been assessed in the present paper leaves room for further development and refinement. In this study we did not test for drivers and barriers of sustainability in the oil industry. However, we have results that use these instruments of analysis. They, and some other interesting perspectives, will form the basis of a future publication. Finally, there is currently an attempt under way by us to conduct longitudinal case studies at some of the respondent companies to corroborate and strengthen the findings of this paper. And there will be value in extending the research reported in the paper to other industries in the UK and beyond.