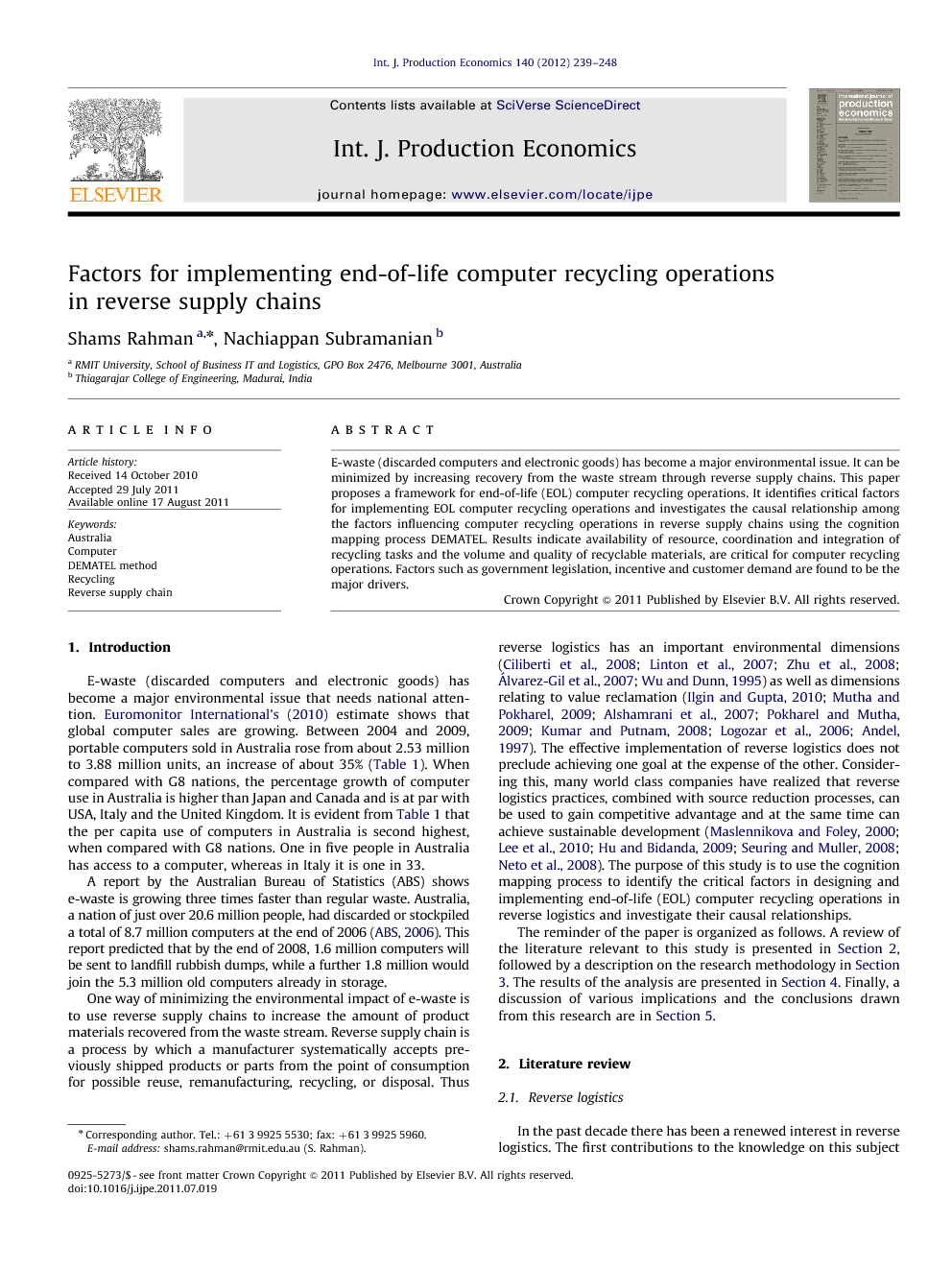 E-waste (discarded computers and electronic goods) has become a major environmental issue that needs national attention. Euromonitor International's (2010) estimate shows that global computer sales are growing. Between 2004 and 2009, portable computers sold in Australia rose from about 2.53 million to 3.88 million units, an increase of about 35% (Table 1). When compared with G8 nations, the percentage growth of computer use in Australia is higher than Japan and Canada and is at par with USA, Italy and the United Kingdom. It is evident from Table 1 that the per capita use of computers in Australia is second highest, when compared with G8 nations. One in five people in Australia has access to a computer, whereas in Italy it is one in 33.A report by the Australian Bureau of Statistics (ABS) shows e-waste is growing three times faster than regular waste. Australia, a nation of just over 20.6 million people, had discarded or stockpiled a total of 8.7 million computers at the end of 2006 (ABS, 2006). This report predicted that by the end of 2008, 1.6 million computers will be sent to landfill rubbish dumps, while a further 1.8 million would join the 5.3 million old computers already in storage. One way of minimizing the environmental impact of e-waste is to use reverse supply chains to increase the amount of product materials recovered from the waste stream. Reverse supply chain is a process by which a manufacturer systematically accepts previously shipped products or parts from the point of consumption for possible reuse, remanufacturing, recycling, or disposal. Thus reverse logistics has an important environmental dimensions (Ciliberti et al., 2008, Linton et al., 2007, Zhu et al., 2008, Álvarez-Gil et al., 2007 and Wu and Dunn, 1995) as well as dimensions relating to value reclamation (Ilgin and Gupta, 2010, Mutha and Pokharel, 2009, Alshamrani et al., 2007, Pokharel and Mutha, 2009, Kumar and Putnam, 2008, Logozar et al., 2006 and Andel, 1997). The effective implementation of reverse logistics does not preclude achieving one goal at the expense of the other. Considering this, many world class companies have realized that reverse logistics practices, combined with source reduction processes, can be used to gain competitive advantage and at the same time can achieve sustainable development (Maslennikova and Foley, 2000, Lee et al., 2010, Hu and Bidanda, 2009, Seuring and Muller, 2008 and Neto et al., 2008). The purpose of this study is to use the cognition mapping process to identify the critical factors in designing and implementing end-of-life (EOL) computer recycling operations in reverse logistics and investigate their causal relationships. The reminder of the paper is organized as follows. A review of the literature relevant to this study is presented in Section 2, followed by a description on the research methodology in Section 3. The results of the analysis are presented in Section 4. Finally, a discussion of various implications and the conclusions drawn from this research are in Section 5.

One way of minimizing the environmental impact of e-waste is to increase the amount of product materials recovered from the waste stream through recycling operations. This paper proposed a framework to implement end-of-life (EOL) computer recycling operations in reverse supply chains using eight factors. These factors are legislation; customer demand; strategic cost/benefit; environmental concern; volume and quality; incentive; resource and integration and coordination. Previous studies have prioritized the implementation factors/alternatives for recycling operations, whereas our study attempts not only to identify critical factors for implementing EOL recycling operations but also to determine the interrelationships between factors, using case studies. The DEMATEL Methodology was employed to generate a cognition map of causal relationships of the factors. The results show that companies involved in recycling operations in reverse supply chains should pay more attention to the factors categorized as net dispatchers/drivers (legislation, customer demand, environmental concern) and their impacts on the receivers (resource, strategic cost/benefit, integration and coordination and volume and quality). An assessment of the direct and indirect impacts through the casual links between factors would help mangers develop appropriate strategies for further improvement of the EOL recycling operations in reverse supply chains. This study is conducted using six senior managers from two companies. Future studies must consider larger sample size to assess the methodology and the effectiveness of the proposed solution to enable generalization. Furthermore, the rating of the scale could be obtained within a specific range, instead of getting a crisp number for factors, normally considered hard to judge. In that case, fuzzy DEMATEL could be used and might bring out the complex interrelationships and intertwining characteristics among factors under uncertainty. Factors that impact the operation of compliance schemes, i.e., distance and geography, population size and density, cost of labor, length of time in operation and consumer behavior could also be taken into consideration.