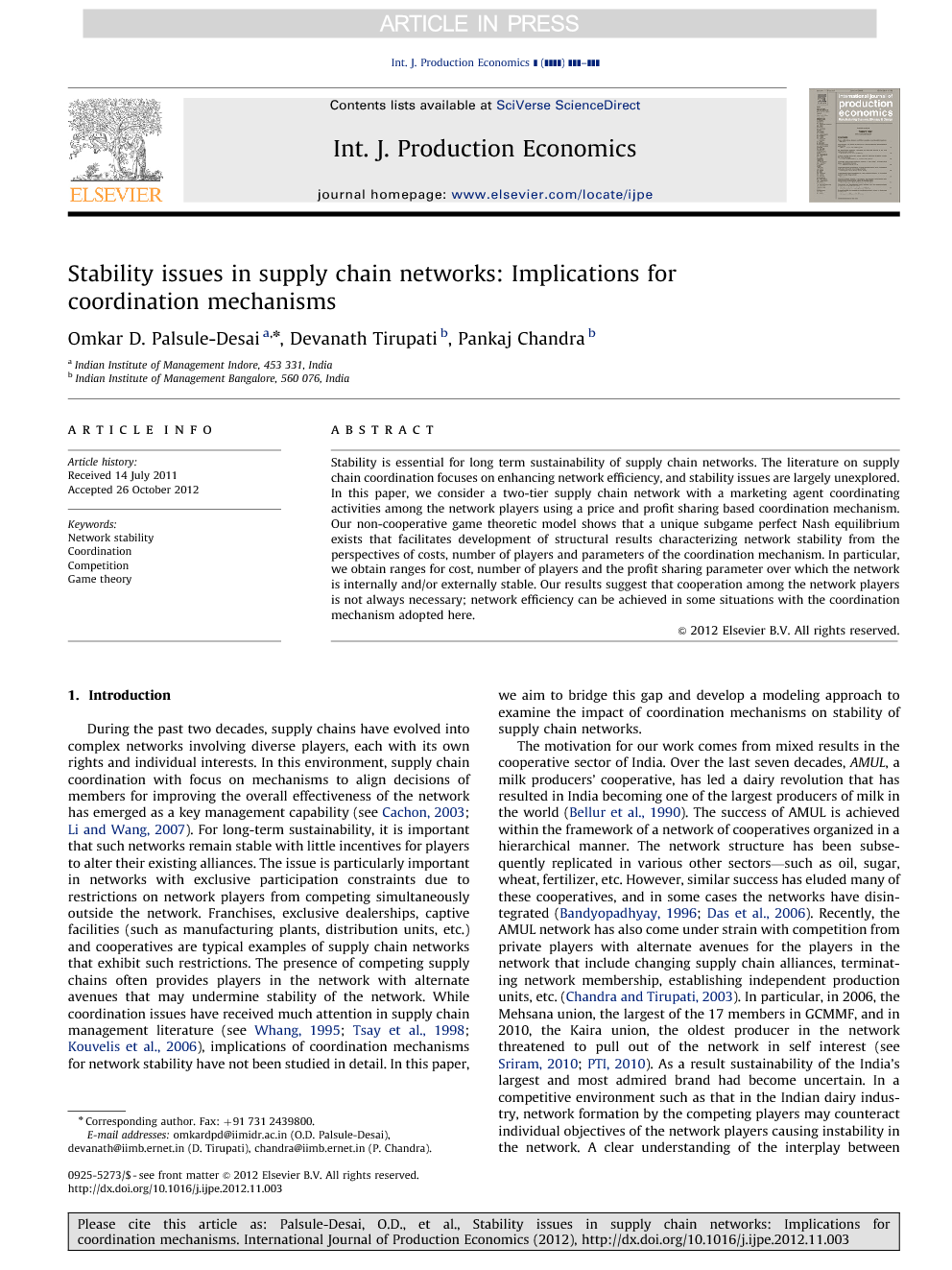 Stability is essential for long term sustainability of supply chain networks. The literature on supply chain coordination focuses on enhancing network efficiency, and stability issues are largely unexplored. In this paper, we consider a two-tier supply chain network with a marketing agent coordinating activities among the network players using a price and profit sharing based coordination mechanism. Our non-cooperative game theoretic model shows that a unique subgame perfect Nash equilibrium exists that facilitates development of structural results characterizing network stability from the perspectives of costs, number of players and parameters of the coordination mechanism. In particular, we obtain ranges for cost, number of players and the profit sharing parameter over which the network is internally and/or externally stable. Our results suggest that cooperation among the network players is not always necessary; network efficiency can be achieved in some situations with the coordination mechanism adopted here.

In this paper, we have developed a non-cooperative game theoretic model to study stability issues in a two-tier supply chain comprising two types of producers—independent producers who compete directly in the market and network producers that compete through a marketing agent who acts as a coordinator. The model is appropriate for supply chains with exclusivity contracts – such as franchises, cooperatives, exclusive dealership, etc. – that operate in a competitive environment and are governed by profit sharing coordination mechanism that influences individual players’ decisions. While coordination mechanisms and related issues on performance and efficiency have received much attention in the literature, implications for stability have largely remained unexplored. The work reported in this paper bridges this gap and it is complementary in nature. Our results can be broadly classified into two categories: (i) characterizing the equilibrium solutions resulting from the parameter choices of the coordination mechanism and describing the impact of cost parameters and the number of independent producers on the network surplus, prices, production, etc. (ii) Network stability: here we identify conditions under which the network is stable and develop bounds on parameters for assuring stability. The equilibrium solutions are primarily characterized as a function of profit sharing parameter. We show that there exists a range of procurement prices in which both network and independent producers compete together. For procurement price below the threshold value represented by the lower limit of the range, network producers do not produce. Similarly, for procurement price above the upper limit of the range, independent producers do not produce. The model presented in this paper is based on a real life network and recognizes the impact of potential non-cooperative behavior by the network producers. Our results show that under certain conditions, with appropriate choice of parameters, the profit sharing based coordination mechanism considered in the paper results in efficient network performance. Our results also show that the network surplus is independent of the profit share parameter, αα. This is not surprising since the coordination mechanism is internal to the network producers and reasonable coordination mechanisms with consistent parameter choices should not compromise the ability of the network producers to compete with independent producers. However, the choice of αα has implications for stability. We show that, similar to procurement price, there exists a range of αα over which the network is stable and for αα below a lower threshold (above an upper threshold) the network is externally (internally) stable. Likewise, we show that there exists a range for cost parameters and the number of independent producers over which the network is stable either internally and/or externally. Our results are based on several simplifying assumptions; nevertheless they are useful and provide insights and guidelines for managerial decision making. The model and the results presented in this paper may be interpreted as a building block in the development of richer and more comprehensive framework, and we conclude the paper with some remarks in this regard. First, our analysis is based on one particular coordination mechanism. While the one analyzed in the paper is common and popular both in practice and literature, it may be useful to extend the analysis to other mechanisms and to the extent possible generalize the results. Second, we ignored capacity constraints and assumed that the producers are identical. The model can be enriched with a more elaborate, realistic cost structure and permit producers with non-identical costs. Further, it may be useful to consider scale economies in marketing and distribution costs associated with the marketing agent. Third, it may be useful to analyze the network with alternative objectives mentioned briefly in Section 4. Finally, incorporating entry/exit decisions by individual players will expand the scope of the model significantly and enhance its applicability.