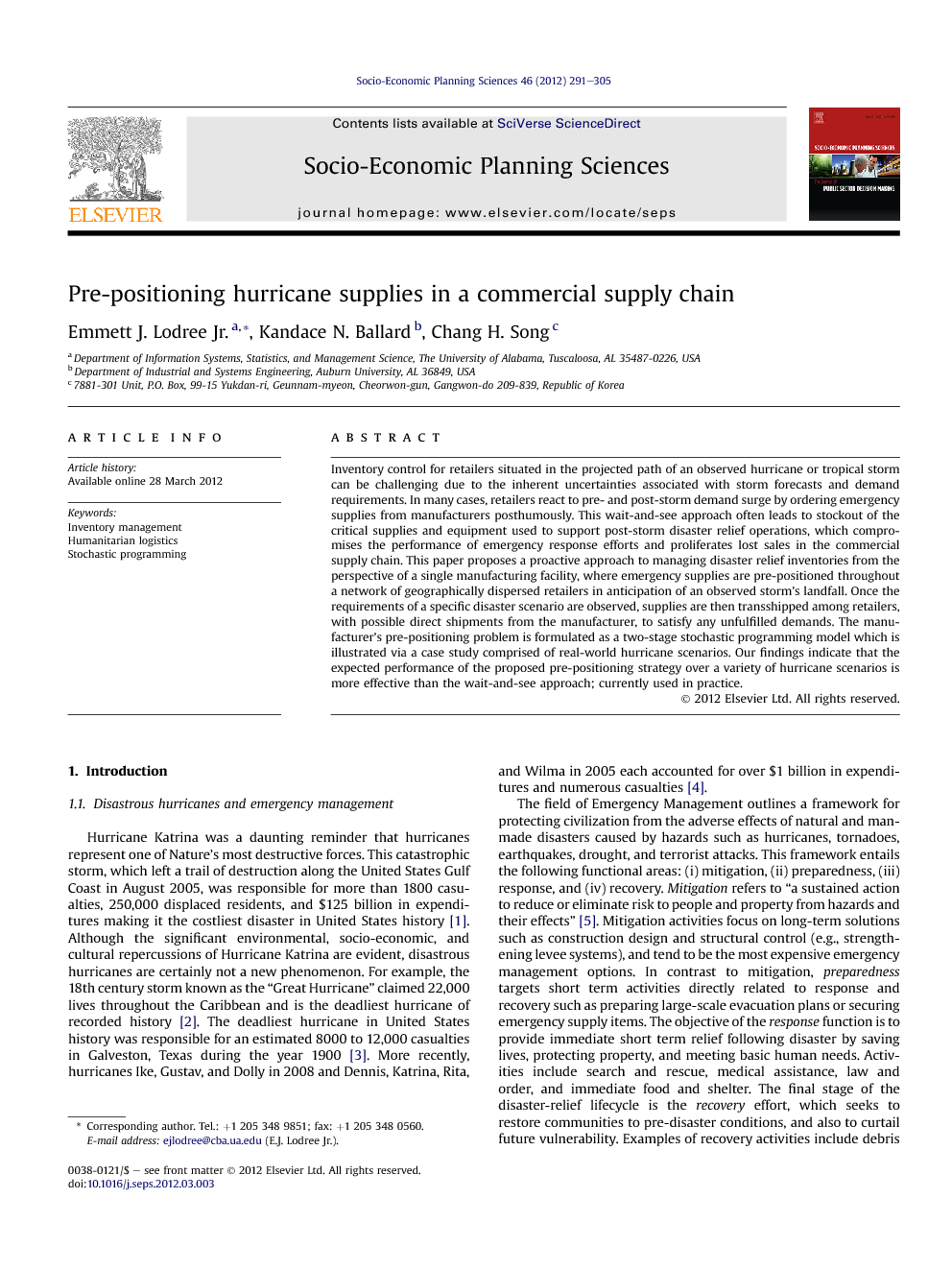 Inventory control for retailers situated in the projected path of an observed hurricane or tropical storm can be challenging due to the inherent uncertainties associated with storm forecasts and demand requirements. In many cases, retailers react to pre- and post-storm demand surge by ordering emergency supplies from manufacturers posthumously. This wait-and-see approach often leads to stockout of the critical supplies and equipment used to support post-storm disaster relief operations, which compromises the performance of emergency response efforts and proliferates lost sales in the commercial supply chain. This paper proposes a proactive approach to managing disaster relief inventories from the perspective of a single manufacturing facility, where emergency supplies are pre-positioned throughout a network of geographically dispersed retailers in anticipation of an observed storm's landfall. Once the requirements of a specific disaster scenario are observed, supplies are then transshipped among retailers, with possible direct shipments from the manufacturer, to satisfy any unfulfilled demands. The manufacturer's pre-positioning problem is formulated as a two-stage stochastic programming model which is illustrated via a case study comprised of real-world hurricane scenarios. Our findings indicate that the expected performance of the proposed pre-positioning strategy over a variety of hurricane scenarios is more effective than the wait-and-see approach; currently used in practice.

Hurricane Katrina was a daunting reminder that hurricanes represent one of Nature's most destructive forces. This catastrophic storm, which left a trail of destruction along the United States Gulf Coast in August 2005, was responsible for more than 1800 casualties, 250,000 displaced residents, and $125 billion in expenditures making it the costliest disaster in United States history [1]. Although the significant environmental, socio-economic, and cultural repercussions of Hurricane Katrina are evident, disastrous hurricanes are certainly not a new phenomenon. For example, the 18th century storm known as the “Great Hurricane” claimed 22,000 lives throughout the Caribbean and is the deadliest hurricane of recorded history [2]. The deadliest hurricane in United States history was responsible for an estimated 8000 to 12,000 casualties in Galveston, Texas during the year 1900 [3]. More recently, hurricanes Ike, Gustav, and Dolly in 2008 and Dennis, Katrina, Rita, and Wilma in 2005 each accounted for over $1 billion in expenditures and numerous casualties [4]. The field of Emergency Management outlines a framework for protecting civilization from the adverse effects of natural and man-made disasters caused by hazards such as hurricanes, tornadoes, earthquakes, drought, and terrorist attacks. This framework entails the following functional areas: (i) mitigation, (ii) preparedness, (iii) response, and (iv) recovery. Mitigation refers to “a sustained action to reduce or eliminate risk to people and property from hazards and their effects” [5]. Mitigation activities focus on long-term solutions such as construction design and structural control (e.g., strengthening levee systems), and tend to be the most expensive emergency management options. In contrast to mitigation, preparedness targets short term activities directly related to response and recovery such as preparing large-scale evacuation plans or securing emergency supply items. The objective of the response function is to provide immediate short term relief following disaster by saving lives, protecting property, and meeting basic human needs. Activities include search and rescue, medical assistance, law and order, and immediate food and shelter. The final stage of the disaster-relief lifecycle is the recovery effort, which seeks to restore communities to pre-disaster conditions, and also to curtail future vulnerability. Examples of recovery activities include debris removal, rebuilding residential properties, and restoring businesses.

This paper is motivated by the problem that emerges when a commercial manufacturer responds to orders for emergency supply items placed by retailers situated in the path of an observed hurricane or tropical storm. In practice, retailers often postpone the decision to initiate emergency orders from manufacturers until the demand requirements associated with pre-storm demand surge or post-storm disaster relief activities are known with certainty. A typical consequence of this reactive “wait-and-see” policy is widespread stockout of emergency supplies and equipment, which compromises the effectiveness of disaster relief operations and proliferates lost sales for the commercial supply chain. In an effort to encourage higher service levels from the private sector in support of disaster relief efforts, this paper proposes a proactive inventory pre-positioning strategy from the perspective of the manufacturer. The proposed pre-positioning strategy is characterized by a single manufacturer that pushes inventory across a network of retailers prior to the landfall of an observed storm, and assumes responsibility for the resulting costs and risks similar to vendor managed inventory systems. The manufacturer's pre-positioning problem is represented as a two-stage stochastic programming model. During the first stage, supplies are distributed from the manufacturer to selected retailer locations within the supply chain network. The corresponding second stage is characterized by transshipment of inventories among retailers, including possible direct shipments from the manufacturer, after demand information becomes known with certainty. To illustrate the model, the case study introduced in reference [28] which is derived from historical hurricane data, was solved. Solutions were generated using the stochastic programming capability of the commercial software program, What's Best™. In addition, a heuristic solution methodology (PDSA) was introduced for the purpose of reducing the computational effort associated with solving large-scale problems. The proposed approach produced solutions within 3%–5% of optimality and was executed with negligible computation time in a spreadsheet. Computational results and sensitivity analysis based on the case study suggest that the optimal pre-positioning strategy is always more cost effective than the wait-and-see approach often used in practice whenever the landfall locations and demand requirements associated with an observed storm are uncertain. The stochastic programming model presented in this study can be extended in several ways to reflect additional issues that may arise when commercial manufacturers attempt pre-positioning strategies in practice. In fact, some of these issues have been addressed in the pre-positioning literature based on the perspectives of government and non-government organizations and humanitarian relief supply chains. For instance, network reliability in which pre-positioned inventories and roadways are partially or completely destroyed could be considered as in [28], [31] and [32]. Also, it would be useful from a practical standpoint to expand the model to include multiple product types as in [26], [27], [28], [30] and [32]. There are also extensions which have not been considered in the literature that would be particularly relevant to the commercial pre-positioning problem introduced in this study. Before describing these extensions, first recall that one of the unique features of the pre-positioning model developed in Section 4.1 is that it represents the manufacturer's perspective and cost structure. However, a limitation of the model from a production standpoint is that infinite production capacity is assumed and that only the variable cost of production is considered. It would therefore be of interest to expand the model to include more details regarding the manufacturer's production process and cost measures. For example, a finite production rate could be incorporated into the model as opposed to assuming that production is instantaneous. Similarly, the model could also be extended such that production rate is a decision variable and the corresponding production cost is a function of the selected rate. Another useful extension would be a multiple product model as previously mentioned. This would introduce opportunities for scheduling production to reduce the costs associated with changeovers. Differentiating pre- and post-storm production costs might also be relevant to the proposed pre-positioning strategy in practice. In a post-storm environment, constrained resources may lead to overtime labor and other inflated costs pertaining to production. In terms of distribution, only the variable cost of transportation is considered. Therefore, it would be interesting to examine the effect of fixed transportation costs in a future effort. The model introduced in this paper characterizes the role of the manufacturer in a short-term pre-positioning environment. This basic model, along with the above-mentioned extensions related to the manufacturer's problem within the context of pre-positioning, represents a promising new direction for disaster relief research.