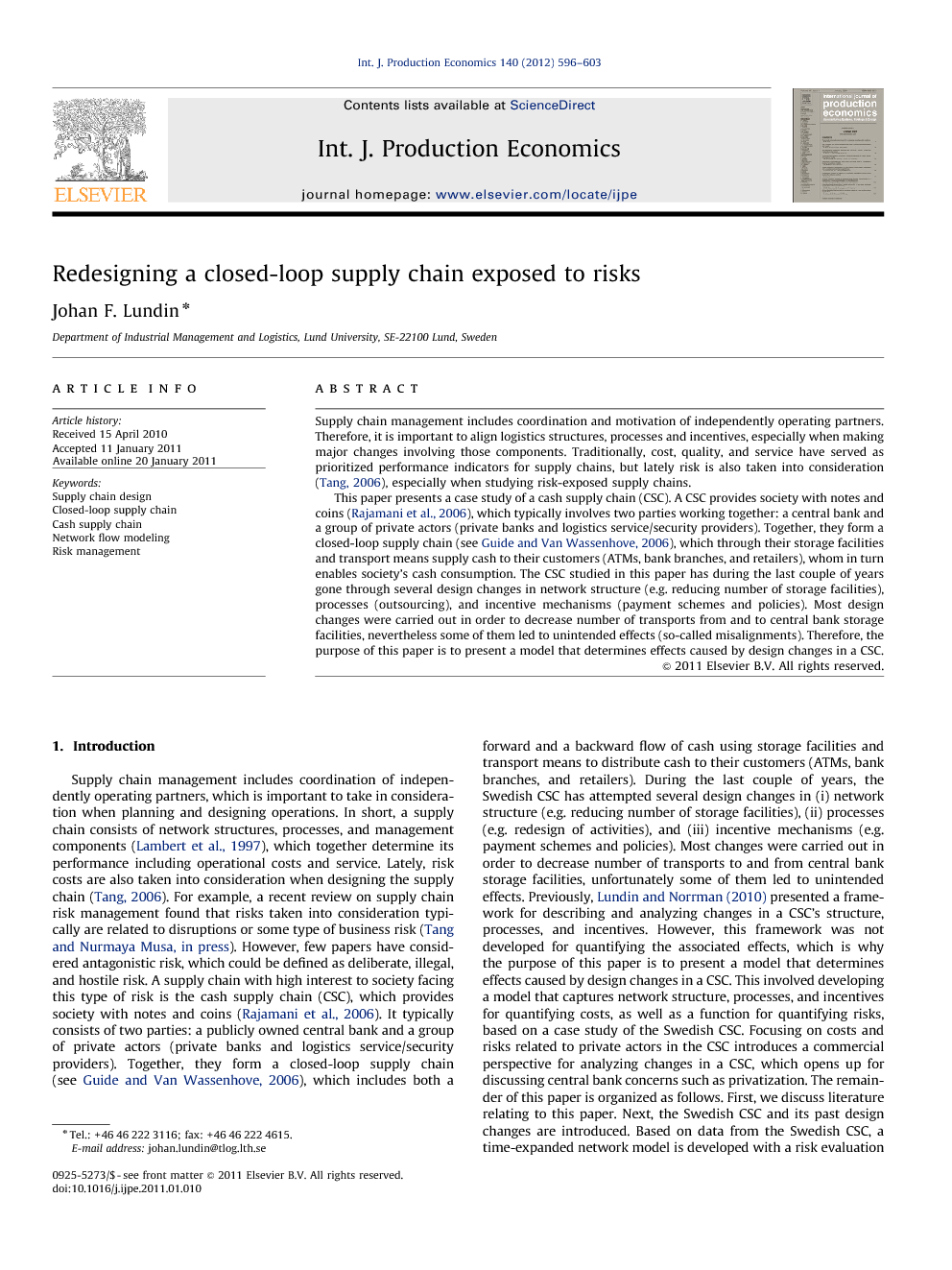 Supply chain management includes coordination and motivation of independently operating partners. Therefore, it is important to align logistics structures, processes and incentives, especially when making major changes involving those components. Traditionally, cost, quality, and service have served as prioritized performance indicators for supply chains, but lately risk is also taken into consideration (Tang, 2006), especially when studying risk-exposed supply chains. This paper presents a case study of a cash supply chain (CSC). A CSC provides society with notes and coins (Rajamani et al., 2006), which typically involves two parties working together: a central bank and a group of private actors (private banks and logistics service/security providers). Together, they form a closed-loop supply chain (see Guide and Van Wassenhove, 2006), which through their storage facilities and transport means supply cash to their customers (ATMs, bank branches, and retailers), whom in turn enables society's cash consumption. The CSC studied in this paper has during the last couple of years gone through several design changes in network structure (e.g. reducing number of storage facilities), processes (outsourcing), and incentive mechanisms (payment schemes and policies). Most design changes were carried out in order to decrease number of transports from and to central bank storage facilities, nevertheless some of them led to unintended effects (so-called misalignments). Therefore, the purpose of this paper is to present a model that determines effects caused by design changes in a CSC.

Supply chain management includes coordination of independently operating partners, which is important to take in consideration when planning and designing operations. In short, a supply chain consists of network structures, processes, and management components (Lambert et al., 1997), which together determine its performance including operational costs and service. Lately, risk costs are also taken into consideration when designing the supply chain (Tang, 2006). For example, a recent review on supply chain risk management found that risks taken into consideration typically are related to disruptions or some type of business risk (Tang and Nurmaya Musa, in press). However, few papers have considered antagonistic risk, which could be defined as deliberate, illegal, and hostile risk. A supply chain with high interest to society facing this type of risk is the cash supply chain (CSC), which provides society with notes and coins (Rajamani et al., 2006). It typically consists of two parties: a publicly owned central bank and a group of private actors (private banks and logistics service/security providers). Together, they form a closed-loop supply chain (see Guide and Van Wassenhove, 2006), which includes both a forward and a backward flow of cash using storage facilities and transport means to distribute cash to their customers (ATMs, bank branches, and retailers). During the last couple of years, the Swedish CSC has attempted several design changes in (i) network structure (e.g. reducing number of storage facilities), (ii) processes (e.g. redesign of activities), and (iii) incentive mechanisms (e.g. payment schemes and policies). Most changes were carried out in order to decrease number of transports to and from central bank storage facilities, unfortunately some of them led to unintended effects. Previously, Lundin and Norrman (2010) presented a framework for describing and analyzing changes in a CSC's structure, processes, and incentives. However, this framework was not developed for quantifying the associated effects, which is why the purpose of this paper is to present a model that determines effects caused by design changes in a CSC. This involved developing a model that captures network structure, processes, and incentives for quantifying costs, as well as a function for quantifying risks, based on a case study of the Swedish CSC. Focusing on costs and risks related to private actors in the CSC introduces a commercial perspective for analyzing changes in a CSC, which opens up for discussing central bank concerns such as privatization. The remainder of this paper is organized as follows. First, we discuss literature relating to this paper. Next, the Swedish CSC and its past design changes are introduced. Based on data from the Swedish CSC, a time-expanded network model is developed with a risk evaluation function for each part of the network. Then, the supply chain design changes are analyzed from a cost and antagonistic risk perspective using the network flow model and the risk function. Finally, conclusions are drawn and results discussed.

Making efficient design changes in a supply chain is important in order to improve its performance. However, changes in structure, processes, and incentives with some intended effects may also lead to unintended ones, which makes it important to quantify them in advance. This paper presented a case study of the Swedish CSC and its structure, processes, and incentives, which has undergone three major design changes: centralization of central bank storage facilities, returns to central bank storage facilities, and interest compensation at depots. Results showed that centralization from two to one central bank storage facilities led to unintended increases in transportation costs and risk, while eliminating returns to central bank storage facilities led to increased transportation flow, larger shipment sizes, and larger risk, but reduced transportation costs. Finally, results showed that providing interest compensation private depots led to reduced transportation costs as well as risk. Based on these results, we recommend other central banks to evaluate whether or not they should provide interest compensation in order to reduce risks with their associated CSC. Previous literature has focused on process and incentive changes in the CSC (Geismar et al., 2007 and Dawande et al., 2010), using examples with a societal perspective from the United States. This study contributes with an approach for analyzing structure (network design) that is applicable to real case data using a more commercial perspective, where all private actors in the CSC are considered. Previous, more stylistic, models have neglected to capture CIT companies as an important actor, which importance only will grow as central banks further pursue privatization in their supply chains. Furthermore, this study introduces risk costs as an important measurement, which also has been neglected in previous studies. Previous studies encompassing incentives in closed-loop supply chains have focused on cannibalization (Yadav et al., 2003 and Savaskan et al., 2004), trade-off between product durability and production costs (Debo et al., 2005), and return rates (Ferguson et al., 2006). Where this study contributes with a more comprehensive perspective on the closed-loop supply chain including structure and processes as well as costs associated with the supply chain for both the forward and reverse flow, where structure is captured using nodes, processes using arcs, and incentives together with costs using an objective function. We suggest that central banks use this model for evaluating future design changes in their associated CSC. If one would like to extend this model, we recommend including more types of costs (e.g. warehousing costs, production costs) as well as further developing the risk function.