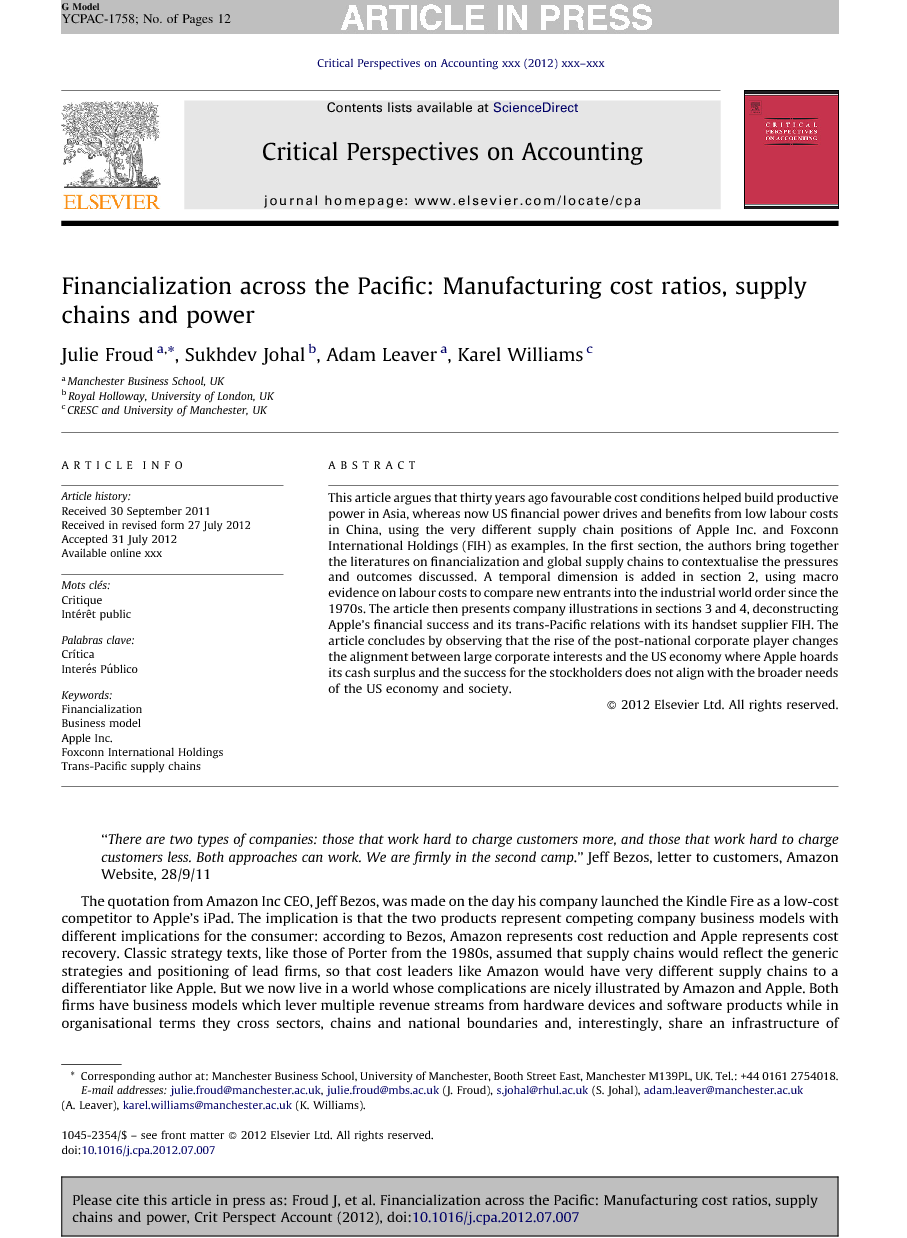 This article argues that thirty years ago favourable cost conditions helped build productive power in Asia, whereas now US financial power drives and benefits from low labour costs in China, using the very different supply chain positions of Apple Inc. and Foxconn International Holdings (FIH) as examples. In the first section, the authors bring together the literatures on financialization and global supply chains to contextualise the pressures and outcomes discussed. A temporal dimension is added in section 2, using macro evidence on labour costs to compare new entrants into the industrial world order since the 1970s. The article then presents company illustrations in sections 3 and 4, deconstructing Apple's financial success and its trans-Pacific relations with its handset supplier FIH. The article concludes by observing that the rise of the post-national corporate player changes the alignment between large corporate interests and the US economy where Apple hoards its cash surplus and the success for the stockholders does not align with the broader needs of the US economy and society.

The quotation from Amazon Inc CEO, Jeff Bezos, was made on the day his company launched the Kindle Fire as a low-cost competitor to Apple's iPad. The implication is that the two products represent competing company business models with different implications for the consumer: according to Bezos, Amazon represents cost reduction and Apple represents cost recovery. Classic strategy texts, like those of Porter from the 1980s, assumed that supply chains would reflect the generic strategies and positioning of lead firms, so that cost leaders like Amazon would have very different supply chains to a differentiator like Apple. But we now live in a world whose complications are nicely illustrated by Amazon and Apple. Both firms have business models which lever multiple revenue streams from hardware devices and software products while in organisational terms they cross sectors, chains and national boundaries and, interestingly, share an infrastructure of componentry and assembly. Hon Hai's Chinese subsidiary Foxconn is one of the assemblers of choice for Apple, Amazon and other Western firms producing hand-held smart devices at various price points from nearly generic componentry. This article engages both discursively and empirically with some of the changing business model complexities of the globalised, financialized world since the 1970s. The first section brings together two distinct literatures on financialization and global supply chains; while the second section presents macro evidence on cost ratios in low wage Asia. Supply chain relations are explored by considering the cases of Foxconn International Holdings (FIH) in Section 3 and of one of its major customers, Apple Inc., in Section 4. The particular relationship between Apple and FIH suggests that the trans-Pacific supply chain has outcomes that are relevant for national economic development in both China and the USA. The findings are startling when set in the context of earlier waves of competition with Japanese and Korean manufacturers. While continuities can be recognised, including a long-standing tendency towards lower production costs, the contexts and outcomes can be strikingly different where corporations are subject to shareholder value pressures. The changes from the 1980s to the 2000s can be related to differences in the relation between Asian low-wage manufacturers and giant US corporations whose organisation and strategy has been changed by the pressures of financialization and the possibility of long transnational supply chains. When the Japanese sold cars in the USA in the 1970s and 1980s, the contest was between compact, nationally enclosed supply chains, with lower wages sustaining Japanese advantage so that firms like Toyota could reinvest profits and grow market share as they built their own brands. The position in the 2000s is complicated by financialization and long trans-Pacific supply chains where power is often wielded by US firms which act as proxies for the stock market and boost profits by multiple tactics including control of design, consumer marketing and the use of contract power to take profits at the expense of margins in their Chinese suppliers. The case study of FIH and Apple in this article can be no more than suggestive about these power relations and their impact on Chinese ratios, but such Chinese firms may find it more difficult to become national champions and move from low-wage entrant to high-image brand as Japanese firms like Sony and Toyota did in the 1980s or Korean firms like Samsung and Hyundai have done in the 2000s. By invoking financialization, the article focuses on the corporate rather than the macro-economic level. Here, financialization is manifested as attempts to meet external demands for shareholder value creation through profits and share price (rather than productive measures like market share), combined with a powerful narrative about the goals and purpose of the organisation and its success in achieving them (Froud et al., 2006). In doing so, we highlight the intersection between shareholder value pressures in the USA and new forms of supply chain organisation, which may result in different outcomes for successive generations of Asian entrants and established players. Thirty years ago, favourable cost ratios built productive power in Asia; now US financial power can drive ratios in China. As we will demonstrate in section two, the Chinese have a larger ratio advantage arising from low wages than the Japanese enjoyed in the previous generation. But Chinese advance in key sectors can be impeded by financialized Western firms who control final markets and capture the profits of Chinese assemblers. This observation also raises issues about how the rise of the post national corporate player changes the alignment between large corporate interests and the US economy. In the case of Apple, it is not a simple logic of competitive markets and slim margins that drive outsourcing, as could be argued in sectors like garments. Rather, the outsourcing via trans-Pacific supply chains is part of a business model of strong brand position and financial performance that differs from more general cost reduction pressures.

This article has argued that the fragmentary evidence on Chinese entrance and trans-Pacific manufacturing chains is complex and contradictory, reflecting major differences from an earlier era of competition between US and Asian manufacturers. The macro aggregates presented suggest that Chinese manufacturing generally has the advantage of a low LSVA, like Japan and Korea in an earlier generation. More so, China also offers a large, flexible workforce in companies that will accommodate very specific demands at short notice; all of which makes it possible for a company like Apple to bring its new products to market very quickly, as well as relatively cheaply, via trans-Pacific supply chains. We should not assume that power is routinely used in the same way inside other supply chains, but the FIH and Apple case highlights distributive outcomes and questions the benefits from the exercise of corporate power to secure high margins for lead firms. In an earlier generation, it was assumed that ‘what was good for GM was good for America’; now Apple's success largely benefits and is appreciated by investors; and, for its size, Apple's contribution to the domestic economy is limited by its reliance on outsourced assembly. The implication of the analysis in this article is that measures of corporate success taken at one point in a chain need to be set in the context of the whole chain. We have shown that FIH has struggled to use its low labour costs to capture profits and to develop strengths that would allow it to compete in final products, as Japanese and Korean companies have previously done. In conclusion, this analysis serves to highlight broader questions about the how financialized trans-Pacific supply chains can lead to complex economic and social outcomes, at corporate and national levels.