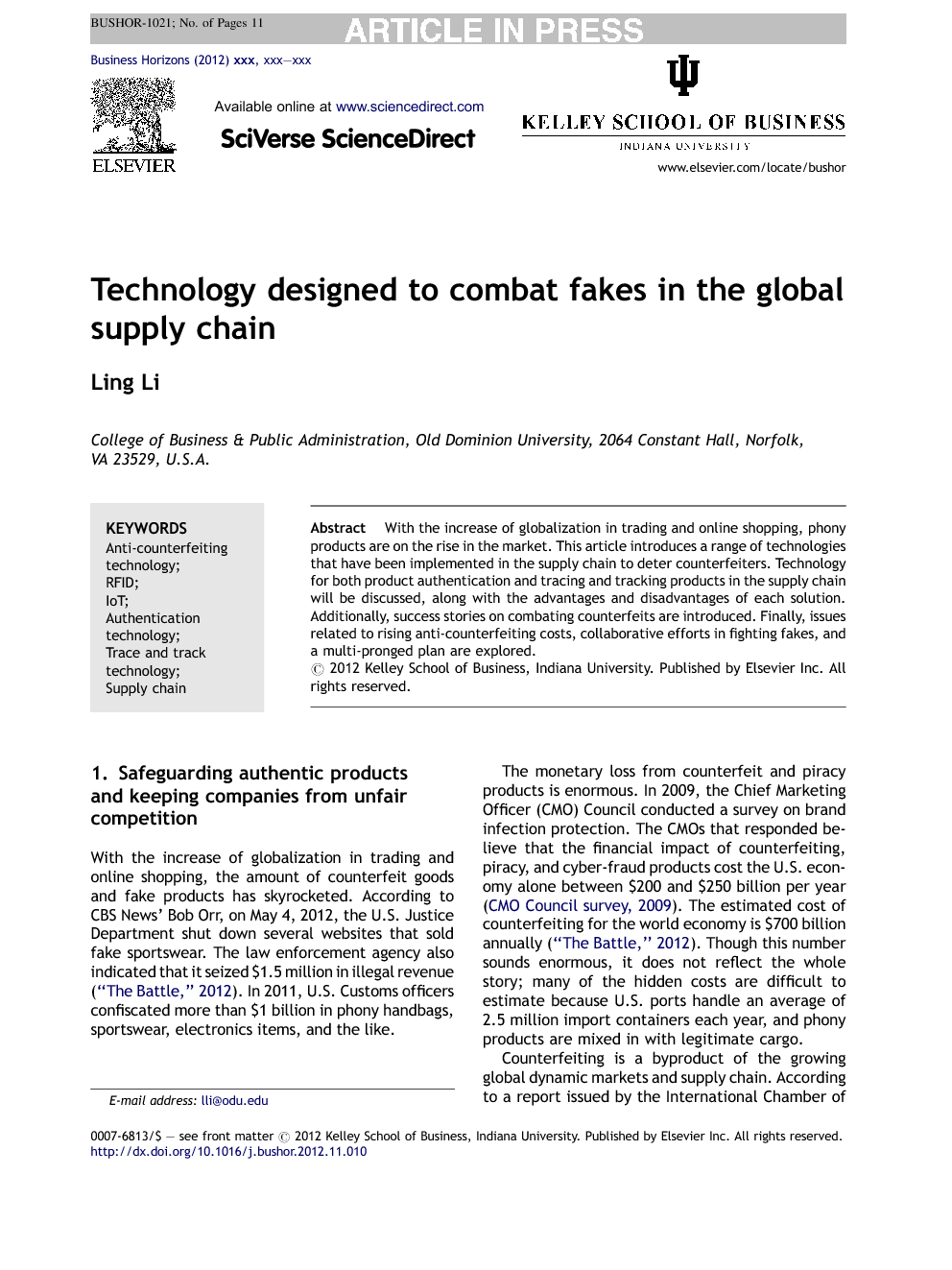 With the increase of globalization in trading and online shopping, phony products are on the rise in the market. This article introduces a range of technologies that have been implemented in the supply chain to deter counterfeiters. Technology for both product authentication and tracing and tracking products in the supply chain will be discussed, along with the advantages and disadvantages of each solution. Additionally, success stories on combating counterfeits are introduced. Finally, issues related to rising anti-counterfeiting costs, collaborative efforts in fighting fakes, and a multi-pronged plan are explored.

With the increase of globalization in trading and online shopping, the amount of counterfeit goods and fake products has skyrocketed. According to CBS News’ Bob Orr, on May 4, 2012, the U.S. Justice Department shut down several websites that sold fake sportswear. The law enforcement agency also indicated that it seized $1.5 million in illegal revenue (“The Battle,” 2012). In 2011, U.S. Customs officers confiscated more than $1 billion in phony handbags, sportswear, electronics items, and the like. The monetary loss from counterfeit and piracy products is enormous. In 2009, the Chief Marketing Officer (CMO) Council conducted a survey on brand infection protection. The CMOs that responded believe that the financial impact of counterfeiting, piracy, and cyber-fraud products cost the U.S. economy alone between $200 and $250 billion per year (CMO Council survey, 2009). The estimated cost of counterfeiting for the world economy is $700 billion annually (“The Battle,” 2012). Though this number sounds enormous, it does not reflect the whole story; many of the hidden costs are difficult to estimate because U.S. ports handle an average of 2.5 million import containers each year, and phony products are mixed in with legitimate cargo. Counterfeiting is a byproduct of the growing global dynamic markets and supply chain. According to a report issued by the International Chamber of Commerce (ICC) Counterfeiting Intelligence Bureau (2005), counterfeiting is a critical issue in today's global supply chain. As markets have become more global, business competition has evolved from a firm-versus-firm race to a supply chain-against-supply chain battle and a wrestling match between lawful manufacturers and counterfeiters. For many companies around the world, fighting fraudulent products is a large and growing challenge (Berman, 2008, Chaudhry, 2006, Chaudhry et al., 2011 and Chaudhry et al., 2009). Faking products has developed into an existential threat to the rights of both businesses and consumers. This threat calls for anti-counterfeiting technology to safeguard authentic products and keep companies from unfair competition.

As Chaudhry et al. (2009) indicated in their article on preserving intellectual property rights, a multi-pronged action plan that involves supply chain channel members, employees, and law enforcement is crucial to create a culture of anti-counterfeiting. In the long run, various anti-counterfeiting technologies, government legislation, customs and border seizures, federal lawsuits, and post-litigation policing should work together to create an effective method for dealing with future issues and enforcing a zero-tolerance policy against counterfeits. This type of plan can be implemented in a phased manner as experience in anti-counterfeiting accumulates and technology matures. Global organizations—such as the World Trade Organization, the WHO, and the EC—have held numerous conferences on anti-counterfeiting to discuss the concept of intellectual property rights (IPR) and the importance of safeguarding the public's rights and safety. Countries around the world have learned to take IPR seriously. Statistics on border seizures are reported regularly, and lawsuits on intellectual property infringement have frequently been won. All these efforts have enhanced the awareness of a zero-tolerance policy for counterfeiting.