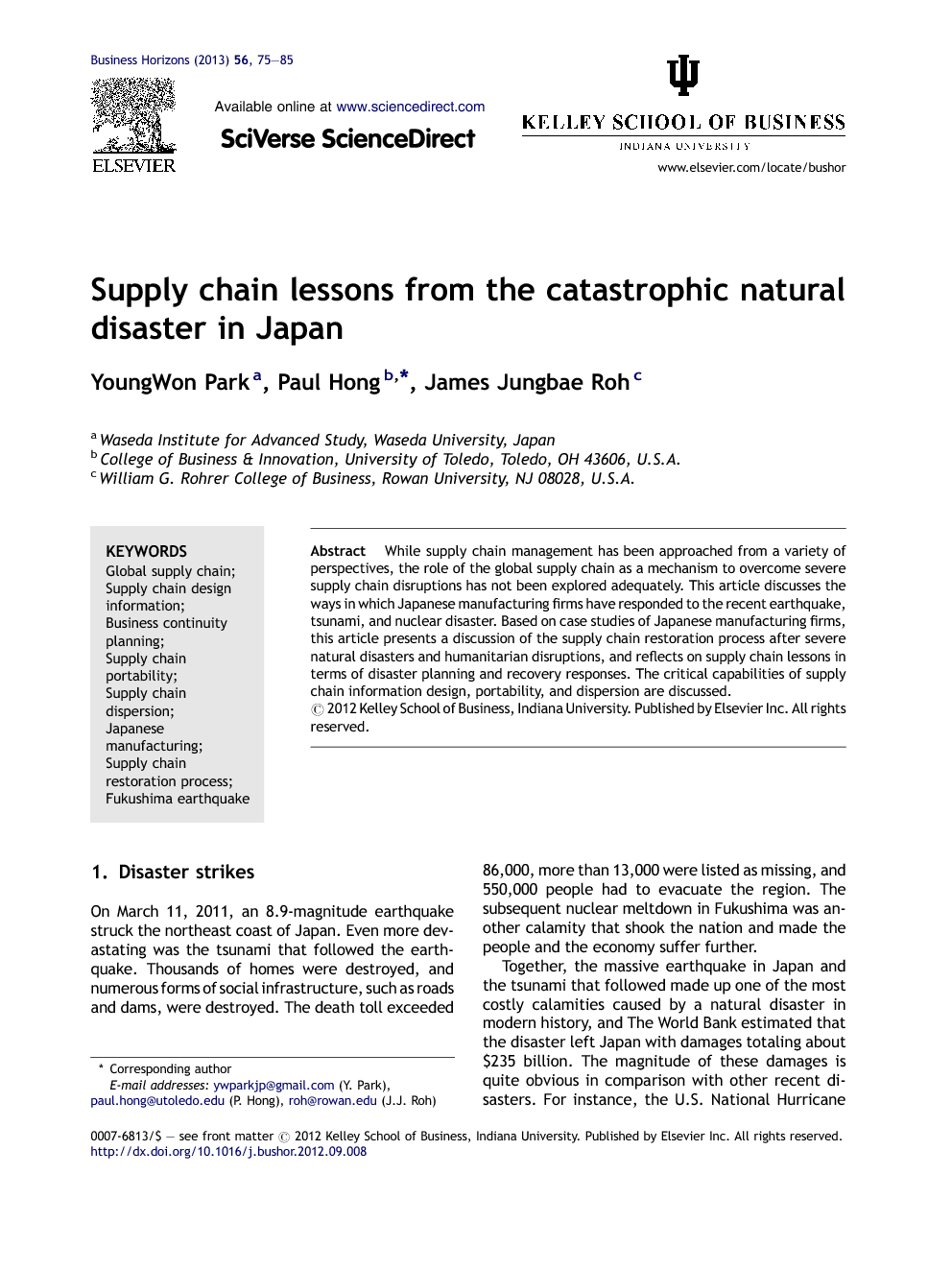 While supply chain management has been approached from a variety of perspectives, the role of the global supply chain as a mechanism to overcome severe supply chain disruptions has not been explored adequately. This article discusses the ways in which Japanese manufacturing firms have responded to the recent earthquake, tsunami, and nuclear disaster. Based on case studies of Japanese manufacturing firms, this article presents a discussion of the supply chain restoration process after severe natural disasters and humanitarian disruptions, and reflects on supply chain lessons in terms of disaster planning and recovery responses. The critical capabilities of supply chain information design, portability, and dispersion are discussed.

On March 11, 2011, an 8.9-magnitude earthquake struck the northeast coast of Japan. Even more devastating was the tsunami that followed the earthquake. Thousands of homes were destroyed, and numerous forms of social infrastructure, such as roads and dams, were destroyed. The death toll exceeded 86,000, more than 13,000 were listed as missing, and 550,000 people had to evacuate the region. The subsequent nuclear meltdown in Fukushima was another calamity that shook the nation and made the people and the economy suffer further. Together, the massive earthquake in Japan and the tsunami that followed made up one of the most costly calamities caused by a natural disaster in modern history, and The World Bank estimated that the disaster left Japan with damages totaling about $235 billion. The magnitude of these damages is quite obvious in comparison with other recent disasters. For instance, the U.S. National Hurricane Center estimated that in 2005, Hurricane Katrina cost the state of Louisiana $81.2 billion in damage, and the 2010 Haiti earthquake cost $8 billion (Nakamura, 2011). The 2004 tsunami that struck India, Indonesia, Sri Lanka, and Thailand was reported to have cost $9.5 billion. The earthquake and tsunami in Japan disrupted both domestic and global supply chains. During the 1960s and 1970s, Japan rose up as the world's second largest manufacturer, and it established itself as a major manufacturing hub in the world. For example, Japan provides 60% of the world's silicon, an important raw material for semiconductor chips. Japan is also the world's largest supplier of dynamic random access memory and flash memory—a form of memory that can retain data without a power supply. Flash memory plays an important role in supplying standard logic controllers, liquid crystal display (LCD), and LCD parts and materials. Right after the disaster, the prices for these components in the world market soared by 20%, showing the world's strong dependence on the Japanese supply chain. These catastrophic disruptions have had serious impacts on firm performance. For example, global automakers—such as Ford, Chrysler, Volkswagen, BMW, Toyota, and GM—depend on Japanese suppliers and had to place a hold on some paint colors after the earthquake and tsunami (Schmitt, 2011). Renesas—a major automotive computer chip maker located in Japan—was badly damaged, representing a major blow to the automotive industry around the world. More specifically, a typical car contains about 100 different microcontrollers, which function as the car's brain, and 40% of the world's supply comes from Renesas (Pollack & Lohr, 2011). Additionally, the only production sites of Xirallic pigments (i.e., specialty paints used to give greater color intensity to automobiles’ appearance) were badly damaged. Such supply chain disruptions resulted in critical component part shortages and thus subsequent operational shutdowns in GM, Ford, and Chrysler plants in the United States (Bunkley, 2011). Supply chain management has been examined from a variety of process, legal, strategic, organizational, and competitive perspectives (Adobor and McMullen, 2007 and Barker et al., 2009; Duncan, Yeager, Rucks, & Ginter, 2011; Ketchen et al., 2008 and Kim, 2006). However, the role of global supply chain responses as a critical linkage that overcomes severe supply chain disruptions has not been adequately explored. Therefore, this study discusses how Japanese manufacturing firms have responded to the recent earthquake, tsunami, and nuclear disaster in Japan. We identify critical supply chain challenges that manufacturing firms have faced in recent months on multiple levels (Kleindorfer and Saad, 2005 and Thun and Hoenig, 2011). More specifically, this article examines select Japanese manufacturing firms’ global supply chain responses to enormous disruptions on every front, including the loss of component part plants, design disruptions to products, manufacturing stoppages, logistics breakdowns, and infrastructure and electric power rationing. These firms’ supply chain lessons are noteworthy for disaster planning and recovery responses through global collaboration networks (Liao, Hong, & Rao, 2010; Maon, Lindgreen, & Vanhamme, 2009; Sawik, 2011). Based on case studies of how firms coped with severe natural disasters and humanitarian disruptions, this research offers a model of supply chain robustness related to supply chain design information (SCDI) and business continuity planning (BCP) (Craighead, Blackhurst, Rungtusanatham, & Handfield, 2007; Fujimoto, 2011). In particular, as an alternative measure to make supply chains more robust and cost effective, this study proposes ‘virtual dual supply chains,’ which enhance SCDI portability. Based on case studies of Japanese manufacturing firms, the aim of this study is to examine strategic supply chain restoration and recovery processes and consider how firms can effectively prepare for and respond to massive disruptions.

This article is unique in that it examines the impact of the recent supply chain disruptions in Japan. In response to potential major natural disasters, Japanese firms have naturally considered increasing their inventory levels, adopting standardized component parts, increasing the number of lines/facilities/suppliers, and relocating production centers. These timely case studies suggest that the outstanding responses to these natural disasters are not produced by the above-mentioned normal options but by robust and responsive supply chain strategies. Based on these cases, we believe that no Japanese firms have yet achieved SCDI portability in response to major natural disasters. Thus, it is important to further study how firms establish virtual global supply chains supported by increasing SCDI portability and virtual dual sourcing. Future research should explore design method details to construct virtual dual supply chains to deal with global supply chain disruptions.